Apocryphalist: “You see, Namewee, they [the ticket buyers] don’t like you, support you or even watch you for the entertainment value that it [Nasi Lemak 2.0] provides. They come to watch it due to the racial suggestive innuendo complex that you and your film provides … It’s the proviso that your persona promises to show dissent and hatred towards anything malay.”

Apocryphalist is correct on the fact that so many, many Chinese (half a million?) have rallied around Namewee as their embodiment of dissent.

He is also perceptive that Namewee’s persona embodies for them (the cyber Anonymice, AnonymousA and DAP Ah Hoe’s) the vicarious bravado of cocking a snook at symbols of Malay control or authority — police, school principals, bureaucracy.

Public reaction to the Namewee YouTube slagging Utusan was clearly polarized along ethnic lines and the viewers’ comments were a proxy race war.

The last I had a look at the Like/Dislike bar before the clip was disabled, roughly 98 percent of YouTubers who voted had clicked ‘Like’ to Namewee’s rant at Utusan.

However, just to set the record straight for Apocryphalist and others who have not watched the movie, Nasi Lemak 2.0 does not show or sow hatred towards Malays.

Apocryphalist discerns the hot lava flow of hatred. But he should realise that it’s not only against Malays alone.

Chua Soi Lek bears the brunt of it, don’t you think? Just look at all the sticks and stones they are forever throwing at him.

Even when Chua does something praiseworthily muhibbah, such as giving help to Hindu temples and Indian NGOs, DAP scolds and mocks him.

MCA is a victim of the same with being perpetually called “running dogs” and other vitriolic names (unprintable). And in the eyes of the Malaysian Firsters, blogger Tony Yew is ‘Judas’ (click here for a light diversion).

Below is what Penang Gerakan chief Dr Teng Hock Nan has to say about the situation.

This level where people of different ethnicity are suspicious of each other, the lack of harmony between the various income-level groups, the subdued participation of non governmental organisations (NGOs) in community service and the hatred towards certain groups who are portrayed as elitist, have resulted in an unfriendly climate of co-existence in society here, Teng said.

According to Teng, NGOs refrain from speaking out against the Penang state government due to fear of being branded as “Umno agents”.

“To those overcome by emotions, it is like Barisan did everything wrong for the last four decades. They get blinded because Lim [Guan Eng] feeds them with daily doses of hatred and at times, outright slander,” said Teng.

I can understand the angst, disgruntlement and resentment felt by the minorities. And they’ve laid it all on Namewee’s shoulders as the standard bearer. 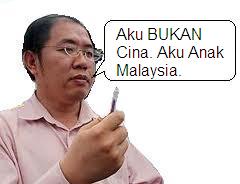 Voice of the Chinese

I’ve blogged about Namewee in order to juxtapose him with the politicians belonging to the political party that Malays assume to represent the Chinese.

Yes and no. True that overwhelming Chinese support is given DAP. Untrue that the party is acting in our best interest.

He and she and their ilk will bash anyone who dares to see Malaysians in terms of ‘us’ and ‘them’. Yet the reaction to Namewee’s movie and YouTube is just that — opposing groups of ‘us’. As in the split along other issues as well.

When Umno and Perkasa put a pig face on Namewee, isn’t that hatred too?

And the same Fauziah Arof argument can be applied to Namewee vis-a-vis Utusan.

Fauziah’s article is valid to claim that she’s not picking a fight with the movie but that she has issues with its director-cum-scriptwriter.

Similarly, the reason the Namewee YouTube resonated with so many supporters is that they have issues with Utusan the paper — its slant, its agenda, its mischief and instigation (even if Fauziah’s write-up is discounted altogether).

Admittedly Namewee more or less reflects Chinese sentiments on the ground. And his cameras lens are more honest than the DAP’s licik pretense.

So will you guys be equally honest and share what your side really, truly thinks? 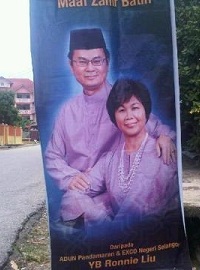 100 thoughts on “Do you Malays hate us Chinese?”