“Thus far, since the genesis of this phase of Christian bashing last May when a Christian plot to dethrone Islam was allegedly discovered in Penang to the Damansara Utama Methodist Centre controversy in August, this has been a story of plenty of smoke and no fire, of billowing fog and no facts behind it.”

“If you weigh your values only in the scales of your belief-system, you emerge, in a plural world, with a view that is so lopsided it makes you daft.” – Bishop Paul Tan

MUTAKHIR (Nov 20/Ahad): ‘Francis Loh takes over as Aliran president as Rama steps down‘ (Oooh, is there something nice awaiting Ramakrishnan post-departure given his high-octane enthusiasm for the Penang chief minister? Aliran’s ex-secretary Ariffin Omar has joined DAP by the way; Aliran does not allow its office holders to be card-carrying members of political parties.)

“Christian bashing has become a way of life for some unscrupulous people that their conduct seriously threatens to undermine our harmony. It would appear that these people are intent on causing chaos to promote their evil political agenda on behalf of the Barisan Nasional and Umno.” 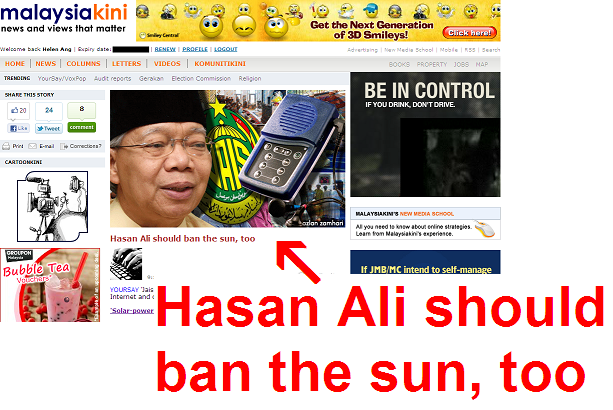 “Why does Hasan Ali think that the faith of Muslims is so fragile?” – Bishop Paul Tan

“Is the faith of the Muslims so weak and superficial that Muslims can be so easily swayed, induced and bribed to renounce their faith in spite of the fact “the al-Quran is disseminated through loud speakers, television, radio and at government functions,” as pointed out by former Perlis mufti Mohd Asri Zainul Abidin?” – P. Ramakrishnan

“Doesn’t this situation call for some soul searching as to why – in spite of great efforts made and billions of ringgit spent on building mosques, suraus, madrasahs, religious instructions, al-Quran reading competitions – all this had failed to strengthen the faith of the Muslims?” – P. Ramakrishnan

“Wild tales are being told and blatant lies are being spread with impunity. What is being done is to deliberately create uneasiness, anger and hatred against the Christians and their faith in order to undo our peace and unity.” – P. Ramakrishnan

“The latest claims by the Selangor Islamic Affairs Department (Jais) – that it had found that eight ways by which Christian missionaries are spreading the Gospel, one of which is by means of a high-tech device called a ‘Solar-Powered Handheld Talking Bible’ – is ridiculous and appalling.” – P. Ramakrishnan

“If Hassan has so much irrefutable evidence, then he should make a police report.” – P. Ramakrishnan

“If indeed there was evidence, then the culprits attempting to convert the Muslims should be prosecuted. Aliran very strongly supports such prosecution for any violations of the law.” – P. Ramakrishnan

“The very fact that no one has been charged so far would mean that Hassan and the others of his ilk should stop talking nonsense and behave in a reverential manner befitting their religious personage. They bring shame to their office and lose their dignity and they can never be looked upon as respected religious leaders.” – P. Ramakrishnan

“Wasn’t Lim Guan Eng made to serve 18 months of imprisonment for ‘spreading false information’? Why didn’t he deserve the tolerance that these people seem to be enjoying and benefiting from?” – P. Ramakrishnan

10 thoughts on “The bishop’s back, siap dengan sidekick sekali”