Shahrizat Abdul Jalil has so far gotten off very lightly.

“And even this event [departure of Shahrizat from the cabinet] is not an act on the part of anybody; Shahrizat was not sacked, nor did she resign, her status as minister merely becomes legally void when her term as a senator comes to an end on April 8, as under our constitution only a member of parliament or a senator can become a minister.” — Kim Quek, political commentator & author

Cartoon reproduced with permission from Zunar & check out his blog zunarkartunis.blogspot.com 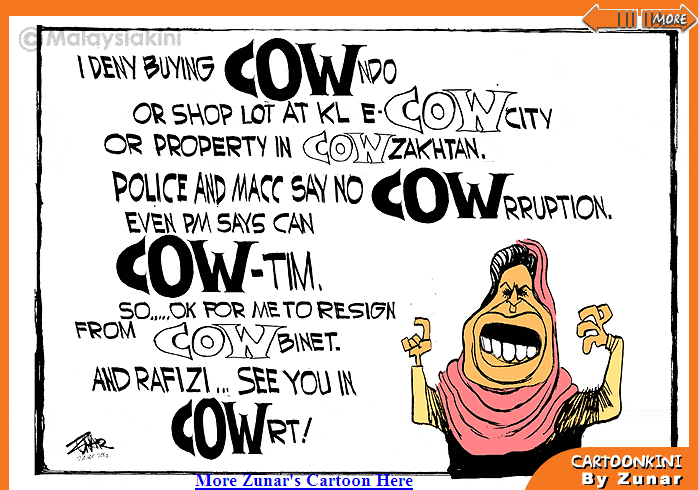 When I made my first posting (21 Nov 2011) about the coddled cows, some readers reacted defensively as if any implied criticism of Shahrizat and her family was an attack on the Malay race itself and the opportunities for Malays to benefit from government help.

I’m sure Malays realise that Shahrizat’s family does not need financial assistance unlike say fishermen families in Terengganu or the urban squatters in KL. Yet the knee-jerk response was to lash back and regard the comments as coming from the enemy (Chinese) or the competitor (anti-Umno opposition).

The same attitude is seen with regard to the Kentucky Fight Chicken. Now imagine a situation (not necessarily at KFC but any other F&B service) if the customer was Malay and the staff Chinese. If the Chinese worker had punched the Malay customer, would we still hear the line that the customer had provoked the worker and deserved to be hit?

Would Malays care that the Chinese serving staff was overworked and underpaid? Or could such a thought even cross the mind to begin with?

I don’t know about you but I see a lot of honest, hardworking Chinese around. And they’re not necessarily well-off. How much do you think the mechanic at the motor repair shop earns or the girl selling handphones at Low Yat plaza?

If there are no longer any Chinese people around to be made the scapegoat and bogeyman, we’re still going to have the Shahrizat family monkey business.

Yes, please do try to imagine Malaysia emptied of Chinese citizens. And reflect whether in a country without a Chinese minority you’re going to respond any differently when complaints of police brutality or corruption in government departments arise.

Will the suspected wrongdoers then be spared scrutiny? Because it seems to me that now, every time something like the Shahrizat case happens, a defence mechanism immediately kicks in to protect one’s “own kind” and to shield “Malay institutions” (police, civil service, KFC workforce, etc).

39 thoughts on “Not everything is an attack on Malays”