In its heyday, Malaysia Today was ‘the’ watering hole for Chinese online readers. If anyone has had enough interaction with the Chinese cyber community, it’s the MT super admin Raja Petra Kamarudin.

Yesterday, he penned a column about his erstwhile worshippers. I’m excerpting a few paragraphs below in bullet points.

Daim Zainuddin recently said something that the Chinese do not want to hear.

Again I shall excerpt in bullet points from Daim’s interview with Nanyang Siang Pau.

From the article ‘Daim warns Chinese voters of risks of their choice‘ (21 March 2012):

[Helen’s reply: Actually, their supporters even believe that Pakatan have the ability to make it snow in Malaysia.] 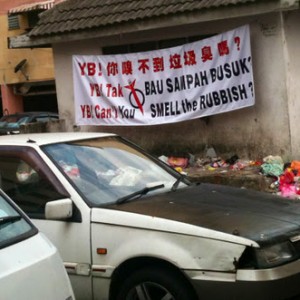 A conundrum that bears some thinking (see above) is Hannah Yeoh’s tweet that she is “constantly amazed by MCA’s loyalty to Umno”.

It really is a God-given talent how this evangelist Yang Berhormat manages to channel the lowest common denominator of the mob mentality. It must be something in the water that they drink.

The complex Umno-MCA relationship is not something to be so lightly dismissed in a 140-character tweet. Yet for them, anyone who does not hate Umno with the same intensity that the DAPpers do must be either immoral or an idiot.

I’m not sure how the Umno-Malay side of the equation sees this.

But Chinese voter sentiment is clear to all.

Dong Jiao Zong’s alignment with DAP marks a milestone. With this, the Chinese have chosen their path, irrevocably. It looks like there’s no turning back nor sidetracking.

Daim said that “whatever pressure applied by the Chinese would evoke a counter-pressure from the non-Chinese”. But the 80-90 percent Chinese who are following DAP’s tune appear oblivious to Newton’s third law of motion.

62 thoughts on “Daim makes sense but the Chinese are fey”