The Malay beachhead of Ariff Sabri (Sakmongkol), Aspan Alias and Zairil Khir Johari in DAP is giving voters the worst of two worlds. It’s like a smart but ugly as sin millionaire marrying a gorgeous dumb blonde, and the poor kid inheriting the father’s looks and the mother’s brains.

“Our beloved CM” is a term introduced to this blog by one Penang-based, staunchly pro-DAP reader ‘Pala Richie’ (comment #25 here).

It wasn’t too long ago that Lim Guan Eng attempted to discredit S.M. Mohamed Idris, president of the Consumers’ Association of Penang (CAP) for daring to question the billions-ringgit mega projects for the island.

In his press statement on 13 March 2012, the beloved chief minister said:

“CAP is not the only organization that has opposed the 4 infrastructure projects. Even BN and Deputy Prime Minister Tan Sri Muhyiddin Yassin has opposed the construction of the undersea tunnel from Gurney Drive to Bagan Ajam on 17 November 2011.” 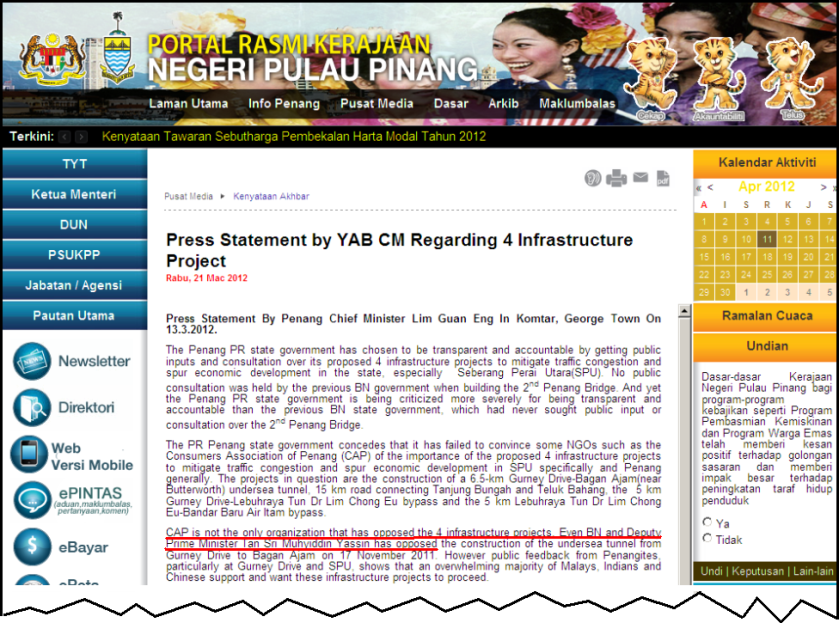 Guan Eng’s calculated innuendo associating CAP with Muhyiddin signalled a green light for aspersions to be cast on Idris’s motives.

One hardcore DAPster in Malaysiakini suggested that Idris wanted to stand for election on the Gerakan ticket (Idris is 86 years old, by the way).

Others denigrated him as a “typical mamak” in cahoots with Umno (screenshots of Malaysiakini reader comments, below). The barrage of insults included accusations that he was “talking rubbish”, his “antics” are “malicious”, “Idris has lost all credibility” plus already sold out. Predictably they capped it all by telling him to shut up.

“Idris is also just finding out what objecting to the DAP entails. He was visibly shocked … Welcome to the world of DAP politics, Uncle Idris!” (Source, here)

Any critic foolhardy enough to cross the path of the Lim First Family (whose favourite overt weapons are gag order and lawsuit) requires a constitution as strong as an ox and a hide as thick as a rhino.

Zairil Khir Johari writing a defence of his boss, said:

“While NGOs such as CAP have the right to differ with the public consultation process conducted by the state government, Lim believes that such differences of views should be voiced out in a civil manner.”

Zairil’s statement imputes that CAP has not been civil in its manner.

That was the Guan Eng political secretary last month. Today, Zairil is again doing his job polishing the Dear Leader. The scant few Malays … (sad) … on DAP patronage are seen to be often busy with this monumental task.

The subject of Zairil’s column in The Malaysian Insider is “one particular political commentator”. Although Zairil’s article is 1,268 words long, Khoo is not mentioned by name but instead referred to as “our commentator” 9 times.

Zairil’s method is identical to Ridhuan Tee who sidesteps naming anyone specifically but invariably resorts to calling his target(s) an “ultra kiasu” (individual) despite providing enough description so the person concerned can still be identified.

There’s no doubt that Zairil meant Khoo, whose own article TMI had published on Monday bylined to ‘Gavin Khoo’ here, and in his own blog appearing the same day, here.

Among the TMI reader responses to Khoo are: “I believe the writer is a paid trojan horse of corrupt Umno and BN” (21 thumbs up), and “You are a pathetic ‘lap dog’ …hope you are well paid… at least with a month’s supply of dog food”.

Don’t blame the supporters’ behaviour for they are only following in the direction set by their party leaders. Here’s Zairil:

Zairil continues with the putdowns: “Reading the string of articles that [Khoo] has churned out recently” … “his often incongruous arguments and feeble attempts to claim the moral high ground” … “so myopic and borderline obsessive”.

This is how Zairil places Khoo’s criticism in a nutshell:

The Bayan Mutiara project is Dijaya’s, a company belonging to Tan Sri Danny Tan (brother to the famous tycoon Vincent).

Zairil is claiming that the sale price of Bayan Mutiara “was, by anyone’s imaginations, a tremendous profit for the state”.

[Hey, nice to know that the DAP-controlled state is enjoying tremendous profits!]

Details of the Bayan Mutiara transaction are rather complicated. However the state opposition, Umno, has taken up the cudgels and their blogger’s network hotly pursuing the story. BigDog has the ‘Bayan Mutiara Guanomics‘ profile, a compilation of the essential facts.

[Sigh, just because I link BD here, the DAPsters will start their “guilt by association” smear tactic, like how Guan Eng tried to associate CAP with Muhyiddin. Bapa streetfighter borak, anak DAPster rintik.]

Zairil uses his Malaysian Insider platform to mock Khoo for expressing “concern about the DAP’s desire to embrace the market and promote commercialism to the benefit of the rich and the expense of the needy”.

To which Zairil pours scorn: “I really don’t feel that any explanation is needed to debunk this argument.” Well, Zairil seems to think it is beneath him to respond to the complaint that the poor are being (housed) priced off the island.

Khoo – who only expressed what’s been on the mind of many other Penang watchers and the lower income groups – should only expect the same treatment as Uncle Idris whose organization CAP pulled out of the Penang Forum after their unfortunate brush with the Dear Leader.

Zairil, on the other hand, was recently appointed CEO of Penang Institute, courtesy of the CM’s office.

The NGOs may be unhappy but who cares. Penangites are happy. It’s after all they who count. And Zairil is showing them what he’s made of: Yang Berhormat material cut according to DAP cloth.