Below are screenshots of the Malaysia Chronicle front page today as well as the news portal’s article on Tunku Aziz.

Another picture for the Tunku Aziz article in Malaysia Chronicle is a Photoshop of a rubbish dump filled with personalities such as Ummi Hafilda Ali, Ezam Mohd Nor and senator S. Nallakaruppan who are hated by opposition supporters. 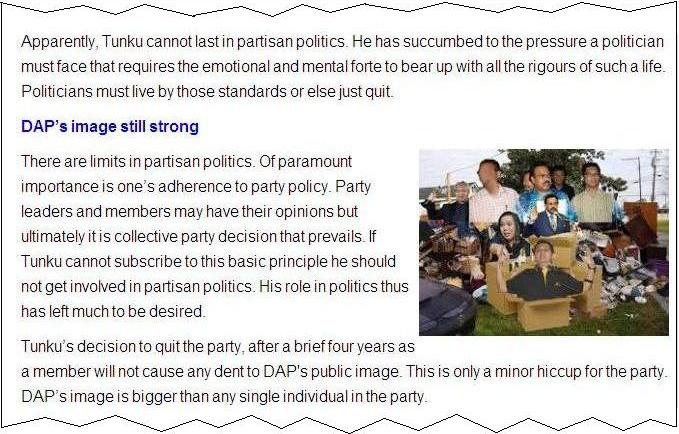 Behaviour like this could be one of the reasons why Zaid Ibrahim says ‘Pakatan leaders have an attitude problem‘.

In his blog yesterday, Zaid writes: “Fortunately for the Barisan today, the Pakatan opposition suffers from the same ailment [of arrogance] and they haven’t even reached Putrajaya yet.”

“The Pakatan’s arrogance is not just on policies. They have leaders who ‘look down’ on others who do not share their views. I had my fair share of that treatment. When I left PKR, I was described as a Trojan horse. Then Karpal described me as a man without principle and integrity but he gave no reasons other than the fact that I had left the party over a scandalous party election.

“After that, Khalid Samad, the PAS MP for Shah Alam, described my new party KITA as a tool “sponsored by Umno.” These arrogant leaders have not had the slightest evidence or proof to back their accusations.

“The latest incident involving Tunku Abdul Aziz Tunku Ibrahim is a clear sign that the Pakatan will not tolerate even the slightest disagreement. I have had disagreements with Umno for many years on various policy issues – but it was only on the ISA issue that I was sacked, and even then after 25 years of ‘causing trouble’ in the party.”

Zaid also chips in his 2 sen on how PAS has become very vocal about its intention to implement hudud which he sees as a sign of political arrogance too because the party has not consulted others – including Muslims – to see if such a law is in fact necessary.

“The only response from the Pakatan is the usual warning by Karpal Singh that PAS should stop talking about hudud. This was followed by Dato’ Seri Anwar Ibrahim holding hands with DAP and PAS and saying something silly like “we will only do it if all the parties agree.”

“Well, they have not agreed but PAS keeps talking about it. So whom should we believe?”

Zaid’s article can be read in full at http://zaiduntukrakyat.com. Please leave your comments there.