A survey by Merdeka Center on the prime minister’s approval rating post-Bersih 3.0 showed that satisfaction with him remained very high still at 82% among lower income (<RM1,500 monthly) respondents.

However the poll found that only half of middle-class households (RM3,000-RM5,000/mth) were satisfied with the PM.

Dissatisfaction was greatest among the Chinese where only 37% approved of Najib Razak. The percentages were 79% and 72% respectively among Malay and Indian respondents.

Merdeka Center’s earlier poll in February had similarly shown that the Chinese (red line, chart below) were the ones most unhappy with Najib. The Chinese dip hitting the low point of 38% in 2011 coincided with the Bersih 2.0 period.

The Indian dip at 65% (yellow line) in Feb 2011 coincided with the anti-Interlok rally and complaints that Indian schoolboys had been bullied and called “pariah”.

Chinese also had the poorest perception of the government. Only 17% were happy with the authorities, the findings this year indicated.

And the more money people make, the more critical they are of the government. 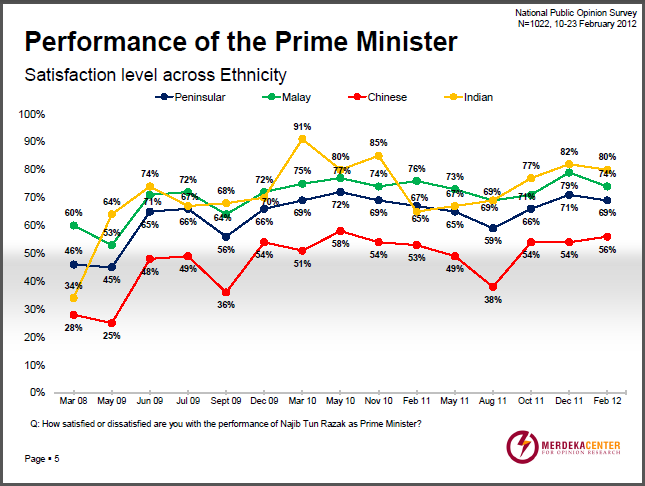 For the first time ever, there was an open breach in the public opinions of Dr Mahathir Mohamad and his eldest daughter.

Where they diverged was when Marina declared, “No one was being provocative”.

Talking about how the police “brought out the trucks, and the guys in helmets and shields”, Marina added, “I thought it was an intimidation factor, to just have them [the FRU] standing there”.

Asked her thoughts on the rally’s link to Pakatan, she responded:

Harakah has these stories: ‘Father and daughter in public spat over Bersih 3.0‘ and ‘Mahathir’s daughter: If we’re not Egypt, why fear Bersih?‘

Taking the opposite line, Marina’s pro-Bersih stance turned her into an anti-establishment icon among urban and English-speaking supporters of the movement.

What caught my attention, however, was a bald statement that “Bersih has a largely middle-class following”. This may be true with regard to the Bersih 3.0 Chinese whereas 1.0 had been largely a Malay working-class affair. 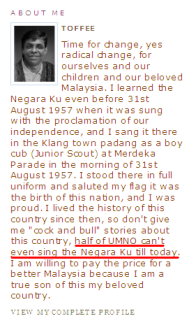 Marina is not middle class by any stretch of the imagination. She once wrote in her Star column about having a cook.

Someone who can afford to employ a cook (not a maid mind you but specifically a cook) as domestic help is a rich woman in my books.

Plus she’s known to have sent her daughter to international school — elitist and expensive lor.

Yet Marina has managed to position herself as the darling of the middle class. It makes sense to surmise that these people are her readers, particularly the ones faithful to her longstanding column in The Star.

To pull together the various threads of narrative, this is what I think:

Bersih 3.0’s middle-class crowd adore Marina and read her not only in The Star but devour news or feature write-ups on her in the portals such as The Nut Graph, Malaysiakini and others as well as read her blog which is popular on the Bangsar Malaysian blogroll.

[Read also Marina’s latest posting, i.e. a claim that she is being impersonated in cyberspace.]

I’ve never read anything by Marina written in BM.

Those who buy newspapers only in one language – say Utusan, BH, Sinar Harian, Kosmo! or and the Chinese/Tamil papers – unless they also read bilingually may not be as enamoured. So the English language is a primary factor.

From some of my less-than-edifying encounters with Netizens, I’ve noticed that those who love Marina usually also love Yasmin Ahmad. These acolytes are the Hosanna Haw-Haws hoping to pindah rumah from Kepong and Jinjang to Subang Jaya and Damansara Utama.

Don’t EVER call them Indians!

Members of the Marina fan club are Malaysian Firsters. They are of the same ilk as that ‘Toffee’ guy and the chest thumping girl.

Toffee’s hatchet job on P. Uthayakumar is something cheered on by the Firsters as they’ve been consistently hammering Hindraf for not toeing their ‘beyond race’ line.

Since The Star does not have an interactive reader’s forum like the portals, I’m screengrabbing comments from The Malaysian ‘Christian’ Insider .

The Chest-Thumping Girl who’s a TMI columnist got typical Firster reader responses (below) to her Bersih 3.0 rallying cry.

It’s fair enough to split Malaysians down the line of pro- or anti-establishment according to how they feel about Bersih 3.0.

I’ve suggested before that The $tar has got a split personality with regard to its coverage of MCA versus DAP. The Star persona can be linked to the “my mother tongue is English” attitude (HERE).

The paper’s readership is different from the demography of Sinchew, Nanyang, Guangming and China Press except for a small overlap. The key element is English. It is this middle-class language factor that binds the Toffees to the DAPsters to Bersih 3.0. 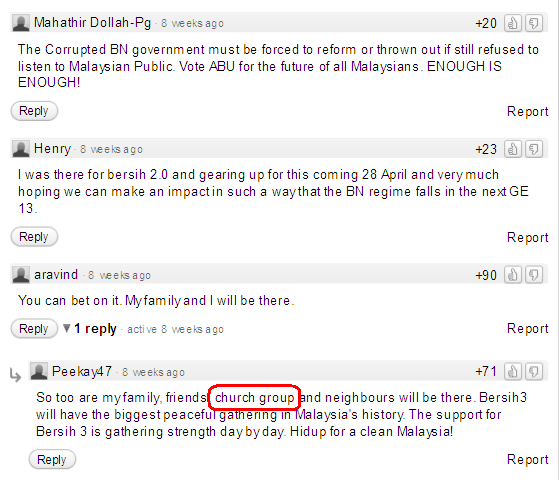 63 thoughts on “Dr M, his daughter and the middle-class malaise”