Wrt yesterday’s posting Slash gets star, for the very young readers clueless why the guitarist deserves his spot on the Walk of Fame, this video might jog your ears.

While Slash is music to the ears, it was otherwise most grating to hear Kim Guan Eng in Debate 2.0.

When Kim was speaking, I actually felt sorry looking at Chua Soi Lek (every time the camera had the latter in frame) for having to endure at such close quarters the tirade by his opponent.

Nonetheless despite my sympathy for the ordeal suffered by the underdog – Dr Chua holds no government post whereas Kim is a chief minister, an MP and an Adun – I think it is good that FMT writer ‘Iskandar Dzulkarnain’ threw everything and the kitchen sink at the MCA yesterday.

If a kitchen sink hitting the party smack on the head still can’t wake up its top leadership from their collective stupor, then I’m afraid the MCA ship will deservedly capsize.

MCA gets slashed by Star

The views expressed in ‘MCA has become champion of petty issues‘ are too partisan. But then again, the crowd that the FMT writer is addressing are even more so … see how 806 readers are ‘Happy’ with his MCA-bashing.

Below are excerpts (in red) from Iskandar Dzulkarnain’s article:

To the above I will add that between 8 March 2008 and today, MCA has not only failed to stem its slide in public perception but also that the slide is steep. Yet how can MCA improve in public perception when its own media fails to explain the bigger picture-cum-the MCA historical position to the general public?

One example is Dr Chua’s perspectives in Debate 2.0 which resonated with the Malay audience who saw him as being reasonable and pragmatic. Yet over the last five years, it has been mostly the DAP incitement of grievances and victimization taking centrestage in the non-Malay media (includes Star).

Has MCA taken stock of the reason for its abysmal failure in communicating? Answer: See picture.

If The Star‘s own National Union of Journalist (NUJ) chairman Teh Eng Hock could tweet such mockery of the entire MCA federal cabinet, don’t you think that its readership too are well aware of the disdain held by the party’s machinery for the establishment?

I’ve been reading a variety of online commentary about the Soi Lek vs Guan Eng debate. Malay blogosphere on the whole reacted favourably to the MCA president’s 2.0 outing but this does not come across in The Star (with the exception of Joceline Tan’s analysis).

You really have to wonder how it is that Malay bloggers have been rooting for Chua Soi Lek through their positive write-ups when MCA’s Anglophile media reeks with barely hidden contempt.

While the senior editors such as Wong Chun Wai may not openly side with DAP, this is not so with the rest of the publication. The same contempt harboured by the Star NUJ president (the tweeter who alluded to Rosmah Mansor as “Big Mama” had held his NUJ office until end-May 2012) is similarly discernible in other Star middle-ranking reporters.

This contempt for MCA is evident in the public Twitter exchanges between some of the Star journos and their colleagues in the Pakatan media as well as with their politician buddies — the DAP hyper-tweeters.

Star staff may owe their paycheque to MCA but their political allegiance to DAP should nonetheless be respected as an individual’s democratic right. Unless the situation is akin to the Teh Eng Hock case where as Star NUJ president at the time, it was a breach of etiquette to be tweeting insults when he was on the job.

Is MCA naive enough to think that its newspaper bucks the current trend of Chinese support for DAP?

To the first statement, I might add that not only Umno but MCA’s lifeline (i.e. the Malay voters themselves) are at the end of their patience with the Chinese party.

This has partly to do with the handling of certain issues such as the ‘Allah’ contestation, DUMC and The Star‘s gung-ho pursuit of advertising revenue resulting in gaffes like the Ramadan pork ribs. Content analysis of the paper clearly shows up its pro-Christian bias.

Some of the Umno-linked influential Malay bloggers can see how The Star‘s slant towards the Christians has caused the paper to deliberately downplay scandals such as the City Harvest Church’s alleged S$51 million fraud and to close one eye to the Singapore church’s Subang Jaya connection.

Not only is MCA considered as not pulling its weight, The Star‘s covert pro-opposition bent makes its reliability suspect in the critical last lap for BN before the GE.

Lastly I would like to give my own take on two further points made by ‘Iskandar Dzulkarnain’.

Firstly, anyone who’s watched the debate can compare the way Chua speaks with the way Kim does.

Secondly, ‘Iskandar Dzulkarnain’ believes that it is “MCA’s inaction that has turned the DAP into a political giant”.

I’d like to suggest that it is The Star‘s hagiography and fawning on DAP personalities as well the paper’s neglect of MCA personalities (again, how many of you are able to name the Wanita MCA president?) that has contributed to the Christian-DAP popularity.

This promotion need not necessarily be in direct terms but through the paper providing copious endorsement for public figures who push the DAP line.

Or to give an opposite example, when NST prominently airs the views of Dr Chandra Muzaffar or Prof. Khoo Kay Kim, it is the pro-establishment (pro-Malay) line that is featured. Thus when The Star gives prominence to the views of, say Ong Kian Ming (which the paper frequently does), then quite naturally it is the pro-opposition views that are channeled.

‘Iskandar Dzulkarnain’ also believes that “disgruntled Chinese [have] turned to the DAP in droves for salvation”.

The political vocabulary used against MCA – such as “shame on you”, “part of the [BN] evil empire”, “robbers and thieves”, “prostitutes and whores”, “lacking integrity”, juxtaposed against the DAP saints and saviours (i.e. giving hope of “salvation”) – bears some scrutiny.

This Christian-flavoured lexicon is without doubt prevalent in the online media.

While The Star may avoid the overt use of such derogatory descriptions against BN, the paper’s national coverage (see picture) nevertheless speaks a thousand words about its editorial inclination.

With pages like the one below, how to tell The Star apart from Buletin Mutiara? 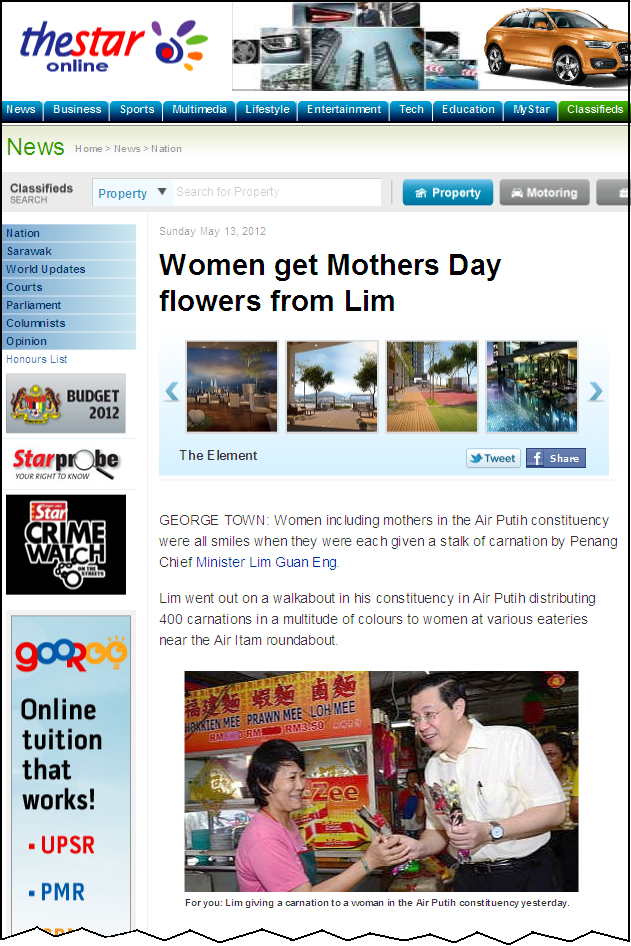