“The man’s natural propensity to adopt intransigent and provocative urban guerrilla tactics in dealing with the press has not endeared himself to them. I notice that even the once sympathetic Chinese language papers have had enough of his belligerent, bullying behaviour.”

“Obviously it does not take much to penetrate the chink in his armour. This is evident from his savage reaction to even a perfectly innocent press enquiry about the sudden departure of his special officer …”

To have the former vice chairman of DAP openly, and in print, call out Kim is a watershed.

‘Blame and hate’ on Planet Penang

Giving his take on current developments, the Tunku further adds:

“He is, apparently, savvy enough to know that even as he is taking on all comers, he is falling into the very pit that he is so good at digging for his unwary political opponents or, for that matter, anyone who disagrees with him.“

Then follows another description by Tunku Aziz that can only come from his Queen’s English and which will reverberate in a future biography of Kim as among the most picturesque.

“It is ironic that Penang, which has produced thousands of talented men and women in every field, must depend on a politician who is part of a travelling family political circus.
.
“Lim is generally credited with giving a new twist and a sharper edge to the ancient pastime of blame and hate, a black art form much in vogue within DAP, and at which he has become rather accomplished, with unlimited practice time from day one of succeeding the Gerakan-led administration.”
.

The Tunku’s parting shot at Kim on coming clean over Rainbow:

“My advice to him is to be true to at least two of those principles that he has been hawking, namely, accountability and transparency.”

.
All the more reason for Kim to take up the challenge thrown by Tunku Aziz because, in the latter’s words (in which there is more than a hint of sarcasm), “the likes of Lim offer themselves as professionally and ethically suitable candidates to provide principled leadership” and therefore must live up to their own billing.

Tunku Aziz’s thumbnail of Papa DAPster is drawn from his own up close and personal experience of the DAP central high command over the last 4 years.

As the Dear Leader is, so are his faithful disciples.

Blaming and hating has been turned into an art form within the DAP, according to Tunku Aziz, plus given a new twist and sharper edge by Kim and his coterie.

They are quick to take offence but have no awareness of the great offence they cause to others.

Extrapolating Tunku Aziz’s characterization of Kim as inflexible and unable to compromise onto the typical of his followers, we can see how they have commenced a provocation by employing “urban guerrilla tactics”.

How the DAPsters deal with opponents, or for that matter anyone who disagrees with them, is by a “belligerent, bullying behaviour”.

It is the Beloved Chief Minister who has sanctioned belligerence and bullying through leadership by example.

The Star rooted in Planet Penang

Despite Kim and his DAPsters reacting so savagely to all comers, they still want to claim the moral high ground in insisting that they are the only ones who are “ethical” and “principled”. This noticeable tendency by the DAP self-proclaimed paragons to putar-belit makes it easier for the majority of Malays to lend credence to Tunku Aziz’s account.

Yet the response of DAP Chinese supporters is poles apart as if we’re living on two different planets. Why?

One reason is illustrated by the fact that the Beliawanis MCA treasurer (who called two DAP icons “superCyber Bully”) is given almost zero coverage by The Star whereas her DAP rival (the “superCyber Bully” vying for the same state constituency seat) is accorded saturation publicity.

Over the last 5 years, The Star has consciously striven to paint a sweet and rosy sheen on Christian DAP 2.0. 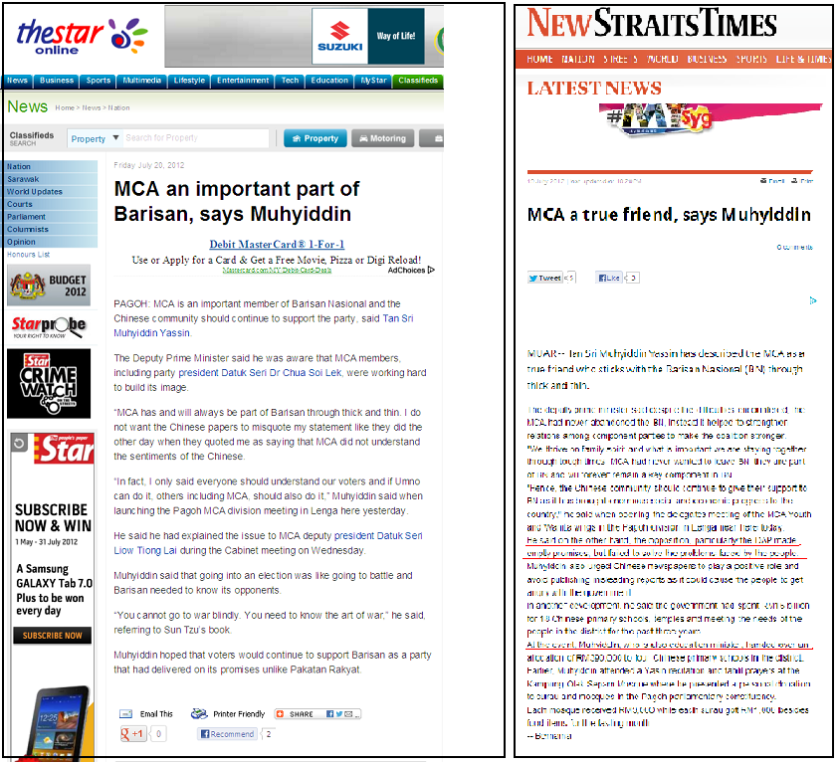 Only a couple of days ago on July 20, The Star and NST both carried reports on the visit to Pagoh by deputy prime minister Muhyiddin Yassin.

The Star‘s article is ‘MCA an important part of Barisan, says Muhyiddin‘ (215 words).

First, the different tack taken by the headlines where Star plays up MCA’s “important” role in BN whereas NST spoke from the Umno point of view.

Next, NST informed its readers that Muhyiddin had said “the opposition, particularly the DAP made empty promises, but failed to solve the problems faced by the people”.

The way The Star reported it:

.
“Muhyiddin hoped that voters would continue to support Barisan as a party that had delivered on its promises unlike Pakatan Rakyat.”
.

As I’ve said previously, The Star blacks out negative news about DAP and especially of the party’s evangelical stars.

If Muhyiddin indeed said “the opposition, particularly the DAP made empty promises” as quoted, why couldn’t Star simply report? Why was his criticism specific to DAP deliberately omitted? After all, unlike Kim’s posse of gunslingers, there are no Muhyiddin’s cowboys riding around town shooting critics.

There are other details in the NST story that are missing from The Star.

Muhyiddin is inevitably portrayed by alternative media as a Malay ultra and Umno hawk but yet as Education Minister, he presented cheques amounting to RM0.4 million to Johor Chinese schools. Why does The Star fail to tell its readers this important fact when NST could do so? Was it because the act might soften Chinese hearts just the teensiest-weensiest bit?

Is The Star sabotaging BN by burying items unfavourable to DAP and at the same time hiding news that would cast a softer light on Muhyiddin the Firster’s favourite bogeyman?

16 thoughts on “The Star covering up for DAP, sabotaging Umno?”