Yup, that about describes the headline below in The Star today — ‘Woman who killed herself may be a murder victim’

Clap, clap, clap. Our MCA-owned paper has just gotten itself into the International Hall of Fame. 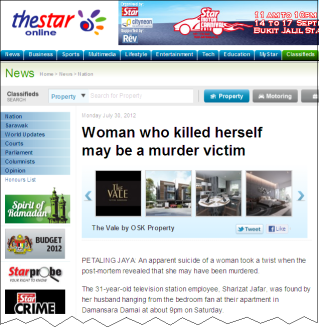 Alongside these other world famous, real newspaper headlines:

The other local papers reported the same story (headlined by Scissors as ‘Woman who killed herself may be a murder victim‘) more sensibly. Note that Scissors even spelled her name wrongly.

Meanwhile the sixth official from City Harvest Church was in court on 10 charges of CBT and falsifying accounts. This latest news was reported in Wall Street Journal, MSN, Channel News Asia, Straits Times, Business Times and other papers.

But The Star consistently fails to update on the City Harvest Church scandal despite the local connection of Subang Jaya.

Another big Christian story this week is the Christian Federation of Malaysia controversial letter by Bishop Ng Moon Hin.

But The Star is oblivious to this CFM-Bishop Ng story. (UPDATED: see below) Does the MCA paper have a pronounced allergy to Christian-linked stories that may put DAP in a poor light?

So what does the ‘M’ in MCA stand for? Murdered (by own media)?

Urm, somewhat like that muddled headline in The Star today — ‘MCA that killed itself may be a murder victim’.

So many stories missing from The Star. Oh, but guess what?

Remember the ‘Oi Big Mama’ tweeting reporter? Well, he was given a byline a couple of days ago for this write-up (below) featuring Hannah Yeoh.

Describing the event that The Star gave prominent national coverage to, Hannah retweeted, “MCA is finished” and “MCA is doomed”.

The Star did carry the Bishop Ng Moon Hing story. However, the article failed to turn up when I initially did a Google search because the paper had misspelled the Bishop’s name, just as it had misreported the TV9 admin exec to be Sharizat Jafar when the deceased was Syaleza Jaafar.