“A couple of days ago, I’d asked what is Raja Petra’s game plan?

I asked because I anticipated that Christian Talibans would react to Raja Petra’s Rosmah-Chong Wei article the way he fully (three-quarters? half?) expected them to. And we were both not ‘disappointed’ by the wholly predictable Malaysia Today reader comments, so to speak.

Yesterday, Raja Petra penned ‘Clinging to hope‘. I’m now wondering if he assesses that he’s making some little headway with “them” or whether he feels a stronger medicine (the game plan which he has either already strategized or that he’s in the process of structuring) will be required.

Anyway, his responses to his readers as below. I think they’re worth featuring and for you to read (double click). 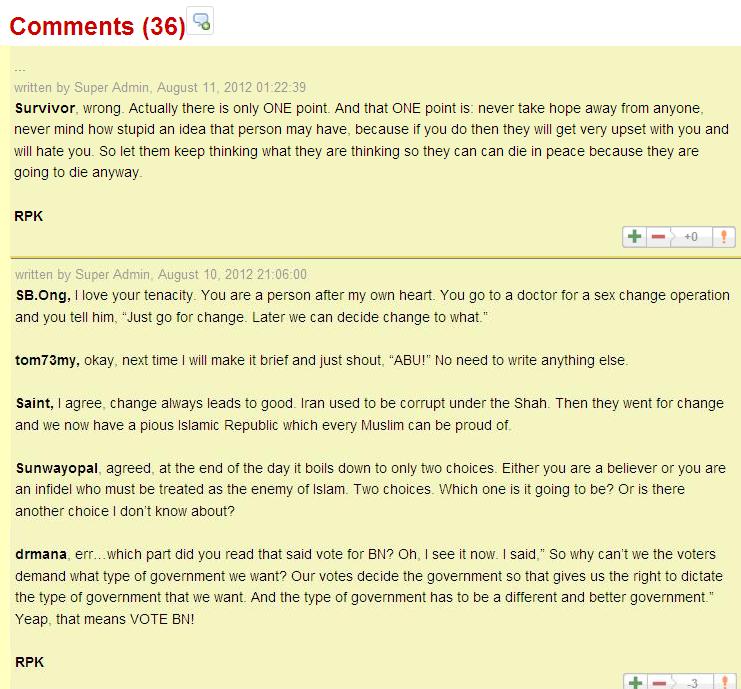 In Raja Petra’s reply to ‘Saint’, he writes:

“I agree, change always leads to good. Iran used to be corrupt under the Shah. Then they went for change and we now have a pious Islamic Republic which every Muslim can be proud of.”

The Reign of Terror by stormers of the Bastille

Zaid Ibrahim said the following in a speech delivered at the launching of his book in end-May 2012:

“Indeed, history has shown us that social and political changes take many forms. Some are brought about peacefully, others less so. We remember  the French Revolution where the struggle for freedom from oppression, and for liberty and equality, took many long years to realise.

We remember the infamous Reign of Terror and that its worst leader, Maximilien Robespierre the so-called Incorruptible, said: “the Government in a revolution is the despotism of liberty against tyranny.” He also said that “Terror is nothing other than justice: prompt, severe, and inflexible.”

So, in the name of revolution and liberty, the world came to know of the Guillotine. Its victims included the famous ancien regime: Louis the Sixteenth, Marie Antoinette but  also some 40,000 others, including leaders of the Revolution themselves, lost their lives to those more interested in the exercise of power than in upholding justice and preserving a democratic government.

And we must not forget that France today is in its Fifth Republic, and that French democracy as we know it has arrived by a long a difficult road. Since the famous Declaration of the Rights of Man in 1789, the country has gone through seventeen separate Constitutions. The latest, establishing the current Republic, was adopted on the 4th of October, 1958 – over a year after Malaya gained its Independence.

The French Revolution was not the only example of a people’s mass desire for change going tragically wrong. More recently, we remember the Iranian Revolution of 1979, the effects of which are still felt acutely by millions of people today.

Spurned by disenchantment with the despotic rule of the Shahanshah Mohammad Reza Pahlavi, and seeking greater freedom and economic justice, the people of Iran overthrew their King of Kings. By referendum, they replaced their western-oriented monarchy with a theocracy.

Their joy was short-lived. The Paradise of the velayat-e faqih – the Guardianship of Jurists – did not materialise. There was no swift Islamic justice, no economic transformation, no freedom and liberation for women and minorities. Instead, the Grand Ayatollah, Ruhollah Musavi Khomeini, created an oppressive regime that has plunged Iran into perpetual war, with the world and with its own people.

And so, thirty years later the Iranian people are seeking another Revolution to save them from the last one.”

Reign of Terror is a ‘change’ from the previous regime

Since Zaid brings up the topic of ancien regime, here’s what Alexis de Tocqueville had to say in his ‘The Old Regime and the Revolution‘.

The French Revolution must be compared to a religious revolution, if you want to find an analogy to help in understanding it. [ … ]

It is a political revolution which inspires conversions …

Religions usually consider man in himself, without regard for what the laws, customs, and traditions of a country have added to the common base. Their principal purpose is to regulate the relationship between man and God, and the general rights and duties of men toward each other, independently of the form of society. The rules of conduct which religions prescribe relate less to the man of a particular country or time, than to the son, the father, the servant, the master, the neighbor. These rules are based on human nature itself; they can be equally accepted by all men and they are equally applicable everywhere. Thus it can be seen that religious revolutions have often had vast scope and are rarely limited, like political revolutions, to the territory of a single people, or even to a single race. And if one examines the subject still more closely, one finds that the more a religion has the abstract and general character which I have just described, the more it spreads, despite differences of laws, climate, and men. 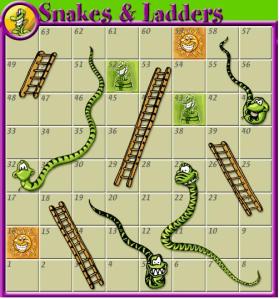 The pagan religions of antiquity, which were all more or less linked to the political constitution or the social state of each people, and which preserved even in their dogmas a certain national and often municipal appearance, were ordinarily confined to the limits of a territory, which they rarely left. They sometimes gave birth to intolerance and persecution; but conversion was almost entirely unknown to them. Thus there were no great religious revolutions in the West until the arrival of Christianity. Christianity conquered in a short time a great part of the human race, easily crossing the barriers that had halted the pagan religions. I do not think it is lacking in respect for that holy religion to say that it owed its triumph in part to the fact that it, more than any other, was separate from all that might be particular to one people, to one form of government, to one social state, to one time or one race.

The French Revolution operated, with respect to this world, in precisely the same manner that religious revolutions have acted with respect to the other world. It considered the citizen in an abstract manner, outside of any particular society, the same way that religion considers man in general, independently of time and place. The Revolution did not only ask what the particular rights of French citizens were, but what were the general political rights and duties of men. Because it always went back to that which was least particular, in other words to that which was most natural with respect to social state and government, the French Revolution was able to make itself accessible to everyone and was immediately imitable in a hundred different places.

Because the Revolution seemed to be striving for the regeneration of the human race even more than for the reform of France, it lit a passion which the most violent political revolutions had never before been able to produce. It inspired conversions and generated propaganda. Thus, in the end, it took on that appearance of a religious revolution which so astonished its contemporaries. Or rather, it itself became a new kind of religion, an incomplete religion, it is true, without God, without ritual, and without a life after death, but one which nevertheless, like Islam, flooded the earth with its soldiers, apostles, and martyrs.

Furthermore, one must not think that the procedures which the Revolution employed were absolutely unprecedented, and that all the ideas which it brought to light were entirely new. In all eras, even in the High Middle Ages, there have been agitators who, in order to change particular customs, have invoked the general laws of human society, who attempted to oppose the natural rights of man to the constitution of their country. But all these efforts failed. The same spark which set Europe afire in the eighteenth century was easily put out in the fifteenth. Indeed, in order for this kind of argument to produce a revolution it is necessary for certain changes to have already taken place in conditions, customs, and mores, which prepare the human mind to accept it.

There are times when men are so different from one another that the idea of one law applicable to all seems incomprehensible. There are others when it is enough to show them, as in a glass darkly …”

Raja Petra in his ‘Clinging to Hope’ article wrote:

“Try telling someone that all politicians are the same and never mind which government comes to power you are still going to see the same sorry state of affairs and see the reaction.”

DAPsters are, methinks, in a state of religious frenzy.