Kesian Ustaz Nasha. On the eve of Hari Raya, DAP calls for his sacking.

“PAS should sack him for playing Umno’s game,” said DAP’s Senator S. Ramakrishnan (FMT report here). Ramakrishnan accused Nasharudin Mat Isa of having only his body still in PAS whereas his heart already with Umno.

The senator would not have issued such a serious challenge against the PAS Member of Parliament for Bachok, Kelantan without the nod from the DAP top echelon.

Is Ramakrishnan’s accusation that Nasharudin is an Umno Trojan horse believable? Or is it more believable that it is PAS which has changed and Nasharudin who is trying to steer his party back to its founding principles? 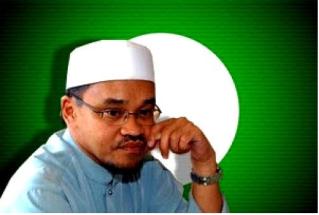 Look at all the leaders whom DAP and their DAPsters have tagged as Trojan horses, among them Tunku Aziz Ibrahim, Hasan Ali and Zaid Ibrahim. None of the three have joined Umno or in the case of Zaid, rejoined.

Zaid, in fact, had scoffed at the allegations saying:

“Unlike Khalid [Samad], I do not aspire to have an office in Putrajaya because I had it before. Only a stupid fellow would think that I can be an Umno agent. No one resigns from a position as Minister just to become an agent.”

Now a nobody in PAS

Nasharudin bukan calang-calang orang. He was PAS deputy president between 2005 and 2011.

Yet Karpal could say that Nasharudin has now become only a “small fry” in PAS whose views do not reflect that of his party — see mStar report. And the Pakatan supporters have not only been saying really nasty things about Ustaz Nasha but they’ve also been ridiculing him in their usual DAPster fashion.

Nasharudin’s reply to critics upon being met by reporters on arrival at KLIA on his return recently from Mecca:

To the accusation that he will be party hopping, Nasharudin responded:

Ustaz Nasha has had to fend off similar conspiracy theory charges once before, for standing by Hasan Ali when the latter was sacked by PAS in December. In that last round, Nasharudin said in a Berita Minggu interview on 18 Dec 2011, “Kepercayaan dan kesetiaan saya kukuh terhadap PAS.”

He has carried himself with a quiet dignity though it all and there are those among his party grassroots who see Ustaz Nasha as being victimized by the political machinations of the DAP-PAS kahwin mutaah.

And now DAP is asking PAS to sack its former deputy president! Has Umno ever interfered in MCA affairs so publicly?

In the Hasan Ali episode, one can see that PAS has succumbed to DAP’s Jom Ubah Syndrome whereby it is the party itself that has changed post-March 2008 after newly tasting unprecedented power.

DAP, a so-called socialist party, has morphed into fat cats just like MCA.

And PAS has been copycatting DAP’s pretzel twists in jettisoning their purported party ideology.

Was Hasan Ali, who was sacked for – among other reasons – his opposition to the DUMC-related developments, correct in his concern that the Christians have been actively proselytizing?

Subang Jaya is the hotbed of Christian evangelism and this is increasingly visible ever since Pakatan took over.

DAP Subang Jaya state assemblyman Hannah Yeoh used her DUN allocation to provide a donation to a City Harvest Church Subang Jaya programme. As we know, its sister church in Singapore has been charged in court for massive fraud.

The Damansara Utama Methodist Church had been illegally operating at Dream Centre where raid by Jais took place.

Its building was approved for use only as a community hall and not for church activities. The church stands on land gazetted for industrial use and not for religious purposes — see FMT report. 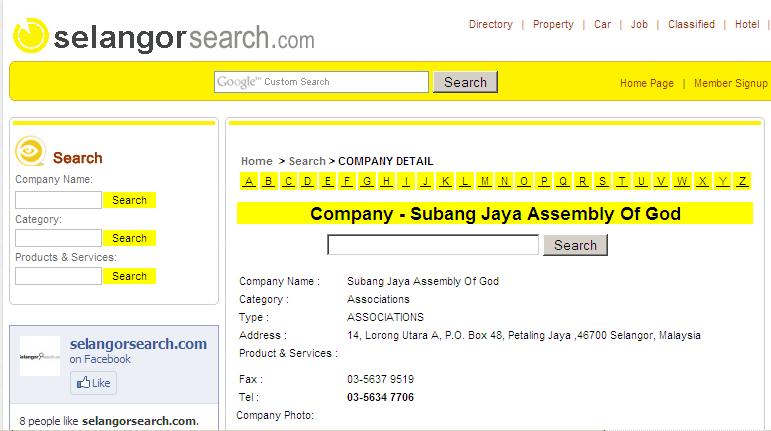 On 12 May 2011, Hannah Yeoh donated RM2,500 from her DUN allocation to the Subang Jaya Assembly of God. This ‘church’ turns up in Internet searches as a company (see screenshot above).

Evangelical Free Church Gospel Centre also appears to be a ‘business’. It turns up in a classifieds registry online search under the ‘Company’ tab. 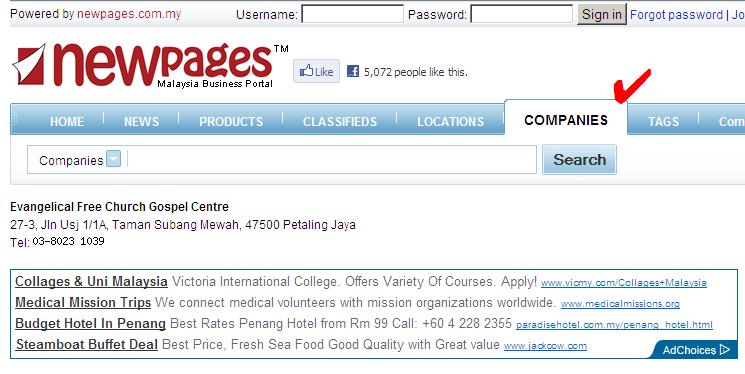 The same amount of RM5,000 was given to Evangelical Free Church Gospel Centre for the same Subang Jaya Pastors Fellowship in 2010.

This Evangelical Free Church Gospel Centre, to which Hannah Yeoh channeled RM10,000 in total, shows up in the business search online as providing “professional services” and not religious services (see screenshot below). 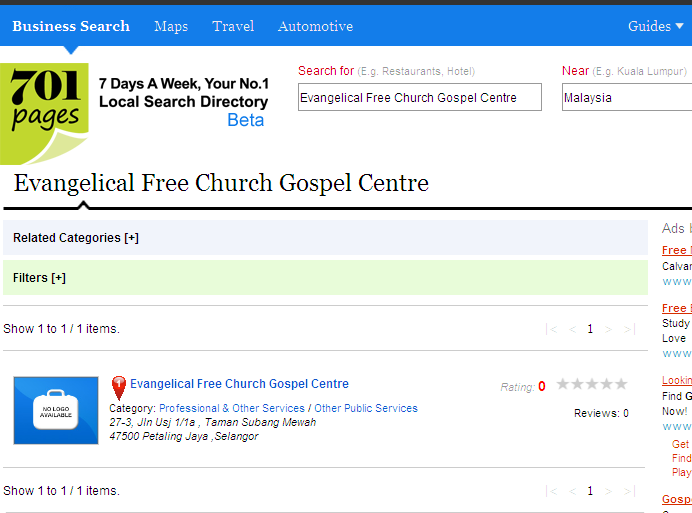 Furthermore, Hannah Yeoh has been funding the Subang Rally, yet another Christian Fellowship programme targetted at youths. She provided the Subang Rally (held on 9 July 2011) with RM3,000.

She also gave RM5,000 of her DUN budget to the 2010 Subang Rally themed ‘Ignite’ (see logo connection) and RM2,000 to an earlier edition of Subang Rally held in July 2009 (see screenshot of their rallying cry “Rise up it’s time to take Subang for Jesus!!!”). 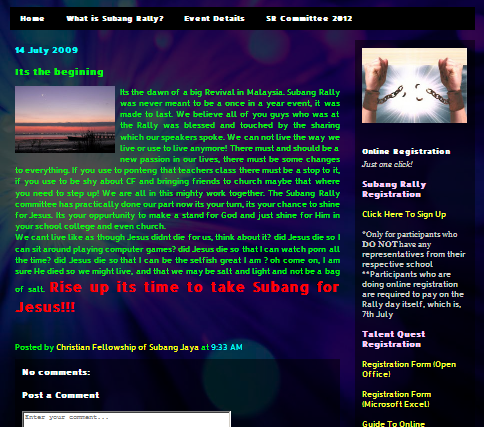 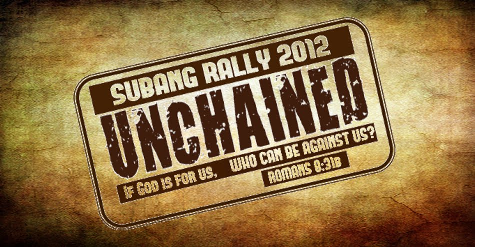 While the mainline churches are better regulated, evangelical outfits do not come under a central controlling body, like say for example, the Catholic Church which has an ordered hierarchical structure.

Evangelical churches on the other hand are new entities. The City Harvest Church in Subang Jaya is only about 10 years old.

Aside from political activism (see Subang Rally-Unchained logo above), what is one to make of youngsters performing a group prayer for politicians, like in the photo below where the kids are “laying [their] hands towards Hannah Yeoh” — according to the caption in the website http://subangrally.blogspot.com

Imagine the uproar if schoolchildren were made to do a group prayer thanking Allah for His anugerah of Najib to represent Pekan for the Muslims.

And what is one to make of the news that “20 people accepted Christ in the first session” of the Subang Rally? The participants were all young people and we cannot be sure if they are of the age of majority. 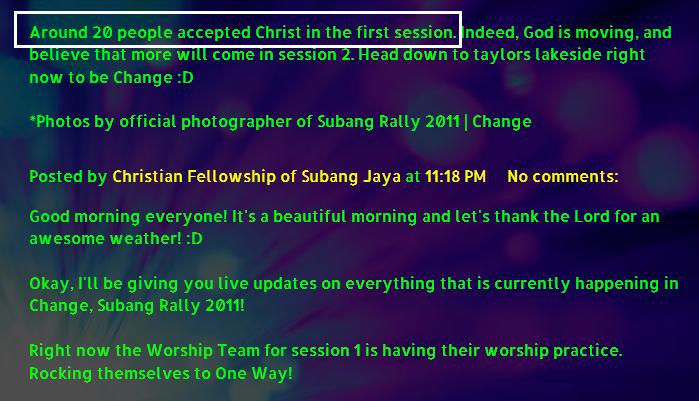 Hasan Ali has insisted that the evangelists are proselytizing among Malay-Muslims.

There appears to have been a cover-up and one year down the road, we’re none the wiser on the dodgy DUMC details.

Today we have the DAP asking their ally to sack Ustaz Nasha, the only top PAS leader to openly back Hasan Ali when the knives were out.

Are we to take it that in Pakatan, the PAS people will kowtow to the DAP evangelism stream because it is the stronger current and more influential?

Will Kelantan and Kedah be using the Pakatan Merdeka logo of the dove?

37 thoughts on “Ustaz Nasha, Hasan Ali right to be concerned”