What does sebangsa mean for DAP, you think?

The chart below is the results of a national opinion poll conducted by the Merdeka Center from 24 May to 7 June, 2006.

The survey findings were resurrected by Raja Petra Kamarudin and reported in FMT yesterday.

It shows the Chinese are Race First while the Malays are clear and away Muslim First.

The Indians are truly the most patriotic. Yet ironically, their community is the one most beset by the problem of statelessness and lack of proper documentation, i.e. not possessing birth certificate, MyKad and citizenship papers.

The percentages for the three major ethnicities featured in the bar chart above do not tally 100 percent as there were other combination answers: 5% with reference to Malay respondents, 4% to Chinese and 6% to Indian.

The Merdeka Center did a fairly comprehensive opinion poll across a spectrum of Malaysian attitudes. Its 87-page report can be viewed in pdf here.

The survey was funded by the Asia Foundation, whose summary report can be read here.

Raja Petra’s abstract can be read in his Malaysia Today column (excerpts below):

The consensus is that the survey indicated sharp differences of views on religion and national identity among the Malays, Chinese and Indians.

The Merdeka Center findings realistically reflect the attitudes of the three communities on race and religion.

Firsters who must invariably attack any mention of this reality are either in denial or deliberately wish to mislead the opposition-supporting public.

Granted that the poll was taken six years ago and attitudes may have shifted somewhat.

Therefore the DAP evangelist politicians who are not objecting to hudud today on account of political expediency, and who hypocritically don Muslim garb, are not representative of the larger Chinese population.

Nonetheless, they appear to have swayed some Anglophile Chinese towards accepting the installation of hudud for the sake of Pakatan politics.

This is an important point to note because it is inaccurate to describe the DAP new wave fundamentalist politicians as “Chinese chauvinist’. They’re not Chinese creatures but political animals — chameleons.

What did Tunku Abdul Rahman believe?

He was also the father of the Alliance — a coalition of three race-based parties, i.e. Umno, MCA and MIC. (The BN was created by Tun Abdul Razak Hussein in June 1974.)

Therefore, Tunku most certainly practised communal politics which reflected the on-the-ground situation of his time. Remember all the racial classes between Bintang Tiga and Malays after the Japanese WWII surrender as well as the race riots in Singapore and Penang which occurred in the 1950s and 1960s predating May 13.

Datuk Onn Jaafar had wanted to open Umno to the other races and make it the United Malayan National Organization. His idea was rejected and thus he had to leave the party. Some of Datuk Onn’s loyalists followed him out of Umno.

Tunku did not leave the party along with Datuk Onn and the other Malay leaders. Tunku stayed on in Umno, the Malay party.

This means that Tunku did not agree with Datuk Onn that Umno should be turned into a multi-racial entity. He agreed for the status quo to be maintained.

What is SABM smoking?

Haris believes that “national unity” had been the vision of Tunku Abdul Rahman. Haris speaks glowingly about ‘The legacy and inspiration left to us by Tunku‘ as the foundation for building SABM.

Aside from Tun Hussein Onn, Haris does not believe that any of the other Malaysian premiers, past and present, shared the same vision of national unity.

Haris had previously criticized Najib Razak for being clueless about “the Bangsa Malaysia soul” – keyword ‘jiwa’ as with the Pakatan Merdeka Day slogan – when he blogged his series of postings (linked below):

Haris believes that to achieve Bangsa Malaysia, “You don’t have to have a common language, if you have the same jiwa (heart, spirit, passion, devotion)” — see Part 2.

Haris says Najib’s 1Malaysia will fail because it has “no concrete ideas … about how to go about changing hearts and minds so that Malaysians see each other as just Malaysian and not Malay, Chinese, Indian, etc.”

“The jiwa of the man behind Vision 2020 [Mahathir Mohamad] was not in sync with that of the ordinary Malaysians who struggle to make ends meet,” Haris had written in Part 2 also.

Haris asks his readers: “Are you getting a sense of the jiwa of the man [Najib Razak] who now proposes to unite us all as a nation of a single people?” — see final part.

Haris further scoffs at how Najib “would have us believe that his 1Malaysia is the roadmap to the Bangsa Malaysia that Mahathir spoke of [in his Vision 2020 blueprint]”.

Instead Haris gives his own explanation of the ideal Anak Malaysia individual in his posting, ‘The mind and heart of anak Bangsa Malaysia‘.

Haris extolled Hannah Yeoh as “excellent candidate material” and the perfect ‘Beyond Race’ leader to help the country achieve his vision of Bangsa Malaysia. 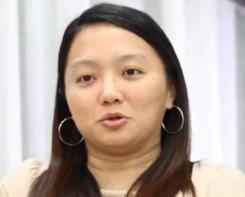 “In a bid to reject racial politics, a state assemblyperson attempted to register her daughter’s race as ‘Anak Malaysia’ but was told by national registration officers that the current system does not allow this.

“The parents went to the National Registration Department headquarters in Putrajaya today to register Shay for her birth certificate.

“We were given a form to fill up. So we put ‘anak Malaysia‘ in the column for ‘race’, but we were told by the officer that her race must be defined according to the parents’ race, which is Chinese or Indian,” Yeoh (right) told Malaysiakini when contacted today.

‘”We replied that my daughter is not Chinese or Indian’.”

.
DAP’s Malaysian First is almost indistinguishable from SABM whereas the SABM firmament is orbited by Firster stars.

SABM have marketed Tunku Abdul Rahman as the mascot for their colour blind and “beyond race” branding.

Tunku was father of the Alliance. Umno and MCA had allied with each other – much like the Pakatan 2008 electoral pact – to contest the 1952 Kuala Lumpur municipal election.

Tunku’s Perikatan beat Datuk Onn’s Independence of Malaya, a multi-racial party. Umno-MCA won 51 seats out of 52. IMP did not win any. Even Datuk Onn himself failed to secure a seat in his native Johor Baru.

MIC joined the Alliance in 1955. Not only was Tunku responsible for the communal party formula but the framework itself was entrenched under his stewardship.

If Tunku had believed in a non-race based political approach, he would have departed from Umno together with Datuk Onn. That he didn’t meant that Tunku rejected the idea of the multi-racial party as a vehicle for national unity but preferred the Alliance consociational model instead.

Therefore, isn’t it bizarre that Haris Ibrahim and his SABM could conscript the late Bapa Parti Perikatan to become a poster boy for their Jom Ubah new politics?

46 thoughts on “Something for PAS to think about”