Many opposition supporters in their comments online are still not acknowledging that the act of stomping on the prime minister’s photo on the eve of National Day is kurang ajar.

Malaysians tend to take for granted the peace and stability we have, with seemingly little realization as to how uncommon and possibly fragile our country is.

They appear unaware that almost two-thirds of the world’s Muslim-majority countries are mono-religious with 90 percent and above of their populations adhering to Islam.

In more than half of these countries, 95 percent and above of the population are Muslim. In all of these countries, I doubt that the Muslim majority will take lightly an aggressive Christian minority poaching ‘Allah’ as how the acrimonious developments have unfolded here.

Muslim countries around the world do not as a rule play host to religious minorities. Not even secular Turkey. It may surprise you to learn that Turkey, which once aspired to be in the European Union, is 98.6 percent Muslim.

A sizeable minority in any Muslim country is just as rarely to be found co-existing without ethnic and religious strife. The fact that in multi-racial Malaysia violence has been kept at bay is due to the successful balancing act where the majority and minority communities have walked a tightrope without falling off for the last 40 odd years.

Compare even the Westernized Turkey.

We Malaysians probably can’t tell a Kurd apart from a Turk (just like an orang putih might not be able to distinguish a Korean from a Japanese) but nonetheless Turkey’s minority Kurds feel themselves to be a distinct ethnic group.

Quite obviously to the Kurds – who form 20 percent of the Turkish population – race matters even though they are of the same religion, Islam, as the Turk majority. Kurdish insurgents have long been fighting a separatist war for autonomy and to create their own national homeland, Kurdistan.

Three other discernible minority ethnic groups in Turkey are Armenians, Jews and Greeks.

(a) It is estimated that one and a half million Armenians perished between 1915 and 1923 in the Armenian Genocide that took place in Turkey — see FAQ here.

(b) The history of the Jewish minority in Turkey and the rest of modern Europe has been well documented (see table below).

“Up to the last years of the Ottoman Empire, they [Greeks] still numbered nearly two million, dominating much of the commerce. But after the violent birth of the Turkish republic in 1923, most of those living along the Aegean and Mediterranean coasts were expelled in a matter of days through an agreed population exchange with Greece.
.

The sizeable community in Istanbul, though, was exempted, and until the mid-1950s there were still nearly 70,000. But nationalist emotions stirred up by the crisis in Cyprus were directed against the Greeks in one night of horrific violence in September 1955, in which mobs attacked shops and churches, raping Greek women and forcibly circumcising priests. Hostility towards the Turkish Greeks continued for many years, forcing thousands to leave Istanbul.”

.
In the 1955 Turkish riots (cited in passage above), “38 churches were burned down and 35 more churches vandalized” — source here.

The two million orthodox Christians of Greek descent who lived in Turkey before the formation of Kemal Ataturk’s republic have today dwindled to such a small number that Turkish churches presently do not have enough congregants to fill the front pews.

Malaysia between Lebanon and Sudan 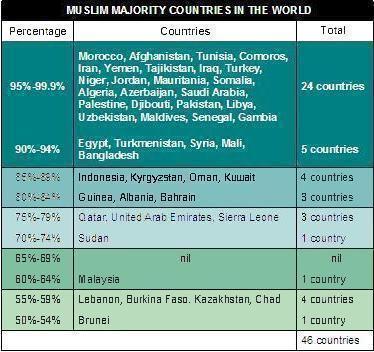 The table (above) on countries and their percentage of Muslim population is compiled from 2008 data estimates by the Pew Research Center.

What the statistics tell us is that Malaysia is an outlier. In fact, Malaysia is all alone in its 60-64 percent Muslim majority band.

Our country, by Muslim demography, is sandwiched between Lebanon and Sudan. If you have never heard about the long-drawn civil wars in both countries, click here for a thumbnail sketch.

Malays are by and large moderate and tolerant, and hence Malaysia has not seen the sectarian armed conflict between Christians and Muslims that occurs elsewhere, even in our nearest neighbours.

In Indonesia’s religious hotspots – Ambon, the Maluku islands, Aceh – Muslims and Christians are hacking at each other with sharpened parang.

Timur Leste became an independent republic after concluding a war between its Christians and the Indonesian Muslim colonizers.

In Thailand’s rebellious southern provinces bordering Malaysia, the ethnic Malay-Muslim Thai population are carrying out an insurgency. In Mindanao and the south Philippine islands, Moro Muslims – formerly under the rule of the Sultan of Sulu – have staged a series revolts and uprisings against Christian Manila.

The Twits – meter reading today 50,713 – are swayed by their DAP evangelical leaders who thump the pulpit:

“May God have mercy on the racists for they love not others who are also made in God’s image.”

DAP Christians who preach “Racists must be taught how to love” must explain their definition of ‘racist’. Better yet, DAPster missionaries should volunteer to go to the aforementioned neighbouring countries to more usefully preach their Beyond Race and Religion ideology over there.

So far, Malaysia has not turned into a deadly conflict zone because as I’ve pointed out a few paragraphs earlier, Malays are by and large tolerant and moderate. Because they are essentially Malay by nature, one might pujuk his fellow Malay “Rileks le bro” in the face of taunts that his race is “racist”.

Malaysia has also not had major religious flare-ups for the other reason that the biggest minority, the Chinese, are Buddhists. Unlike the Christians, Buddhists do not lug around the millennia-old baggage of crusader campaigns (perang jihad, seen from the other side).

With Buddhists, provocation is minimized as you will not find a publisher of the sutra (scriptures) desiring to call God ‘Allah’. And there has never been any whisper of the threat of ‘Buddhisization’ to Malays.

However Buddhism among Chinese youth in Malaysian is on the wane whereas the evangelical Christians in the political arena have become loud and vocal. Hence it is only to be expected that the delicate equilibrium we have managed to maintain thus far in race relations is now disturbed.

91 thoughts on “Christian-Muslim axis of conflict”