Bernama today pooh-poohed the allegation raised by DAP Senator S. Ramakrishnan that a photograph of the PM’s Raya open house in Putrajaya was doctored.

In his response today, Yong stated:

“Time is of the essence for a professional and responsible news organisation like Bernama and we do not have the time to indulge in irrational endeavours.”

If time is of such great essence, Bernama sure ain’t showing that the organization places any value on urgency. After all, Ramakrishnan raised the matter on Aug 27. Today is Sept 5. Does it take 10 days for Bernama to issue a simple outright denial?

Nor does Bernama explain why the photo is captioned “Only for usage within pmo.gov.my domain” (Prime Minister’s Office) but inadvertently used on the front pages of the newspapers.

You can read the Bernama response in full at their website, here.

While I do not agree with the DAP Senator’s narrow interpretation that the festive scene should necessarily have depicted visitors who are “the young, old and the disabled in wheelchairs”, nonetheless, Yong’s statement – other than asserting Bernama’s professionalism – did not provide any technical explanation as to why some quarters view the said picture as Photoshopped.

See below: I’ve white-boxed three sections of the crowd that bears closer scrutiny. Please match and compare these segments against the main photo for context.

Box 1: Why do the people beside and immediately behind the child in orange – hoisted on (probably) his father’s shoulder – appear disproportionate (bigger than) the rest of the people around them?

Box 2: Why is the bespectacled young woman so much bigger than the Pak Haji wearing kopiah behind her?

Box 3: There is a man holding up his camera phone and beside him on his left three women in tudung also holding up cameras. They are half a body length taller than the people behind and in front of them.

Their posture does not indicate that they’re balancing themselves on a raised platform. Plus it’s out of character for middle-aged Malay ladies in baju kurung to be standing on chairs in such a packed crowd.

Bernama’s defence merely rests on the claim that they are a responsible outfit and would not “indulge in irrational endeavours”. To me, the excuse is not persuasive enough.

Firstly, it can hardly be said to be “irrational” to pad up a crowd size if it serves a purpose. Unethical yes but irrational no.

Secondly, The Star (which published the Bernama photo on its front page) has just been caught out for plagiarism. A black mark against their self-professed professional standards. 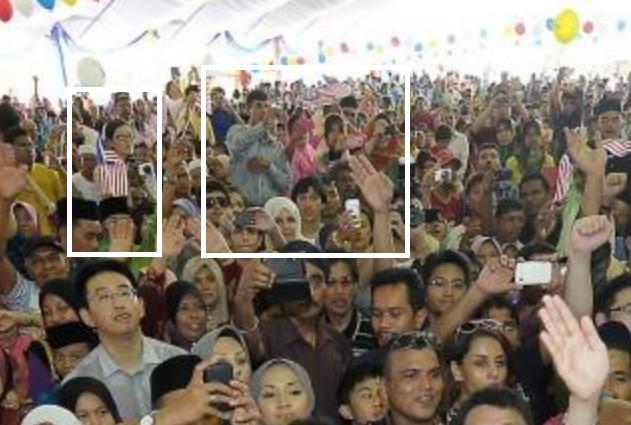