The man with the silver hair (in striped shirt) in the photo below is a 62-year-old teacher. 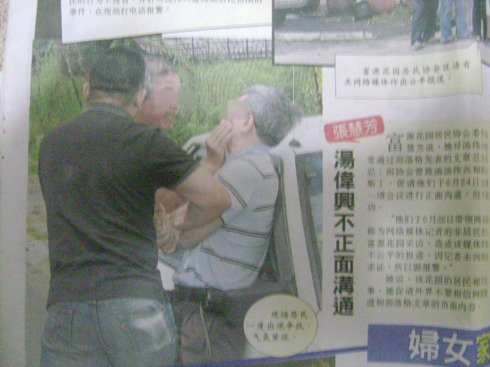 Below is another photo. The senior citizen Simon Thong is in his car in Taman Kaya, Ipoh.

The Star reporter is correct to say it’s “simply ugly on your part if you intimidate your neighbour or neighbours in the open or in cyberspace”.

However her article was given the incongruous headline ‘Verbal clash‘. When an elderly person is manhandled as we can all see from the photos, the episode is certainly more than just a “verbal clash”.

What can be wrong with a newspaper that fails to accurately report something so obvious? 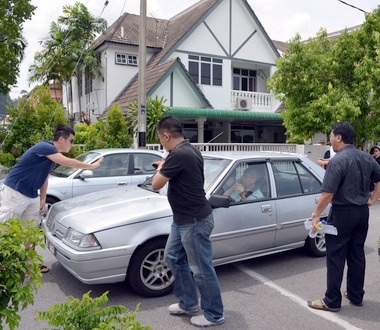 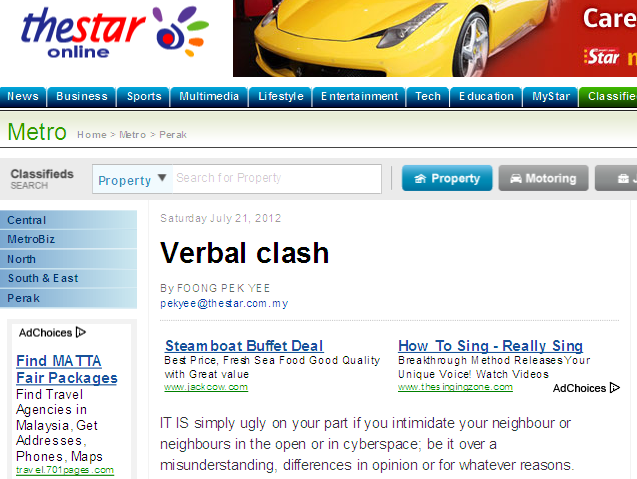 Simon drew the ire of some the hooligans with regard to his neighbourhood gated community project.

The fact of the matter is, Taman Kaya has NOT been designated a gated community according to the Housing and Local Government Ministry’s Gated Community and Guarded Neighbourhood 2010 guidelines.

Therefore it is wrong for the Taman Kaya residents to take it upon themselves to block the public from entering their housing estate because the roads are public property which other drivers are entitled to use.

But guess what? Look at another Star article headline that labelled someone who doesn’t pay a “freeloader“.

Just because the individual refused to contribute to the monthly maintenance fee for the hire of private security guards manning the guardhouse and boom gates — which are illegally erected.

There is truly something wrong with The Star and its cavalier approach that blames the victim instead of the bullies.

There’s more to the story but you won’t read it in The Star (which is The Rocket in disguise).

You can read it in online portal Media Perak in an article titled ‘Samseng DAP Taman Kaya (1) video’.

The photos below are taken from Media Perak. Look at the man circled who’s reportedly a DAP branch chairman.

And look who the Man in Black is photographed standing beside in the ribbon-cutting ceremony (below). Surprise, surprise …  it’s the DAP Taiping Parliamentarian-cum-Pantai Remis Adun — evangelist David Nga Kor Ming.

According to Simon Thong, another conscientious objector Augustine Anthony had already moved to a rented home to avoid being harassed.

Simon also says in his blog posting that his neighbours involved in the fracas are “so-called good Christians” but he won’t be naming their church.

After his harrowing experience, Simon now swears, “‘Anything But DAP! Especially in Perak!”

The Star coverage of the entire affair has many gaping holes and fails to tell you the back story concerning the DAP personalities involved.

It’s as one-sided in its approach as earlier when the paper showed its middle finger to Chua Soi Lek and son.

Going into the general election, BN should be alert to the risk that there is really something wrong with The Star, and to beware.

And it’s not only in The Star‘s almost mandatory sugar-coating of the Subang Jaya Adun every 48 hours in its pages (screenshot above) but also its reporting on happenings elsewhere insofar as DAP evangelists come into the picture.