“From now on, it’s a Malay vs Malay contest”. Think about the sentence and reflect deeper on what is behind this DAP desire.

Penang DAP chief Chow Kon Yeow, in his speech on Dec 2 at the party’s annual state convention, reassured Malays that they would remain in power even should Pakatan succeed in taking Putrajaya.

“From now on, it’s a Malay vs Malay contest” rang the headline of a Dec 5 article by Ooi Kee Beng, whose words carry echoes of the evangelist Penang DAP chief.

Dr Ooi, a Penang born-and-bred academic, is author of a biographical sketch of Lim Kit Siang. The book is sold in the bookshops with a bonus DVD on ‘Life and Times of Lim Kit Siang’. It is published by Refsa, a DAP-linked organization.

“Does not encourage racial or religious politics” (SAYS WHO?)

“One Malay leader is pitted against another Malay leader, and each is backed by an assortment of non-Malays,” writes Ooi, the deputy director of Singapore’s Institute of Southeast Asian Studies, in describing the political situation today.

“Such a situation, strangely enough, does not encourage racial or religious politics,” he adds in Today, the second most popular Singaporean newspaper.

Underscoring his New Politics thesis where “we are witnessing a Malay-Malay battle”, Ooi asserts:

“From now on, it’s a Malay vs Malay contest” (OH REALLY?)

Let’s examine the article ‘From now on, it’s a Malay vs Malay contest‘ more closely. Ooi claims, “… does not encourage racial or religious politics”. His diagnosis is debatable. Ask yourself, has race politics in fact decreased or increased since 2008?

Ooi also emphasized the “dramatic changes that have been taking place in Malaysian politics” and how “Opposition forces within the Malay community have come of age”.

Referring to the newly acquired political confidence of the Malay community, Ooi declares: “Its questioning … the limitations of communal politicking – is an expression of that very maturity”.

The so called “Malay-Malay battles” taking place today are nothing new. After all, Tengku Razaleigh Hamzah and his Semangat 46 mounted a credible challenge to Mahathir Mohamad some two decades ago.

Earlier, the 1959 general election saw a Malay against Malay showdown too. In that staggered polls, which was the first federal election conducted in Malaya, PAS had won Kelantan and Terengganu. 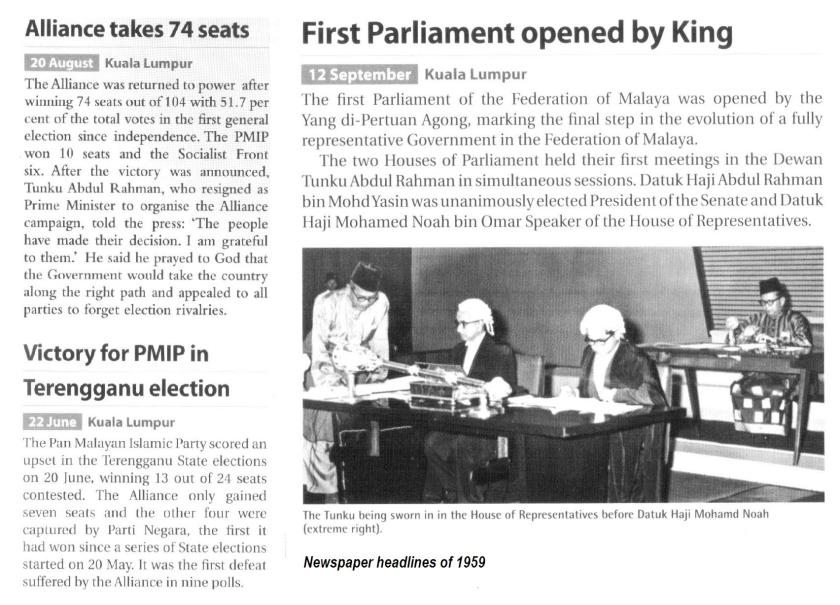 In the Terengganu election held four days later, PAS won 13 seats to Umno’s 7. It was also in this debut general election that Onn Jaafar won the Kuala Terengganu South Parliamentary seat and his Parti Negara picked up the remaining 4 seats in the Terengganu legislature.

History professor Cheah Boon Kheng writes in his book The Making of a Nation that “Clearly, the backward eastern states of Kelantan and Terengganu did not support the Alliance’s ‘pluralism’ policy and its too generous citizenship terms to the non-Malays’.”

“The 1959 elections showed that the PMIP’s appeals for a ‘Melayu’ nationality, a theocratic state based on the tenets of the Hadith and the Quran, and their resentment at the Alliance Governments inability to solve Malay rural economic backwardness had reflected the true feelings of large numbers of rural Malays.”

(PMIP is the Pan-Malayan Islamic Party, the old acronym for PAS.)

In the 1959 general election, the Alliance won only 51.5 percent* of the popular votes. That’s just half the support of the electorate.

Meanwhile PAS alone garnered a strong 21.2 percent of the popular vote. There was no DAP as yet that time.

The PPP under the Seenivasagam brothers won 8 state seats in Perak, with 4 of those seats being the contiguous constituencies around Ipoh. The Socialist Front won a total of 16 state seats in the Chinese and Indian-majority areas of Penang, Selangor, Negri Sembilan and Johor as well as 8 Parliament seats (5 in Selangor, 3 in Penang).

MCA which won 19 Parliamentary seats performed its best in the Malay-majority constituencies and worst in the New Villages and Chinese urban areas. (We can see how consistent the MCA track record has been.)

Cheah Boon Kheng sums up: “Overall, the 1959 general elections showed a certain political maturity of the electorate and also that democracy worked”.

“There is no racial discontent or friction” (SO YOU SAY)

Ooi Kee Beng is confident that it is the “new issues” that are of paramount concern to the new electorate which include in its ranks the young, city Malays. According to him, these new issues cover “cronyism, corruption, rule of law, the state of the civil service and the electoral system, among others”.

Promises to eradicate “cronyism”, “corruption” and “communal politicking” mentioned by Dr Ooi are part and parcel of the ‘Ubah’ rhetoric.

Let’s put their ideas side by side.

Ooi had written: “One Malay leader is pitted against another Malay leader, and each is backed by an assortment of non-Malays.” Whereas the evangelist politician Jimmy Chua similarly writes: “Pakatan’s Malay leaders are also backed by non-Malay leaders in PKR and DAP. There is no racial discontent or friction.”

Ooi had written: “… the new issues are about wealth distribution and governance, not those of race against race, or religion against religion“. Jimmy Chua writes almost identically: “The next general election is not about race or religion. It is about good governance and justice” [bold emphasis added by this blogger].

Jimmy Chua’s statement can be read in FMT under the article title ‘Don’t fear Umno’s May 13 threat‘.

The Old Chinese electorate voted for stability to keep at bay the ghost of May 13 (cast as “Umno’s threat”).

The New Chinese – who are evangelical – no longer fear May 13 because they believe they have gained the trust of the Malays now that they can step into any surau or mosque on a PAS welcome carpet.