This post continues at ‘Lowyat forumers who live in Subang‘

Someone featured my blog url in the Lowyat chat forum.

Below are their comments (click on pseudonym for their profiles).

suicai99: “For all u know the real person behind that name is a fat, smelly malay dude.” 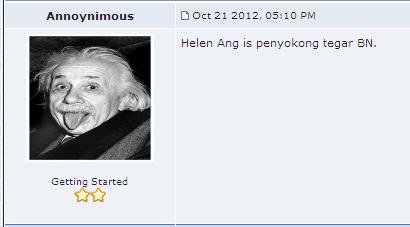 For every action there is an equal and opposite reaction

The other side has had enough of the DAP SuperCyber Bullies terrorizing cyberspace.

Screenshot below is what a Bangsar dudette called Geminianeyes had tweeted to the Kinabatangan MP to make him blow his top.

While I won’t reproduce Bung’s volcanic comeback (but which you can view here), I will say that Geminianeyes had it coming to her.

Now if the DAP SuperCyber Bullies choose to persist, I’m wagering that it’d be sooner rather than later that they get Bung-ed. And it won’t be pleasant.

Not everyone is willing to be as nice as those bespectacled MCA fellas to continually endure Dapster insults. 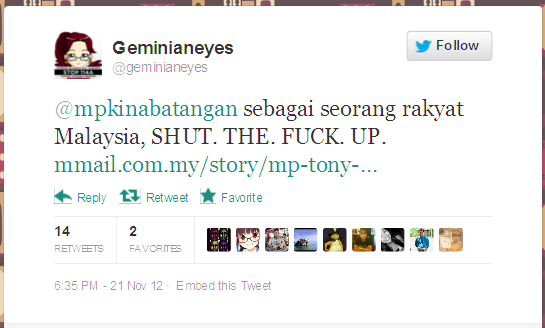 Continues at ‘Lowyat forumers who live in Subang‘