A lot of readers have responded to an article in The Malaysian Insider titled ‘Dr M: Non-Malays too have special rights‘ (14 March 2013). The comments by TMI readers reproduced (copypasted) below:

PandaiTapiBodoh: “For your info, the Chinese, Indians and other races long to have one identity i.e a truly Malaysian identity or Bangsa Malaysia without any discrmination but the people governing this country just do NOT wish to share the same dream. And that includes you.”

victorUN: “[…] Mahathir, I was born and bred in Malaysia and I always want to be identified as a Malaysian.”

Unowiseman: “We are Malaysians not Chinese Malaysian or Indian Malaysian. […]”

cleo2518: “That Tun is an outdated thing. My great grand parents may want to be known as Malaysian Chinese or Malaysian Indian. This is a double edged sword. On one hand it is perceived as preserving our heritage. On the other hand it allows the ruling govt to discriminate against us. The Malaysian born after independence only knows they are Malaysian.”

Laksaman: “[…] Our Chinese and Indian regarded themselves as Malaysian Chinese or Malaysian Indian Unlike our DPM, these Non-Malay put their nationality first before their own racial background.”

These TMI readers were responding to Dr M’s remarks made recently at a University Malaya forum where the ex-premier was quoted to have said, “In other countries there is assimilation but here we are happy with integration. There is even little integration now.”

“Young Guns”: As the first installment of its series on political Young Bloods, Malaysiakini.TV speak to Hannah Yeoh — below, discussing “dealing with civil servants”

Look out for SwitchUp.TV’s interview on Anak Bangsa Malaysia coming up next. (SwitchUp.TV belongs to the Star Media Group).

It is all Umno’s fault

(Note: While I’m not absolving Dr M or Umno from blame, I do not see any of the Firsters ever looking in the mirror. To them, the fault is solely to be laid at the Malay government’s door.)

freemalaysia69: “‘The different races are not coming together.’ Didn’t u ask yourself why? Dr.M the reason is you and your brand of umno baru. only non racial parties can integrate the races in Malaysia”

Olahlah: “Why didn’t you create a Malaysian race? Your discrimination base on race and religion had earned you the Bapa of Racism. […]”

SernLee: “So apparently according to TDM, there is Malay Malaysian, Chinese Malaysian, Indian Malaysian and ‘Lain-lain’ Malaysian. What a joke!”

M4M: “[…] I believe this classifications are deliberate for political purposes. They are there to prevent the nation from uniting as one so that the government can play 1 race against the other. It is racist and should be abolished. Period.”

Are they all Christians at TMI?

freeasian: “We are all Malaysians. It is UMNO that wants to make us all Malay Malaysians, Chinese Malaysians, Indian Malaysians, etc., yet Najib speaks of 1Malaysia when his own parties wants to split that up. Dr M, as usual, is twisting the facts to suit his argument. Most people mellow with age – Dr M becomes more evil with age.”

The TMI reader ‘freeasian’ says that “Dr M becomes more evil with age”. I think he is a Christian. It is in the Christian vocabulary to evoke Good vs Evil, Light vs Darkness, Righteousness, etc, etc

I think the TMI reader who calls himself ‘masterbonker’ (comment reproduced below) is another Christian too as he says ‘Amen’. But he’s an integrated Christian since he calls God as Allah.

masterbonker: “I pray that mahathir will live to be 100 and see all the evil that he had created slowly dismantled and replaced with goodness. May Allah forgive this evil man. Amen.”

The TMI readers want Ubah and the Race policy to be changed. Reproduced below are a few suggestions to abolish the Race box from other TMI commenters:
.
BMWM5: “This idiot [referring to Dr Mahathir] continues to blabber. How many times we have said to exclude race from various forms to start the process of all identifying as Malaysians. Did you facilitate that? Your contribution is engineering further division. Please get lost.”
.
yogan25: Can we all put a Full-Stop to this: Non-Malays & Malays, and Regard all as Malaysians, and Non-Muslims & Muslims, and Give utmost respect to individual religious beliefs by having a give & take policy. Go for change this PRU-13.”
.
waja9073: “[…] We are all born as Malaysian and the first thing that need to be changed is to remove “Race” portion in every forms and registration documents in Malaysia.”
.

Firsters all speak 1English, ya

The commenters also disagree with Dr M’s view that vernacular education in the mother tongue is a privilege.

andyfst: “I wonder which country doesn’t allow to speak mother tongue language and practice their own religion. In Malaysia is a special rights? Such statement made by Mahathir doesn’t make sense at all.”

garyron: “i find his suggestion comical. is he suggesting we all give up our language and all speak english instead”

Who is grammatically correct?

TMI reader ‘garyron’ is under the belief that Dr M has suggested Malaysians give up our native languages and we all “speak English instead”.

Going by the Bangsa Malaysia’s own concept of Malaysian Malaysia – and if we were to all give up our mother tongues – then the argument would be that Malaysians speak the national language (which is not English, just in case ‘garyron’ is unaware).

In our neighbouring countries, the 1Language is Thai in Thailand and Bahasa Indonesia in Indonesia. 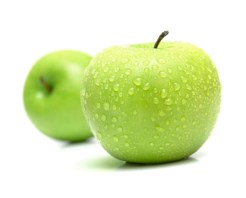 The TMI readers took issue with Dr M for referring to them as “Chinese Malaysian or Indian Malaysian”. They argue instead that they are “Malaysian Chinese or Malaysian Indian”.

They quarreled with Dr M for describing them as Malaysian second (i.e. in employing the term “Chinese Malaysian”, the word Malaysian comes second) because they believe he still does not accept them as true Malaysians.

A quick look at grammar:

(1) “Green apple”.  The main word is apple, and the adjectives ‘green’ or ‘red’ (red apple) additionally describe the fruit.

In English, the important word comes at the back, like in “green apple” where we’re talking mainly about the apple.

Therefore if you want to talk about Malaysian first/mainly, then the important word should be put at the back — Chinese Malaysian.

If you want to talk about Chinese first/mainly, then the ‘C’ word should be at the back — Malaysian Chinese.

Therefore, in terms of English grammar usage, Dr Mahathir was talking about Malaysian(s) whereas the TMI readers were talking about Chinese and Indians.

And yet the Malaysian Firsters scolded him for not being as first/patriotic as them.

29 thoughts on “Firsters picking a fight with Dr M”