Seriously, in my opinion, MCA is scared.

The Chinese in MCA is actually the minority of the Chinese in Malaysia. Well, you can guess who is the majority, right? Look at in any social media, Umno and PR followers are actually quite balanced. Even MIC followers play their parts well to counter.

Then see MCA and DAP. It is like langit dengan bumi!

See that girl being bullied. They can’t even take the heat, and withdrawal the video. If she stands what she believes in, why bother of the insults? Because MCA does nothing to protect their followers. That’s why. It’s like MCA has this identity complex, they don’t have the guts to protect, to motivate.

Like you pointed out before, only old people stays in MCA be it either followers or members. That’s the difference between the old MCA and new MCA.

Are their voices heard? No. Bashing is way too easy than being modest or humble. That’s human nature. If the majority leader is like that, what would you expect of the followers? Leader borek, follower rintik la.

You could see yourself la sis. If the leader of BN is like Anwar, would you see most of the followers at least act like they are now? Do you see any followers of BN answer fitnah with dirty words unless they (PR) start first?

Even Najib jawab fitnah with his performance as a PM. He performs. Anwar? U ulang, I saman!

“Put your balls between your butts”, MCA

By man on da street

MCA being the owner of the Star publications do not expect and assumed that the Malays as a whole would support them, do they? There are Malays being in the oppositions and in the pro governments who speaks fluent Oxford English, thus we the Melayu’s in both sides knows what is MCA up to.

These are the “guntings dalam lipatan” that is propagated by the cowards in MCA. Enjoy the rides while they can, hope that they upheld what their leaders say. If they fail to garner enough confidence in the GE13, they would not want any posts be it in state or parliamentary level. Do not piggyback riding on other races efforts.

Prove your worth MCA and start overhauling the Star managements. It’s not government’s entity. It’s business. Being the owner do something or otherwise I’d say put your balls between your butts. We are not stupid, it’s enough to be used by the other piggy party, but to be used by an ally, that’s too much. You are not an invincible party.

[some spelling and punctuation corrected — Helen]

I just wish to elaborate on the case of the cyber bullying where the Chinese woman in her early 20s (name withheld) was threatened by Facebook user Geoff Kua who commented saying he wanted to “pay mat rempit to gang rape her soon … if I could find out where she is now” as well as at the receiving end of thousands of other threats, insults and profanities.

Her pro-BN video clip which was posted on Facebook on Sunday (March 10) went viral in the DAP social media and hence the campaign of intimidation.

What I want to point out is the delay by The Star which only carried the story online on Friday (March 15).

The harassment against the girl was exposed on Tuesday by Shen Yee Aun in his blog 1sya.com.

I picked up Shen’s alert shortly after on the same day, and from my blog it was tweeted 20 times and Facebooked (163).

I had also observed that if this treatment, i.e. cyberbullied by Dapsters, was the inevitable outcome, then which Chinese woman would be inclined to support the BN? (screenshot below) 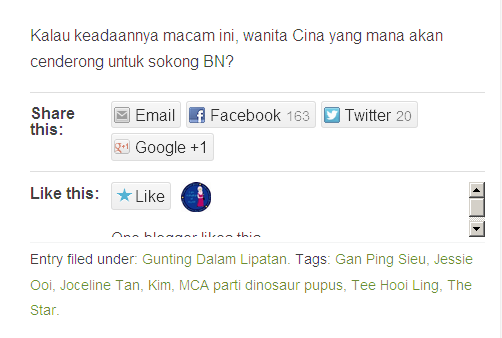 The other thing about The Star‘s ‘tidak apa’ attitude is that the story was only uploaded on Friday afternoon whereas the NST already had it online on Friday morning.

When my reader Rashid alert this blog at 9.39am Friday, the story was not yet up in Star Online.

The Star article, when it eventually came out, gave a hat-tip to Stop the Lies blog which had the story a day earlier on Thursday.

Although Star Online does not time-stamp it stories, a Google search — see below — put its time of upload at roughly 1-2pm on Friday (March 15), compared to NST online’s early morning time-stamp.

This in turn means the DAP SuperCyber Bully story was only read by a limited number of Star Online readers but not made available to the kopitiam and traditional paper readers.

Overall, The Star displayed an extremely lackadaisical attitude to a story that was broken by Shen Yee Aun three days earlier on Tuesday morning. 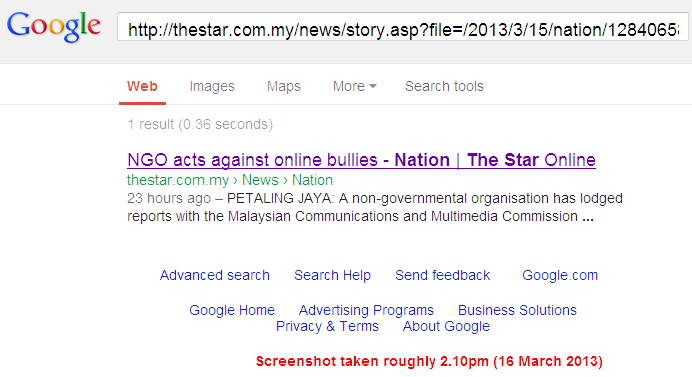