Sooner or later the election will have to be called. But I shall jump the gun and take my blog into election mode now (remember the reformatting I promised?)

Postings will be much shorter but more frequent daily.

I shall hold off putting forward my own views. Instead I’ll aggregate (like how I pinched the two Wee Choo Keong interviews) since we’re into the eve of GE13 and there’s plenty of interesting stuff out there.

We’ll also try to shift into forum style. With more topics on the table, you all have more discussion threads to chose from and can talk to each other. The Conrad-Calvin-grkumar exchange, for example, was highly informative. 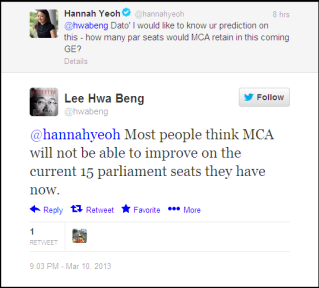 Writing on the wall for MCA as crowd yells “No! No!” to Yen Yen @ Anil Netto’s.

When I asked ‘Will Malays vote MCA in GE13?’, I had said that I’d explore in a subsequent part the several factors causing the MCA to stumble.

But on second thought, there are plenty of Chinese out there (the 85 percent) compiling plenty of hate lists on the MCA. You can read them lah; saves me work. Here’s one in The Malaysian Insider (19 March 2013). 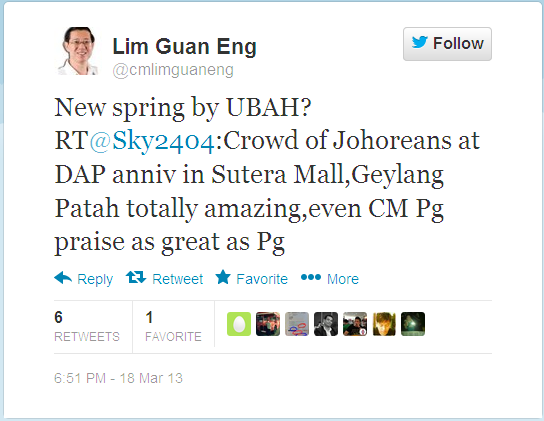 Expect an onslaught from the DAP 2.0 evangelist politicians.

The tweet above is by the DAP leng chai Adun for Canning, Perak.

DAP is wowing the crowds. MCA is not. Recall how rude the diners were who attended the MCA free/subsidized mega dinners. They went to eat and continued eating (or chatting) when the speakers took the stage. Some even walked out when Dr Chua started speaking.

Dear Leader Guan Eng is chest-thumping already (see tweet). So will the DAP tsunami successfully sweep from the north to the south?

The next recommended link, ‘Is Chandra Muzaffar evil when he speaks sense?‘

I got the headline for this posting from the uppercaise blog where Gobind wrote: “Opposition supporters only see that Chandra is again walloping Anwar and Pakatan. (Many don’t read beyond the third paragraph.)”

“Chandra is not the first to observe that changing the people in power does not automatically mean an end to corruption. All through history, people have found the revolution eventually perverted by the very people who rode the wave into power.”

If anyone’s interested, I’ve got this piece ‘The revolution that devoured itself‘ which I posted on 11 Aug 2012.

For those interested in a kinder view of Chandra, please check out Anas Zubedy’s blog.

So okay, please gimme your feedback whether this length, this fast pace and this number of links and topic variety is optimal for you.

If yes, then we’ll adopt this format from now until polling day.

You’re welcome to share your recommended links or to request for forum topics to be put up. For the past ones proposed by readers, click icon in the sidebar (look up, up, up, top right).

Postscript: If you’ve read this far to the very end, you’re not a very promising nor potential material for an opposition follower. They usually don’t read beyond the third paragraph.