Thank you all for participating in ‘One question‘. We should have enjoyable postings like that more often.

Okay, now to provide the answer to the poser: “Is she wearing the same or different dress?”

Since both photos were snapped at public functions, we can verify that they were taken at different times.

Teo Nie Ching was reported in the society pages of The Star (20 Dec 2008) as attending a special performance of Mamma Mia! hosted by the developer SP Setia for VIPs and corporate bigwigs.

This photo with Zairil was on the occasion of Kit Siang’s 70th birthday party on 27 Feb 2011 at the Shah Alam Convention Centre.

“The one in the smaller picture seems lighter in shade, looks shinier and more creased [perhaps of crushed satin] and do not have the two rows of pipings(?) found on the one in the larger picture. she must like the style and the shade.” 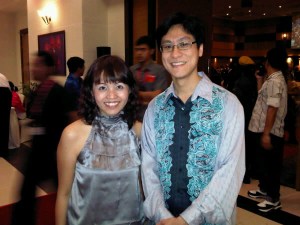 Correct about the horizontal piping thingamajig (women would know about this tailoring feature, the men perhaps not).

And probably correct that the wearer must like the style and the shade. An astute woman is Mekyam.

Another commenter MalayPrincess noted, “totally different dress, above one is like baldu material, below is satin???”

And for a guy, not a bad effort from Fakin’ Fake Calvin: “Different. You can see with the see through material in the second pic what appears to be a design of sorts.”

The “design of sorts” is probably piping as Mekyam has suggested.

And now … for the denouement.

The one (above) with the piping is a greyish blouse which she teamed with a black skirt — a two-piece ensemble.

Whereas the one she wore with the white Hindi movie scarf is a gown, possibly full-length or perhaps calf-length. But whatever it is, you can see that in the photo at the top of the page, the silvery dress is a one-piece.

The photo gallery for Kit Siang’s birthday party can be viewed here.

So the answer is: Different dresses

As to why this posting came up, kita akan sambung cerita esok.

10 thoughts on “About that dress, the answer is …”