Google image search result only showed HY [Hannah Yeoh] wore a Punjabi dress… NO RESULT for SARI… even for Elizabeth Wong, Teresa Kok and Teo Nie Ching. Even if they had wore, the result maybe not in the top 10 pages in Google search.

DAP & evangelistas look down to Indian. Not only through verbal & written messages, but also can be seen from the BODY LANGUAGE.

These evangelistas more willing to be seen in mosques, with Malay Muslim folks rather than be seen inside temples with Hindu Indian.

Why? Because Hindu Indian have nothing to offer to DAP? Who marginalize who?

I wonder if Mr Ram is an Indian or Sikh or Punjabi?

Despite getting married to an Indian guy, HY is reluctant to be associated with the people of * her dear husband. Completely shun away from anything related to India [Indian] ethnicity.

If I were to marry anyone non-Malay, I would have some interest to get to know their culture, customs, food bla bla bla…. and yet she’s a politician. But she doesn’t use this advantage to gather support from poorer segment of Indian in her constituency. I forgot, in Subang Jaya there’s no poor people…. all rich one…

She only represent the so-called EDUCATED HIGH CLASS people.

* “people of his (sic) dear husband” — the pronoun ‘his’ might not be so far-fetched after all, looking at who is wearing the pants in that Anak Malaysia household

Buletin Mutiara in an editorial referred to the mamak as “Melayu celup kopi”. Yap Lee Ying, the director of the Communications Department, Penang state government, had to issue an apology for that slur. 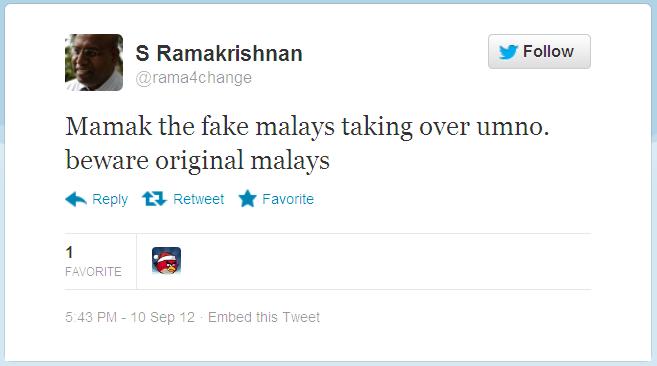 Do you think they mock the Chinese “bin (and binti) Abdullahs”? Is the convert’s new Abdullah name something that Dapsters use as a code word for pouring scorn?

What about any pro-establishment Chinese who goes against the DAP line suddenly being conferred the imaginary status of Muslim convert by these Dapsters?

What about Chinese individuals being given Malay names in a derogatory manner by these Dapsters just because the Chinese concerned are fluent speakers of the national language?

What is the race of Hannah Yeoh’s second-born?

We know that the firstborn was registered as a “Chinese”.

There is unfortunately a stigma attached to being Indian in Malaysia due to the social ills besetting the community, the lack of upward mobility if not the poverty trap.

Isn’t that why we hear the grotesque distortions by the Firsters that Indians are only found in India (which by the same token extends to Chinese only to be found in China). Meaning we’re only Malaysian and nothing else here. 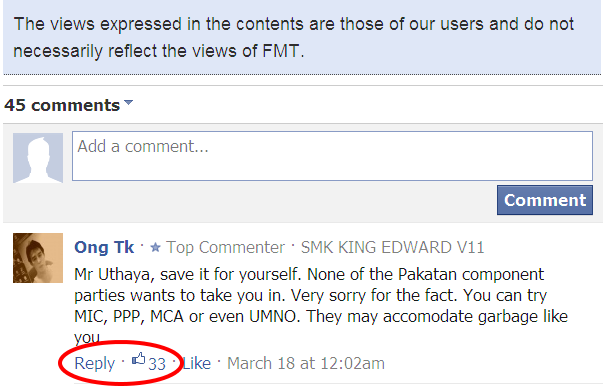 Observe that Ong Tk’s comment calling Uthayakumar “garbage” received 33 Facebook ‘Likes’ whereas Maya Aditya’s rebuke did not get a single thumbs up.

Knowing that Indians are at the receiving end of public bullying, the DAP 2.0 evangelist politicians – not just Hannah alone but the Ngehs and the Ngas and their ilk – rather than using their positions to help improve the image of Indians so that this marginalized community will have greater self-dignity, have instead embarked on the race taunting themselves.

The Anak Bangsa Malaysia-Malaysian Malaysia-Malaysian Firsters tried to “ethnic cleanse” the Indian racial identification. Like sweeping under the carpet. If Indians simply don’t exist in Malaysia, then nobody has to bother about resolving their myriad problems.

The Selangor Times, instead of highlighting Indian politicians who celebrated Deepavali, chose instead to use the evangelical Christian Hannah Yeoh as their festival personality. None of the Indian Hindu reps were featured celebrating.

Postscript: Hannah Yeoh is not wearing sari in either of the Deepavali photos above either.

Role of The Jerusubang Star

Do we see “real” Indian faces in the pages of the paper in many positive contexts?

Even their associate editor going by the name M. Veera Pandiyan insists that ‘races’ have never existed.

Yeah, the Indians do get featured in The Jerusubang Star but mostly as mugshots of criminal suspects shot dead by police or mysteriously dying under police custody.

Needless to say, The Jerusubang Star‘s kiblat is no secret.

17 thoughts on ““Evangelistas look down on Indians” / On mamak and mualaf too?”