The bar chart below shows the ethnic breakdown of the electorate in the 12 states of the peninsula.

Voter statistics sourced from http://www.pru13.org/pdf/statistik_umum (via the Malay Mail infographics) and the population statistics from http://www.statistics.gov.my/portal/download_Population/files/census2010/Taburan_Penduduk_dan_Ciri-ciri_Asas_Demografi.pdf.

.
The size of Chinese voters in each state is represented by the red segment of the bar and its percentage boxed with the red dot marker.

The percentage of Chinese as a part of the state population is noted in white lettering within the red bar.

e.g. Registered voters in Penang comprise 53.38 percent Chinese although the Chinese population in the state is 45.6 percent.

In eight of the peninsular states, the ratio of Chinese voters to Chinese population is unevenly matched with the Chinese voter registration being disproportionately high.

The numbers are reverse in the four most Malay-dominant (76-96 percent) states of Kedah, Perlis, Kelantan and Terengganu where their Chinese residents are under-registered as voters.

Penang, the Federal Territory and Johor are the three states with the most Chinese inhabitants percentage-wise among all the Chinese in Malaysia.

The rate of voter registration among Chinese is overall higher than their population ratio. Turnout of Chinese tomorrow is expected to follow the same trend of bettering the other ethnicities.

Implication: In this respect, the electoral strength of the Chinese is stronger than their actual population numbers.

However this advantage is mitigated by the favourable weightage given rural areas as well as malapportionment, e.g. Kapar has 144,369 voters compared to Putrajaya’s 15,798 voters.

Over the next five years, however, the imbalance that we see in the bar chart above will be certainly be remedied. Umno will make sure of that.

And if the BN wins a two-thirds majority, they can redraw the constituency boundaries.

However it is recommended that they leave the DAP strongholds as they are.

By the time GE14 comes around, the electorate in Subang Jaya would have probably inflated to 250,000 due to the phenomenon of frenzied religious pilgrimage following many more sightings of Mother Mary on the window, the discovery of the Shroud of Subang Jaya and the appearance of stigmata on the Yeopie faithful.

DAP pollies willing to do anything 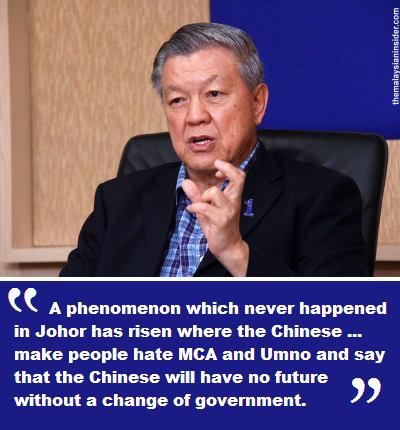 Ghani Othman contesting in a Chinese-majority area against Lim Kit Siang is a watershed.

The usual pattern is Umno versus PAS, and secondarily Umno vs PKR (or previously the defunct S46 and other Malay parties).

While Umno versus DAP in Gelang Patah may not be a historical first, it is nonetheless rare in our 58 years of federal elections (counting from 1955). It will however be more common in GE14 because MCA has proven itself incapable of fending off the DAP onslaught.

Yes it does. So much so that the hated MCA is backstabbed by its own media — The Star.

Dr Chua knows well that his sex video was a havoc created by insiders. The MCA biting the dust is due in large part to the sabotage by The Star in various ways.

Note that the photograph I’ve used for the CSL poster above is credited to The Malaysian Insider.  The top 20 Google image search results on “Chua Soi Lek” turn up photos in the TMI website, in Kuala Lumpur Post, FMT, TNG, Malay Mail, Malaysia Chronicle, the MCA website and a couple of blogs. And there is also a photo of Dr Chua as a young medical student in the website of his alma mater, Universiti Malaya.

However, The Star Online does not make the top 20 Google search on CSL images. The Star Online claims 40-plus million page views and the Star Media Group has a reach to a 5.63-million audience. But it has never featured online any noteworthy photograph of CSL.

Why doesn’t the MCA-owned-and-controlled paper The Star tell us what religion Mr and Mrs Lim Guan Eng belong to since the missus Betty Chew is misuing a temple for her political ‘head-shaving’ gimmick.

And while they’re at it, why don’t The Star do a sidebar on the DAP evangelist chameleon politicians who defy the Selangor Islamic authorities by their incessant politicking in the mosques?

The DAP has even gone to the extent of trotting out Teoh Beng Hock’s ‘widow’ to fish sympathy votes in Johor.

And guess what? The Star had previously reported that the government blamed Beng Hock’s “own negligence” as the cause of his death. None of the other mainstream media carried the story which was a Star scoop (or poisoned scissors stab, more like).

If Chua Soi Lek is worried about Ubah politics inciting hate, then pray tell what of his party-controlled newspaper telling its millions-strong audience that the government had lain the blame for Beng Hock’s death on the young man’s own negligence?

This ‘Blame Beng Hock himself’ story is just one of the many, many sly sabotage stories that The Star has carried which none of the other media did.

But when other media went to town with hot stories like Guan Eng’s Christmas eve message on the kalimah Allah and Patrick Teoh’s comment on “Quran-thumping mother****ers” as well as revealed Patrick’s close ties to the DAP, The Star kept a deliberate deathly silence.

MCA ni bodoh sepat ke bodoh sombong to have let all of this go on right under their nose?