The Star ought to change its logo to rocket. As a paper owned by a BN party which rely on Malay votes, its sympathy to Dap is nauseating.

If I were Umno, I’d NEUTRALIZE the Sneaky Star.

His paper flashed it as a breaking news report.

In fact, The Star is so excited that they made a spelling mistake (see screenshot taken 12.05pm).

See what happens when you get taken in by the Pakatan pacifier.

However within a single term and with all the state resources behind them, they have managed to snare 90 percent of the Chinese vote. What kind of check-and-balance is left when the ratio has become 10:90?

And do not forget that Lim Guan Eng even aspired for “zero opposition” in his state and asking Penangites to let the state opposition, i.e. BN “eat duck’s egg” (translated from Hokkien).

The Dapsters are always reassuring everyone that we should give them a chance to be the government. “Try 5 years and if you don’t like, you can always vote Pakatan out”, they say.

“Try 5 years and if Pakatan doesn’t perform, you can always change back again”, they tell us.

There is no way for anyone to ubah the Selangor government any time soon. It’s a LIE that the Dapsters tell by giving the false impression that to change back is easy peasy like taking a different brand of soap from the shelf.

See how Pakatan have consolidated their position once they’ve got power in their hands.

Now with 44 seats, Pakatan has a 2/3 majority in Selangor.

Remember? They were shouting that we must deny BN their 2/3 majority. They agreed that for a two-party system to function, it’s best that neither party ever has two-thirds.

What they did once in power was to obliterate the MCA and Gerakan.

Now there’s no longer any Chinese to check the DAP hegemony. There is no longer any BN Chinese component left standing to be able to halt the DAP juggernaut.

In the 60-odd years of the MCA’s existence and during the cycles when MCA was on top of the wheel, the party never went all out to crush the DAP. But just this one time that DAP gets on top of the wheel and see what they’ve so swiftly done to their Chinese rivals.

DAP claims to promote democracy. What kind of democracy is promoted by their tyranny of taking total and iron-fisted control (of the social media, for example). 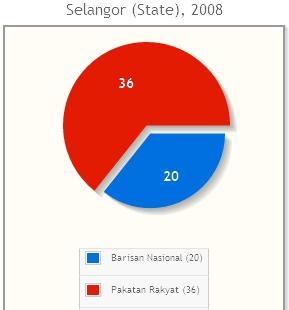 There is no Johor.tv, Media Johorku, Johorkini, Johor Times. The BN in all their years of almost one-party rule has never been as hell-bent on brainwashing the masses 24/7 as Pakatan.

And just look at all the scissorsing and sabotage that their covert collaborators are capable of.

The Star covered up this story — Hannah Yeoh the now Selangor Speaker – previously Facebooking when the state assembly was in session.

And The Star would not be interested in the story that Hannah Yeoh is the Adun who is the worst ponteng kaki.

Her attendance record was a remarkable 53.85% in 2010. Like Wong Chun Wai, London beckoned for Hannah Yeoh and she had rather be in the English capital on some Bangsa Malaysia jaunt than be present in the Dewan.

And you can bet that Si Gunting will bury this negative news too.