What’s interesting in the above seat configurations is the total absence of PAS. 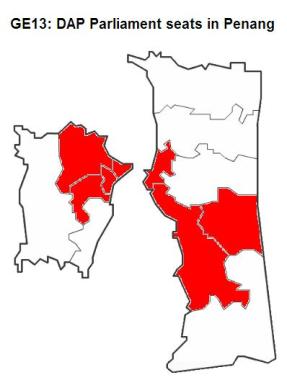 The electoral map above shows the distribution of DAP Parliament seats in the country.

DAP occupies the Kinta Valley and Klang Valley crescents. Plus the party has successfully muscled into Johor untuk ini kali.

In terms of Parliamentary representation, the DAP lacks any in the Malay states of Perlis, Kedah, Kelantan and Terengganu.

However God’s Army is on a forward march.

For the first time, DAP has made inroads into Pahang by winning Raub through its Malay candidate Sakmongkol. DAP had failed to capture any seat in the state in the 2008, 2004 and 1999 general elections.

Taking Malaysia as a whole, the DAP has its strongest influence in Penang.

The Star group editor Wong Chun Wai is a Penang boy and an alumnus of one of the island’s well-established mission schools.

Scissors no longer kept in the fold

UiTM media researcher Kiranjit Kaur is today quoted by the Straits Times (Singapore) as saying that in the wake of the formation of Najib’s new cabinet without any MCA ministers, the newspaper owned by the Chinese party “may not feel it has to toe the party line too much these days”.

Kiranjit has also detected a shift in The Star‘s reporting following the conclusion of GE13. (Source: here)

In other words, there is now no stopping The Star from going full-blown Jerusubang.

Furthermore, the top management of the Star Media Group have themselves acknowledged that the bulk of their viewership is urban and anti-establishment. 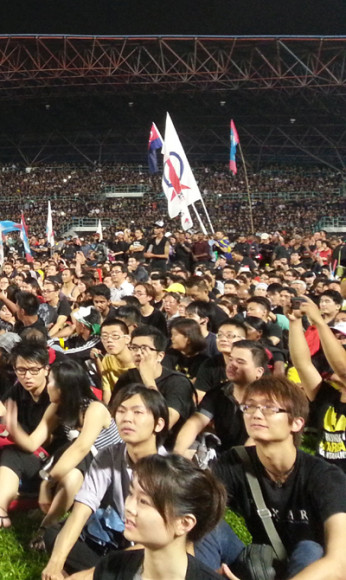 The main thread of the DAP 3.0 fabric is Evangelism.

Lim Guan Eng should be asked point blank what religion he professes.

The party’s Perak warlords – the Ngeh-Nga cousins – are evangelists. The majority of the DAP Parliamentarians in the Klang Valley are Christians. DAP holds 7 seats in Sabah and Sarawak on the strength of the Chinese-cum-Christian vote.

Results of the GE13 were announced on May 6. Before the dust could even settle, on May 8 there was already the mega rally in Kelana Jaya kicking off the #Black 505 series of protests. Those in the stadium that night were mostly Chinese.

DAP has been in a confrontational mode ever since the outcome of the election was confirmed. Lim Guan Eng and his father Kit Siang are non-stop with their provocation.

Does the DAP believe that confrontation will not be met with equal and opposite force?

No Chinese support for BN in Penang

Chinese Gerakan and MCA party members themselves did not vote the BN.

Gerakan contested 11 Parliament seats and lost 10. Its worst performance was in Tanjong where Ng Song Kheng obtained 6,865 votes out of the 42,913 cast or 16 percent. Tanjong is an 85.2 percent Chinese electorate seat.

As we know, Gerakan is a Chinese-based party. Gerakan did not have a single Malay among its 11 candidates for Parliament yet the party’s best performance was in Simpang Renggam, incidentally the only seat that the party won. It got 56.8 percent of the total votes cast in Simpang Renggam, which has an 57.4 percent Malay electorate.

Gerakan received a grand total of 210,773 votes for its 11 Parliament seats overall or an average of 19,161 votes per seat. Compare this with the 45,691 votes per seat average for the DAP.

Gerakan has been the ruling party in Penang since the days of Lim Chong Eu.

Of the votes cast for Parliament in Penang, DAP obtained 43.9 percent, Umno 16.3 percent and MCA-Gerakan collectively 15.3 percent. The disparity of ethnic support in Penang is causing a great imbalance.

The Penang Chinese kiss the ground that Lim Guan Eng walks on. It is not without reason that Mansor Othman, the former Deputy Chief Minister of Penang blurted that his boss enjoys Tokong worship.

Guan Eng is now onto his third Malay deputy in the short span of 5-plus years. The current one may not last long either given the Dear Leader’s legendary rages.

Under such a choleric leadership and with the state’s severe fault lines, there’s more than an even chance that Penang will be a flashpoint sooner rather than later.

74 thoughts on “The political mood in Penang”