Datuk Tee Lian Ker is a member of the MCA central committee.

He says “We gotta give due respect. @staronline is not Utusan. Thus give “space” [to the opposition]. 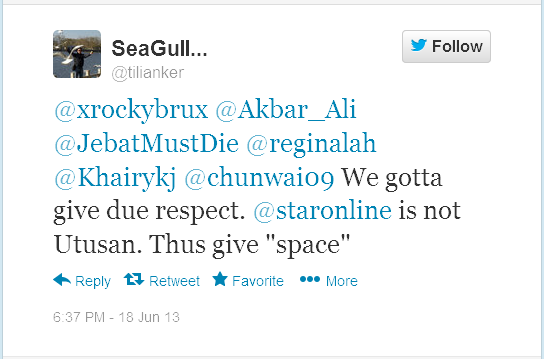 Datuk Ti tweeted on 18 June 2013 that “By and large, Stars readership wanted a balance reporting thus…”

He asked: “You prefer Star to engage with the middle or lose their readership?” 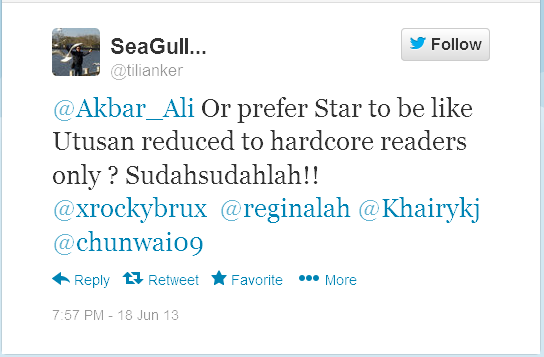 Screenshot above: “Or prefer Star to be like Utusan reduced to hardcore readers only? Sudahsudahlah!!”

Datuk Ti’s views are representative of the MCA top leadership. He says: “[Every time] we have Ib Ali type of blast on innocent parties, we’re going to push more away…”

Datuk Ti’s next tweets a point of view that beg some hard probing:

When he says “Let’s tackle urban voters differently!”, I should like to know for whose benefit is The Star tackling urban voters?

The last tweet I wish to highlight of Datuk Ti Lian Ker’s is what he says about “Star readership is ‘middle’ thus we cannot set Utusan std on Star plz!”

By saying that the Star readership is “middle” and thus MCA and its media cannot be made to abide by the Utusan standards, is he implying that the Malay broadsheet – by not being middle – is “extreme”?

Utusan has been alluded to as “racist” by The Star.

If that is what many opposition supporters believe Utusan‘s relationship is to Umno, then what is The Star‘s to the DAP, pray tell us?

Why is the MCA mouthpreach delivering DAP sermons?

What say Utusan in all of this?

Since Utusan is the maligned party by The Star, I feel that the MCA and its Jerusubang media should not be allowed to get away with having only their side of the story (justification) spread in the social media which is under the sway of the DAP.

Previously Sarah had informed us that we can make known hot issues to the Utusan editors.