Two small parties made an outsized impact during the last general election — one by showing up Pakatan’s selfishness and the other by showing Umno the unhappiness that pro-establishment Malays have with the BN.

“We were bullied, promises to us were broken, and tackling our problems took a back seat as everyone were concerned with their own well being, and so on,” Malaysiakini reported Dr Nasir as saying in his speech at the party AGM two days ago.

Bullying is a predominant trait among the leading Pakatan politicians and hence earning them the description DAP SuperCyber Bullies.

See screenshot below of a Facebook comment: “Can you guarantee Sara [sic] would not jump ship?” is a most insulting reference to the PSM deputy chairman M. Sarasvathy.

The Facebooker Foong Mun-Keong seems to have forgotten that it was the DAP Chinese representative who had actually jumped in Jelapang.

But typical of DAP supporters, he casts suspicions on an Indian for something Sarasvathy has not done and for which there is no hint at all that she would do.

Foong Mun-Keong’s character assassination of Sarasvathy is reflective of the typical behaviour of the DAP Chinese who try and smear the reputation of good people because they themselves are so very kiasu and greedy. In this case, it is the DAP’s insistence on the Jelapang seat.

James Ngeh Koo Ham, the DAP Perak evangelist warlord, justified why his party deserved to contest by saying, “Jelapang state seat with 90% Chinese voters will have its interest best served by the DAP”.

So much for the DAP’s proclamation of colour blindness.

Scissors in the back

Political observers could see the scissors poised over PSM’s back from very early on but like all credulous victims, PSM were the last to be willing to concede the obvious and inevitable.

Finally even PSM chairman Dr Nasir had to admit, “They conveniently ignored the fact that they had sabotaged PSM in secret in the run-up to the 13th General Election.” (NST, 29 June 2013)

What kind of berbelit-belit grandmother story did The Star concoct as a title compared to the punchy ones by Malaysiakini, FMT and NST?

Because the Scissorati are carrying out the usual cover-up for the malfeasances of their dearly beloved Pakatan, that’s why.

That was the predicament of PSM. Pakatan did not want to be friends with the Indian-majority party. Simple as that.

Even Dr Nasir was disappointed that Pakatan saw PSM as the weakest link and “belittled [their] friendship”.

On the contrary to the “weakest link” allegation, PSM is the most principled party in the opposition. The Big Three do not come anywhere close.

After being alerted to the PSM’s misfortune, and learning from the PSM experience, hopefully victims of the scissorati would wise up before it is too late and BN fatally hemorrhage from the MCA Scissors stabs in the back. 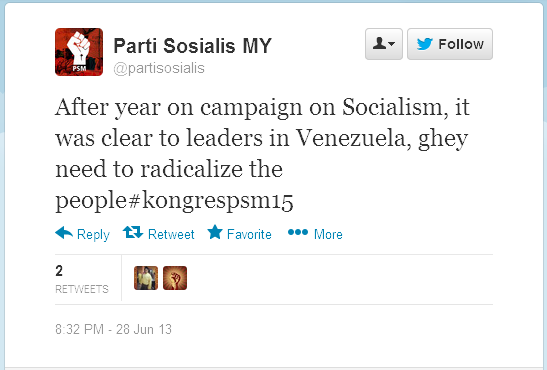 PSM the clenched fist party, in one of its tweets on Friday about their AGM, also talked of the “need to radicalize the people”.

What does PSM mean to do and how do they figure to radicalize the people?

Another small party that took part in GE13 has ‘succeeded’ where the PSM faltered in this regard.

It is to deliberately create three-cornered fights and play the role of spoiler.

Ustaz Yusoff said in a statement carried on the Isma website on 11 April 2013:

He is refering to constituencies where Malay voters are the majority but the seats given to non-Malays to contest.

Isma was as good as their word and fielded a total of 9 candidates for Parliament — see chart below (click to magnify).

In every single one of those nine urban and semi-urban seats, the candidates from both BN and Pakatan were all Chinese or Indian.

The 9 seats contested by Isma are Subang, Kapar, Batu, Seremban, Padang Serai, Tapah, Cameron Highlands, Alor Setar and Selayang where the electorate comprise either an outright Malay majority (more than 50 percent Malay voters) or where the Malay voters outnumber voters from any of the other races.

The Isma men lost their deposits. (A candidate forfeits his deposit when he fails to collect a minimum of one-eighth of the votes cast.)

It is clear that Isma entered the fray in order to signal to Umno that non-Malay, non-Muslim leaders are rejected by their supporters. (Isma is a Malay-Muslim pressure group that got Berjasa to loan them a political party logo).

Isma’s move does not augur well for the minorities.

Isma made a good showing in Seremban where DAP’s Anthony Loke beat MCA’s Yeow Chai Thiam. The 6,866 votes garnered by Isma’s Abdul Halim Abdullah is slightly over one-fifth that received by Dr Yeow.

Furthermore Seremban registered a whopping 1,486 spoilt votes indicating that a number of residents refused give their support either to MCA or DAP. Who are these 1,486 voters?

One Parliamentary constituency where Isma could almost have made a difference is Cameron Highlands. Here MIC president G. Palanivel had squeezed through by the skin of his teeth.

Palanivel won the seat with a slim majority of 462 but the spoilt votes were double the number – 877 – and the votes for Isma-Berjasa were 912.

Isma put up a credible showing in Kapar as well where Mohd Pathan Hussin obtained 6,289 votes in the 51.5 percent Malay majority area. The seat was won by PKR’s G. Manivannan beating MIC secretary general A. Sakthivel.

Isma did not go into GE13 to win but merely to express its disgruntlement. The strong message to Umno is that pro-government Malays are unhappy over the BN coddling its Chinese and Indian component parties.

Writing on the wall

Rest assured that there will be a Malay tsunami in GE14.

Umno must now ponder seriously on where the Malay tsunami will hit when it sweeps ashore. It could wash away PAS as in Kedah or it could mercilessly drown Umno.

PSM is flailing its arms about “radicalizing the people”. PSM does not have the reach to do this.

The bigger risk is the radicalizing of the Malays, both in the areas of nationalism and Islamism. Malays will be more susceptible to this happening should Umno still choose to remain so lackadaisical.

Even the moderate Malays who comment in this blog are wondering why Umno is allowing the MCA to permit its media empire and its many tentacles to choke the BN.

Does Umno condone the behaviour of the MCA that is the owner of The Star and their slandering political blogs such as Stop the Lies?