Peninsular Christians have accused Umno of starting the whole Allah issue. Read The Nut Graph article of 12 January 2010 which said that far from being a moderate Muslim state, Malaysia has become “a fascist state under BN rule“.

The Nut Graph Christian editor Jacqueline Ann Surin wrote that the firebombings did “not begin with narrow-minded and ignorant Muslim pressure groups threatening to spill blood to assert their sole right to use ‘Allah’ but instead started with the Umno-led BN government’s 1986 ban.

Jacqueline Ann Surin reminded Malaysians not to forget that it wouldn’t be an issue at all if the Umno-led government had “respected the legitimate rights of other faith communities”.

“The ‘Allah’ issue would not have spiraled into, to quote a friend, suburban terrorism — and it is terrorism when violence and intimidation are used towards achieving one’s goals — if the Home Ministry had not acted to deny the rights of non-Muslim citizens in the first place.”

Is Umno accountable for the situation we find ourselves in as claimed by Jacqueline Ann Surin?

She is convinced that “the government is responsible for this narrow-minded and bigoted interpretation of who can use ‘Allah’ in Malaysia”, as well as ignoring the flames fanned among “the bigots in our midst” and whose bigotry have caused others to be stripped of their rights.

Jacqueline mentioned that although “a couple of politicians including Umno Youth chief Khairy Jamaluddin have now [January 2010]  called for an interfaith dialogue to resolve the issue, “really, the time for dialogue is over”.

“And mind you, the use of the word ‘Allah’ is not a “sensitive” issue, as top Umno leaders and the Umno-backed Utusan Malaysia are fond of restating repeatedly. It’s a copyright issue. And there is nothing at all that gives Muslims in Malaysia, or elsewhere, the copyright to use the word to refer to God and deny others the right to do so.”

“But if Christians and Sikhs have not been confused thus far from the use of ‘Allah’ in their worship, what makes Malaysian Muslims so special that the government should continue to perpetuate their ignorance about a word that pre-dates Islam?”

“Additionally, since copyright for the word does not belong to Muslims, what right do Muslim groups and politicians have to demand that non-Muslims can only use ‘Tuhan’ and not ‘Allah’?” …

… while at the same time accusing Umno of “perpetuating this age of ignorance”.

Jacqueline concluded that the “BN-sponsored fascism” is “no different from the Nazi state”, and urged her readers to make no mistake that it is surely the BN government that started all of this.

“To say that Christians should change the word Allah to Tuhan is to disrespect the rights of a religious group – Christians, in this case – to have autonomy and control over their own religious texts.”  — ‘Allah row: What’s the name of the game?

Ong argues that Christians must be allowed to translated ‘God’ into ‘Allah’ because otherwise “Lord God” in the Bible would need to be translated into “Tuhan Tuhan”.

Ong ended his article by saying: “I hope that we can have a mature and sensible discussion over this matter rather than to resort to baseless accusations and impractical ‘suggestions’ that ignores due process.”

I too blame Umno for all that is happening now. I fault Umno for failing to get a grip on the situation.

It is through Umno’s neglect that the evangelistas have gained firm control of the public discourse and subversives like The Sneaky Star have been able to get away with the Scissorsing that they’re doing.

The evangelistas are successfully portraying to the outside world (that communicates in the international language English) as if they are the only ones who are “mature and sensible” whereas the Malays are depicted as resorting irrationally to “baseless accusations”.

And the evangelistas are so conniving that they make out as if it is the “non-Muslims” across the board who want to use the Allah word.

This deceit is typical of their forked tongue.

In reality, Buddhists do not express any desire to use the word Allah. Neither are the Hindus clamouring to print the word in their scriptures. It is only the evangelistas here who are trying to steal Allah but they attempt to drag all of Malaysia’s other non-Muslims into the imbroglio. 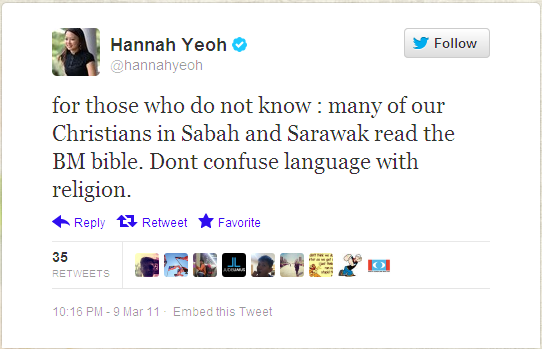 A quarter of the world’s population is Muslim and if you asked the billions of them who is their God, they will unanimously give a single, unwavering reply — “Allah”. Their clarity is unequivocal.

Now you ask the DAP evangelist politician – who is given a column in The J-Star so that he can reach an urban Malaysian audience of 5 million – and he bleats about the difficulty of translation resulting in the doubling of “Tuhan Tuhan” should the Christians be forbidden from using ‘Allah’.

Their God, apparently, can take on any name as suits the prevailing local conditions.

And yet the evangelistas point the finger at others with regard to “confused” and “confusion”. Umno should just tell Ong Kian Ming and his ilk “Frankly, we don’t give a damn about your translation nitty-gritty.”

Why is it that Umno is unable to prevent its BN components, like the MCA and the media which this Chinese party owns and controls, from undermining the BN’s stand on the ‘Allah’ word? Why shouldn’t Umno be blamed for our patience now coming perilously close to snapping?

76 thoughts on “Allah issue: Christians say it is “urban terrorism” by “BN-sponsored fascism””