The J-Star two days ago reported that an assistant principal of a secondary school is being investigated on the charge of telling some students to “balik India, China”.

The usual and wholly expected public uproar greeted the publication of the news. The teacher was immediately faulted for her remark.

Those indignant Chinese blaming the teacher did not care to delve into what had been the provocation, which was that the Bangsa Malaysia Malaysian First students of Petaling Jaya allegedly refused to sing the national anthem during their school weekly assembly.

(a) It is not difficult to imagine the attitude of those youngsters who are boycotting Negaraku.

(b) It is just as easy to guess where the rebellious teenagers got their attitude from.

(c) And it is no less easy to see the arrogance that goes with such an attitude.

(d) And you must be prepared for the possibility that this attitude will acquire absolute power in our country. 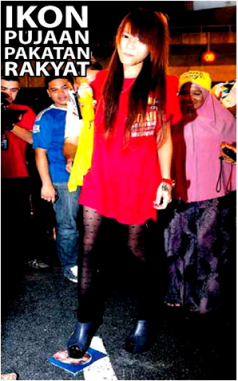 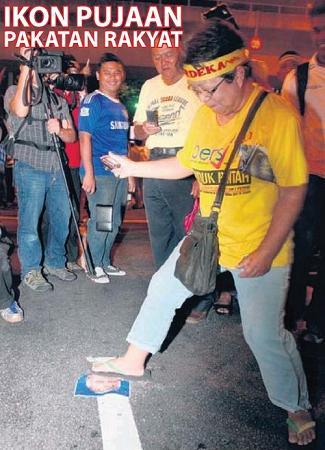 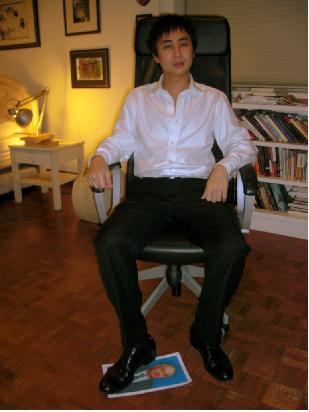 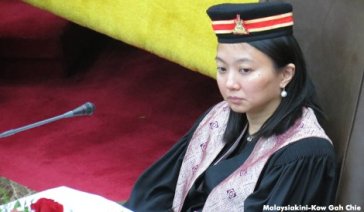 Let’s examine some of the complaints.

The MCA, on the other hand, has zero ability to win a single Chinese-majority seat and near zilch capacity to deliver Chinese votes to the BN. So how does MCA expect Umno to treat them, especially when the Gunting dalam Lipatan media owned by the Chinese party is perpetually undermining Umno and campaigning for the opposition. 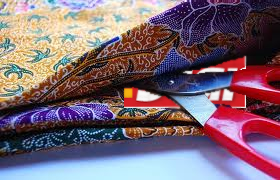 Well, the MCA didn’t give a damn either to its own efforts for the GE13.

Not only were MCA’s campaign workers absent from the ground, the MCA party leaders themselves sabotaged the BN candidates during the polls. Among them, Datuk Liew Yuen Keong who is the Serdang division chief and his deputy Datuk Ho Hee Lee both had their membership suspended by the MCA disciplinary committee. 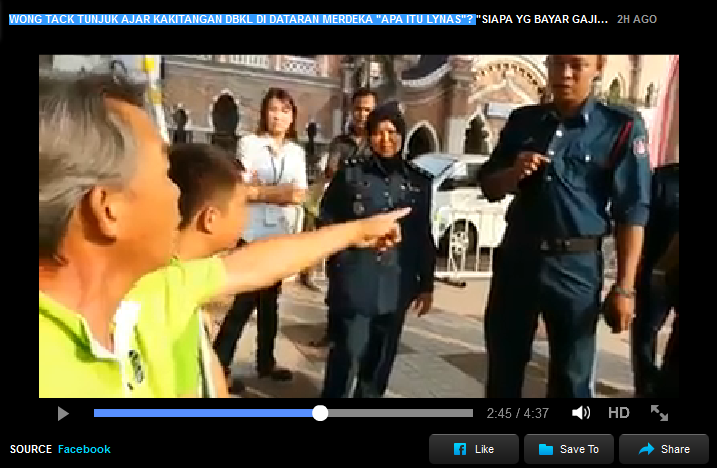 Click on the image above to view the video clip. It records Wong Tack, the DAP GE13 candidate for the Bentong Parliamentary constituency, confronting DBKL enforcement officers.

Please watch the tape (via the linked Facebook page) and see who is being the aggressor and treating other races like shit. 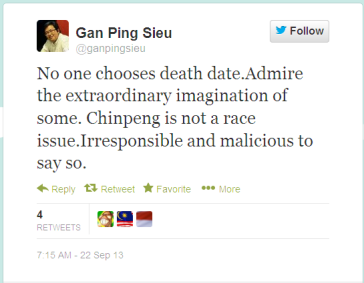 Gan Ping Sieu tweets that it is “irresponsible and malicious” to say that Chin Peng is a race issue. He similarly tweeted that it is a “dumb argument” for Perkasa to react to Chin Peng as if it were a Malay issue.

And how can the issue not take on a racial tone when the Dapsters are adamant on spinning it in the same way like how they can spin Bak Kut Teh into an organic vegetarian dish, and May 13 as NOT being a race riot? 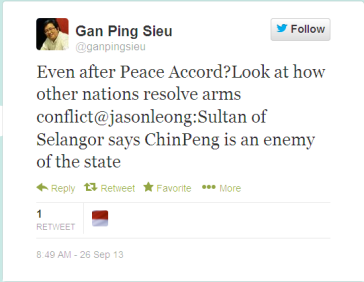 Furthermore, if Gan Ping Sieu wishes to raise the “irresponsible” factor, can we ask if the Chinese – particularly Gan’s Scissorati friends in The J-Star – have behaved responsibly in the way they have been spinning in their Chin Peng coverage with his death given Page 1 treatment in contrast to Page 18 for their story on the Selangor Sultan calling the late communist leader an enemy of the state. 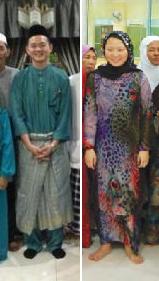 I am gobsmacked that the Evangelista Bintang Lima have the temerity to portray themselves as the victims in this matter.

The Nut Graph editor Jacqueline Ann Surin in her article ‘BN-style resolution to Allah issue‘ had written with regard to Minister in the Prime Minister’s Department in charge of Islam:

“Hence, Jamil Khir [Baharom’]s proposal for an interfaith dialogue is either a half-baked public relations exercise to demonstrate that the Malaysian government is fair to all, or, Allah help us all, the minister doesn’t know what he’s talking about.”

“And so, what was even more troubling about the home minister [then Hishamuddin Hussein] was his description of the suburban terrorism happening in modern-day Malaysia. […]

“There is also no doubt that the church’s right to use ‘Allah’ is being attacked by the same government that claims it wants dialogue.”

In a separate article on the same theme, she wrote:

“The ‘Allah’ issue would not have spiraled into, to quote a friend, suburban terrorism — and it is terrorism when violence and intimidation are used towards achieving one’s goals — if the Home Ministry had not acted to deny the rights of non-Muslim citizens in the first place.”

Jacqueline then came to the conclusion that the “BN-sponsored fascism” is “no different from the Nazi state”, and urged her readers to make no mistake that it is surely the BN government that started the Allah issue,

What is most interestingly Orwellian to have come out of Jacqueline Ann Surin’s tirade is the graphics below published in her portal The Nut Graph: 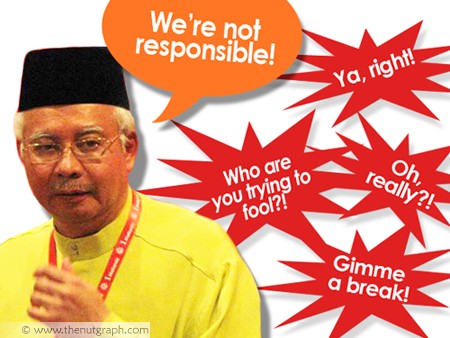 The Nut Graph, Ms Surin and their evangelistas find it a tall order to believe Umno’s disavowal of responsibility for the violence (church arson, firebombing) that took place following the High Court verdict on the Herald-Allah case.

Refer The Nut Graph graphics above:

For them, it’s never the Chinese’s fault in anything. Not even responsibility for the Chinese tsunami votes. Recommended read, Oik on ‘Crocodile Tears‘.

I am in agreement that it is Umno’s fault.

How can we not expect the current situation to be what it is when the paling tidak apa parti Umno insists on rewarding the in-your-face aggression of the Scissorati with its Youth Chief appointing ex-Jerusubang Star and ex-Malaysiakini reporter as his press secretary? 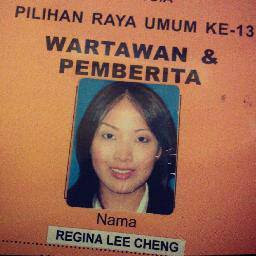 69 thoughts on “Will the Chinese ever be willing to accept any part of the blame?”