Khairy Jamaluddin seems to believe that Malaysia’s 1.4 million-strong civil servants do not have enough ability nor “quality” to get the job done.

KJ believes that the fat salaries paid by the Prime Minister to a whole slew of con-sultants is wholly justified. He says that it is very necessary for these fat-salaried con-sultants to be brought in to “improve [the] public service”.

He argued “you want certain quality, pay” (see his tweet below).

Since the PM as well as Khairy’s Youth Ministry are willing to pay for staff (such as KJ’s Press Secretary Regina Lee) whom they want but who are not civil servants, their decision implies that the con-sultants meet a “certain quality” which cannot be found among the existing pool of civil servants. 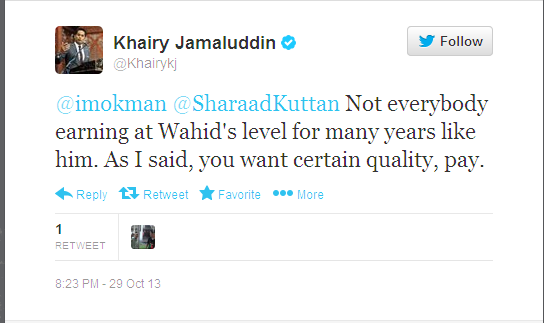 @imokman counters KJ by saying: “quality = pay is also a simplistic argument, look at the pay of Kenneth Lay of ENRON before it went bust”.

@imokman adds that the “chairman of Syabas is well compensated too, but it is not a representation of quality, still needs govt bailout” 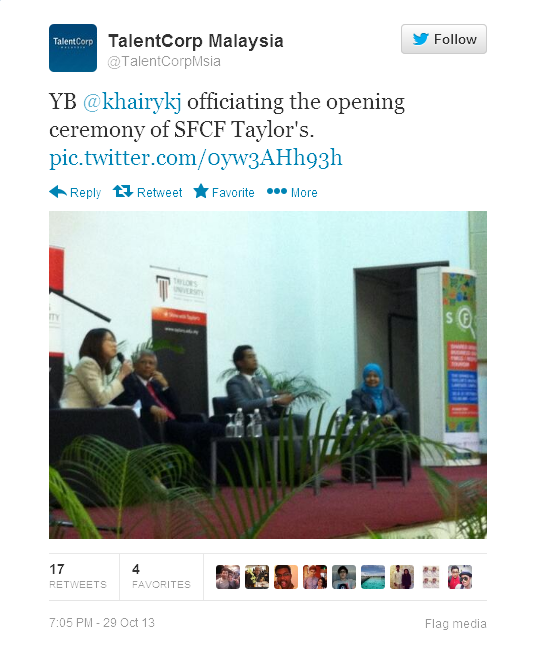 The CEO of TalentCorp receives a monthly salary of RM30,000 and a monthly car allowance of RM5,000, annual bonuses and allowances of RM60,000 and an overall income of RM420,000 yearly.

So what has his TalentCorp achieved? Are the numbers of re-emigrated Dapsters (that TalentCorp has managed to entice to come back) big or small? Is their return a good thing or bad?

KJ asserts that “we need to pay to get the best” (see his tweet below). Apparently, Malaysian civil servants are not “the best” and hence the gomen has to rope in outsiders — the expensive best con-sultants — in order to meet KJ’s benchmark for quality. 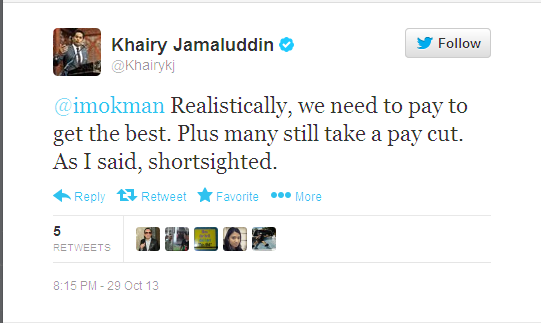 Better than all the rest … 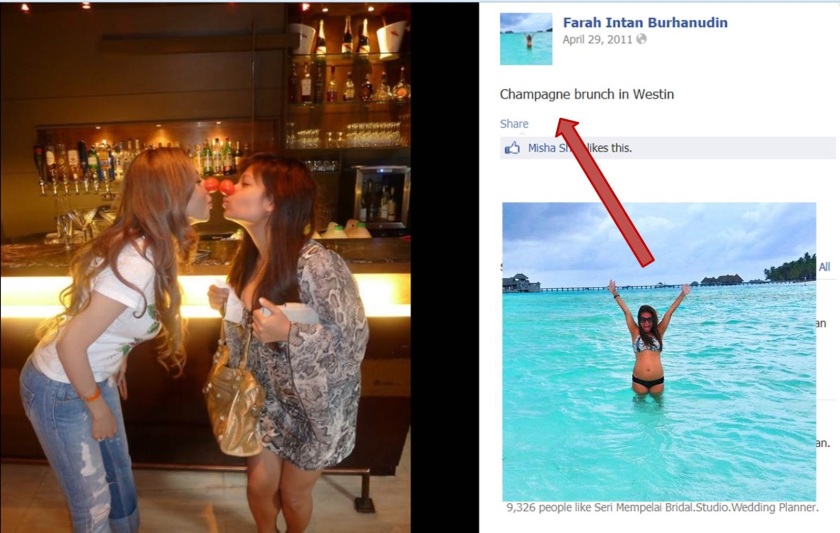 A Pemandu con-sultant (senior manager) —  equivalent to a Grade 54 civil servant — has a maximum salary of RM21,000 a month. The annual income of a Pemandu senior manager is a quarter of a million ringgit.

So how much does Pemandu senior analyst Farah Intan (photo above) get paid? She is in charge of monitoring the performance of the police, btw. 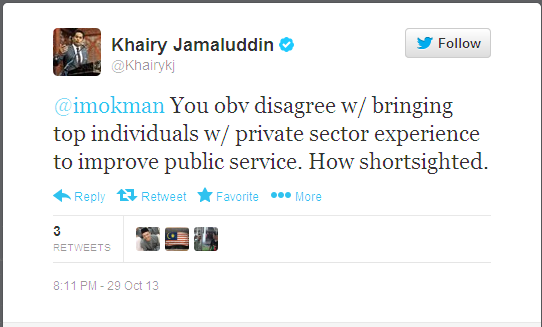 If you do not agree with Khairy that “bringing top individuals w/ private sector experience to improve public service” (KJ’s tweet above) is justified, then you are a most “shortsighted” person.

Syabas to the Youth and Sports Minister for bringing in a woman on top with private sector experience to improve the public service in his Ministry.

According to KJ, “Everything has to be benchmarked on performance”.

We trust that the performance of his Scissorati Press Secretary hired from the J–Star meets with the Sports Minister’s satisfaction.

In his 2012 Budget speech, Prime Minister Najib Razak announced ‘2012 as the year of National Innovation Movement’. He said to realise this aspiration of pushing innovation, his government had planned “several strategic initiatives with an allocation of RM100 million“.

This included the introduction of the Cipta 1Malaysia Award (C1PTA) to “recognise the most innovative inventions of students and youth at the national level”. So what stunning innovation has been cipta-ed from a part of the RM100 million funding, may we ask?

Meanwhile, in his 2013 Budget speech, Najib continued his support for “inclusive Innovation” by granting Agensi Inovasi Malaysia together with Mosti a total of RM2 billion to carry out a Green Technology Financing Scheme (GTFS) until 31 Dec 2015.

Also included in the “inculcating innovation” focus is the initiative to establish an Intellectual Property Financing Fund scheme amounting to RM200 million.

Most recently in his 2014 Budget speech, Najib talked about the registration and patenting of intellectual property which will be carried out by MaGIC — the Malaysian Global Innovation and Creativity Centre which is “a one-stop centre to empower entrepreneurs”. MaGIC has been allocated RM50 million.

The government further proposes an allocation of RM120 million for an integrated package to increase innovation and productivity of SMEs.

So for all the billions splashed on “innovation” can we SEE it what the money has produced? What are the products/results of these innovation initiatives?

.
Below: KJ’s Press Secretary @reginalah tweets about him all the time
. 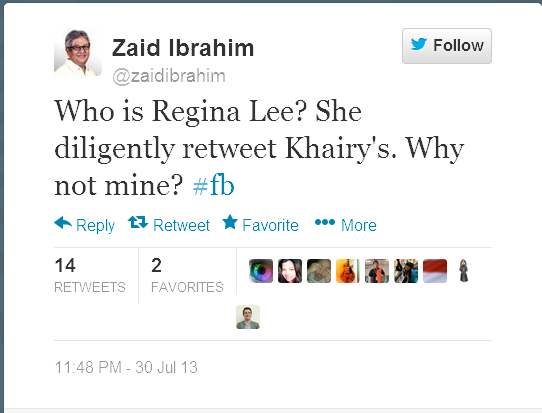 Nice job in the innovative training, MCA and The J-Star.