Below is Mujahid Yusof Rawa who is vying for one of the PAS vice president positions in the coming muktamar.

Mujahid has recently been making a name for himself, alongside his predecessor Khalid Samad, as the opposite numbers to DAP SuperCyber Bullies Hannah Yeoh and Ong Kian Ming.

If Hannah and @imokman are famous (or infamous) for the evangelista posturing in the masjid and surau, then Mujahid and Khalid are their kindred spirits at the other end visiting the churches.

The Malaysian Insider has a story on it today titled ‘As Allah debate continues, PAS leader gets more calls from churches for interfaith dialogue‘. Hannah Yeoh has most kindly publicized the article to her 83,270 Twitter followers.

The irony is this

It is DAP Christian fanatics and the Muslim extremists who are screwing up the relationship between the adherents of the various faiths, and now they’re the very same ones seeking publicity for conducting ‘interfaith dialogue’.

Mujahid told TMI: “The court ruling [on ‘Allah’] and the very public debates have not have not dampened my efforts to mend broken relationships between Muslims and Christians”.

Now for the next bit of irony

It is the DAP evangelistas who are trying to drag the other religions into their spat with Islam — see ‘Sah! Guan Eng memang mencampur-adukkan politik dengan agama (ini buktinya)’ — but at the same time, they’re pretending that they be the loving peacemakers. What hypocrites!

The TMI article reports that:

That’s a lot of blame being heaped on the right wingers. Very soon Mujahid will be overtaking Khalid Gereja as the opposition’s most beloved PAS Malay churchgoer.

Injecting some sense into the debate

Dr Chandra Muzaffar is a man the oppo people love to hate but I find that he speaks a lot of common sense.

“Citing the refurbishment of the 130-year-old Sri Sundararaja Perumal temple in Klang, Chandra pointed out that it was valid as it was enshrined in the Federal Constitution that religious communities have the freedom to maintain their places of worship.

“He said the refurbishment of the Hindu temple in the centre of Klang town does not affect inter-religious ties nor does it harm anyone. He said it should not even be an issue as Malay NGO Ikatan Muslimin Malaysia (Isma) has made it out to be.

“Chandra was commenting on the remarks made by Isma that the refurbishment of the temple would create a negative impression among Muslim tourists who visited Malaysia. He pointed out that the temple refurbishment does not affect anyone.”

Chandra said restraint was a precious value which should be brought to the forefront to preserve peace. Isma is evidently lacking in that precious value.

Isma is also likely to be the “right wing”, “extreme” Muslim force cited by Mujahid. Unless he means Umno, of course. 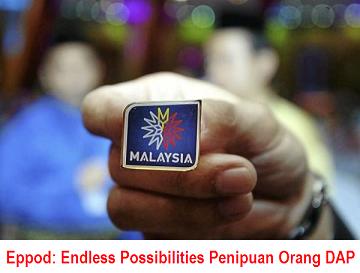 This is the second time that P. Uthayakumar is spending his Deepavali in prison. The first was under ISA at the Kamunting detention camp, Taiping in 2008.

Uthaya says he is in cell No.12, which is the very last death row cell and immediately next to the hanging chambers. He shares the cell with five other prisoners who are hardcore criminals.

He adds: “I also heard the hanging floor being let loose open as it was being tested, perhaps for other imminent hanging.” Are the prison authorities trying to spook him, by any chance?

Although he has been sent to the Semenyih government clinic after persistent requests, the doctor who examined him refused to admit Uthaya into hospital for his deteriorating prolapsed disk condition.

Hence he has to remain in his 10’x10′ cell which is dark and dirty, cramped and damp, cold at night but hot and stuffy during the day.

Indians were the first to feel the effect

(Read ‘Can Oarfish Predict Earthquakes?’ and ‘Oarfish Warning : 7.3 Earthquake Hits Japan’ to understand how signs and symptoms are felt earlier by those living in the fringe)

Today in 2013, with the passage of time, we can see things clearer.

A Reuters story headlined ‘Malaysia PM says curb on use of ‘Allah’ key to stability’ on Oct 31 said: “The court decision [on Allah] this month fanned religious tensions and raised questions over minority rights in the mainly Muslim country”.

We must remember it was during 2006-2007 that Hindraf (Hindu Rights Action Force) rose up and gained prominence. That was some eight years ago when the country was still in denial about the heated religious temperature, as well as before the Chinese tsunami happened for us to confirm the breach between the races.

It – the religious tensions – was already there and the Hindus, as a small minority group, were the most vulnerable to it. The bigger and more well-to-do religious groups were better insulated but the Indians felt it first when a spate of temple demolitions took place.

Uthaya’s political predicament is this

The same belligerence and intolerance is on display in the Perumal temple episode narrated by Dr Chandra Muzaffar.

Uthaya was fighting for the rights of minority Hindus who were caught in the crosshairs of religious tensions that were spiralling into a conflict situation.

From the vantage point of our present-day hostilities, we can understand the development which we could not comprehend then.

Uthaya was whacked by both sides with being labelled “racist” by Lim Guan Eng and his blogger hatchet men and their Scissorati friends – Regina Lee then with Malaysiakini was one of them – and by the Firsters Evangelistas, needless to say.

On the other side of the fence, Umno, Utusan and the Malay groups portrayed Hindraf as gangsters and having ties with Hindu extremists abroad.

The truth of the matter is, Uthaya was and remains an activist for a justifiable cause even if you do not agree with his means of pursuing it. He was a victim of bad press.

Uthaya has already served 1½ years of ISA detention for the sedition charge against him. The chapter should have been closed already. His current imprisonment is double jeopardy.

He ought not to be serving prison time any longer. It’s best that his sentence be commuted.