‘Is not Islam being shamed?‘ (Malaysiakini, 30 Oct 2013) is KJ John’s most recent column. Implying that Islam is being shamed by the religion’s Malay adherents is a strong insinuation indeed.

Despite all that shopping in Little India Klang, Hannah Yeoh got no Indian clothes to wear in her Deepavali banner greeting today. Compare their Hari Raya Puasa greeting a couple of months ago all togged up in baju Melayu and baju kurung.

Talking about the need for “mutual respect” between the different faith systems, KJ John writes:

“Otherwise, whether we call it Raya Korban or Festival of Lights, light cannot be shed on ignorance and people will continue to live under the weight of their own ignorance; but not education.”
.

When he says “light cannot be shed on ignorance“, KJ is referring to the korban carried out in several national schools recently. 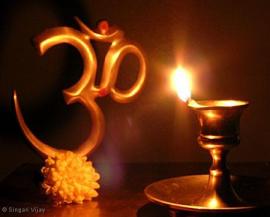 Does the new Education Blueprint promote the school to become an abattoir, he wonders.

“Surely cow-slaughtering cannot be a subject or the content or curriculum for any national-type school; either primary or secondary. It cannot even be content for Moral or Religious Studies (for Islam), so why is the school practising such “unconventional ways of teaching and learning?” Or, is the principal being a zealot, like so many others who appear so irrational in their actions.
.
“My only conclusion is that the school principal is not fit to be one. It is the similar to the other school principal who decided that a child eating in the school bathroom or toilet is not wrong. I would say reconsider for we have teaching in a Malay proverb, “that we cannot eat and pass motion in the same place?”
.

“We cannot teach toleration in schools to only mean that Islam is the only important religion; all other religions are therefore not considered important in schools. Instead, why not explain to all concerned the same reason why one need not slaughter either pigs or cows in schools; it is not a curricular priority.”
.

His next paragraph explains the title of his column ‘Is not Islam being shamed?’.

“When a school principal decides to ‘slaughter a cow within the school compound’ is that really promoting the cause of Islam or that of Malays?  How can then so many other extremists argue for it, when even the minister has gently said this is very insensitive?  I think it not just insensitive, but downright wrong! Why? I write as a Bangsa Malaysian!”
.

What KJ John has written above is an accurate reflection of the views held by the Bangsa Malaysians.

They are also the ones memandai-mandai thinking they know Islam better than the born Muslims. That’s why KJ has taken it upon himself to chastise the Malays that the Islamic faith is being shamed by their conduct.

DAP evangelistas have many mouths

According to KJ John, “the minister has gently said this is very insensitive”.

KJ goes on to add, but then “[h]ow can then so many other extremists argue for it” regardless. Not to mention threaten the MIC Deputy Minister.

“The Government allowed an MIC Deputy Minister to face down these racists on his own despite the fact that we have two Malay-Muslim Ministers-in-charge of Education.

“I still do not understand why our top leaders are so terrified of Datuk Ibrahim Ali and Datuk Zulkifli Noordin. I really don’t.”

The politicians who objected

MIC president G. Palanivel said: “Especially when carried out in national schools. This could be a worrying problem and disturbing for non-Malay students.”

.
MIC deputy president Dr S. Subramaniam said: “We recognise the significance of the Aidiladha celebration, however, we must also take into consideration the sensitivities of other communities.”

.
DAP CEC member Gobind Singh Deo said: “I have received many complaints from distressed residents in Puchong who have complained that cows were slaughtered in school compounds before students, both Muslims and non-Muslims. This is totally insensitive to the Indian community especially.”
.

What we can see is that the Indian politicians who are non-Christians have spoken up whereas the DAP evangelistas and “I’m-not-Indian-actually” leaders have been deafeningly silent.

The Allah issue (see tweet above) had already died down, that is until Lim Guan Eng resurrected it again during his Christmas 2012 message. That’s how the conniving Christian fanatics operate. They are the ones who constantly membatu api. But after having started the conflagration, the DAP evangelistas conveniently chameleon away into the darkness.

Those who stood up against the Islamists in the cow slaughter issue were the non-Christians both in the establishment and the opposition.

Hence the hostilities are directed by the Muslim fundamentalists who support korban in school against the non-Christian minorities seen as the “bad guys”.

Meanwhile the evangelistas, who are always inciting behind the scenes, get to play the “good cop” because they’ve been as quiet as a church mouse and not made a single squeak against the slaughter of cows in school.

On the contrary, the DAP evangelista politicians have even themselves distributed daging korban during Raya.

In the concluding paragraph of his article ‘Is not Islam being shamed?’, KJ John wrote:
.

“All religious systems preach consistency between thoughts, words, and deeds. This is also called integrity of life and living. Whither Malaysia without such integrity?”

.
Nonetheless with the DAP evangelist cult movement, there is clearly no such consistency between word and deed.

They preach religious harmony but look at how nasty they are against the Muslims and the Malays behind your back.

For too long, the DAP evangelista hypocrites have been allowed to get away with playing both sides.

Zaid Ibrahim had said that the government allowed an MIC Deputy Minister to face down Muslim extremists on his own. However, it must be noted too that despite the (clearly mistaken) belief by Malays that the DAP is keen to protect the rights of the minorities, this is not the case at all.

The DAP 3.0 which is under the control of the evangelistas have also allowed Kamalanathan to face down Perkasa, Isma and all the rest on his own.

What is the DAP evangelista stand on the slaughter of cows in school?

62 thoughts on “This Deepavali shine the floodlights on two-faced Firsters and expose the hypocrites!”