TNG – see below – is the nyawa-nyawa ikan portal that previously gave us stories like ‘Wishing for another 13 May‘, ‘For Allah’ sake’ and declared that the arson and firebombing which resulted from the Allah court judgment was “urban terrorism” by a “BN-sponsored fascism”.

Asking “Apa lagi Umno mahu?”, Jacqueline in her column today ‘The cost of saving Utusan‘ lays out several issues that she has with the paper controlled by the ruling party, viz.

the planned ‘bailout’ (a proposed rights issues), the Deputy Finance Minister’s directive to Umno-linked companies to advertise (“abusing one’s public office”), Utusan‘s role as the “channel for government propaganda”, rewarding “unethical journalism that serves the current ruling party’s interests” and even her displeasure at the name of Jalan Utusan.

Jacqueline asks: “With all of that in mind, what exactly is the government saying when it instructs GLCs to increase its ad spend in Utusan and gives the paper the honour of having a road named after it?”

Scissorati snipping away at the nation’s fabric

Essentially, the media in Malaysia are as polarized as the country’s races.

The leading Malay broadsheets Utusan and BH (formerly the broadsheet Berita Harian) are pro-BN. The media in the English language are pro-Pakatan with only the New Straits Times deemed the sole English paper not to be siding with the opposition.

What made the pro-Umno bloggers unhappy above however made Jacqueline Ann Surin very happy.

“Jacqueline Ann Surin was thrilled to bits when The New Straits Times had to issue a page-three-lead apology to Bersih 2.0, Suaram, the Centre for Independent Journalism and Merdeka Centre for publishing a false and baseless article that defamed them.”

Jacqueline did not say whether she was equally thrilled to bits when recently ‘The Malaysian Insider issues fourth apology in over a week‘.

A country divided by language

The readership of Utusan is only one percent Chinese and we wouldn’t be surprised if they comprise mostly mualaf, much like the paper’s columnist Ridhuan Tee Abdullah.

Other newspapers do not have as much traction as Utusan in the Malay heartland. The rural areas are also the mainstay of support for Umno. Hence it would not be wrong to equate Utusan as the flagship media rallying the Umno votebank. 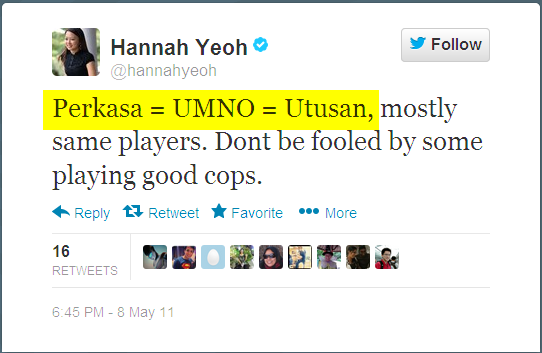 The Chinese paper op-eds have been grumbling about the rise in ethnic tensions following the 5th May GE13 results.

What the Indians are complaining about in the Tamil papers, the Malays and Chinese do not generally know.

The front page story in Malaysia Nanban (which has a 100 percent Indian readership) below shows a photograph of Lim Guan Eng and his deputy, P. Ramasamy the Penang Deputy Chief Minister (II). The Nanban article on 24 Oct 2013 says that the DAP bosses are keen to built a Tamil secondary school SMJK (T) on the Penang mainland.

Yet DAP is the Bangsa Malaysia party that wants to ban anything associated with race, such as the Muslim Lawyers Association whose de-registration was demanded by DAP chairman Karpal Singh. Such is the inherent contradiction of the Firster ideology.

Jacqueline Ann Surin reckons that Utusan is bad in its racial divisiveness but makes no mention of the same, if not much worse, faults in the Jerusubang media.

The Scissorati are constantly attacking Utusan and some of them doing so in cahoots with the DAP evangelista politicians. Screenshot below: The Star Editor tweeted that “1Msia for Utusan to print outrageous lies”.

Yet the pro-establishment people are letting the English media off the hook, like when The Malaysian Insider printed outrageous lies against Mukhriz Mahathir on the eve of the Umno party election not too long ago.

In yesterday’s article ‘Aliran goes digital, broadens online presence‘, the NGO which used to publish the Aliran Monthly announced that it is will be going fully online and into social media. In his keynote address to members at their AGM, Aliran president Francis Loh took to task the prime minister, saying that Najib Razak “was now allowing extremists like Perkasa, Pekida and Isma to restore the ketuanan Melayu agenda”.

Handling the media with far more belligerence is Marina Mahathir. In her lawyer’s letter of demand to Isma, Marina requires that the Muslim NGO publish an apology on her terms in its own Isma website and Facebook page, in Utusan and Sinar Harian as well as The Malay Mail Online and The Malaysian Insider. Marina’s choice of the two selected English media, MMO dan TMI, is telling as they are the most Christian-friendly, after The J-Star.

The Sneaky Star which is the TMI‘s twin in their mutual partisan slant favouring the evangelista (the Jerusubang paper tweeted Hannah Yeoh’s appointment as Selangor Speaker a total of 10 times in the span of a single day) must be called to account by having the GLCs pull out their ads from The J-Star and the government agencies cancelling their subscription.

The MCA, in allowing the media it owns and controls to pursue a pro-Pakatan agenda, is really stabbing the BN in the back. KOMA: Kick Out MCA Already.