The PAS muktamar is over. Pakatan remains intact. So there goes Umno’s Plan A.

Nonetheless, from now until GE14, you can be sure that a welcome mat will be kept out for the Islamist party PAS by the Malay party Umno.

Thus the PAS grassroots can only expect more PIS (Provocation, Insult, Slander) to be dished out to them by the Dapsters.

Nature red in tooth and claw

And what should Umno expect going into the future?

For one, the DAP and the MCA locked in mutual embrace.

Umno should also expect that the Chinese will want to ABU, which translates in practical terms as “Kuburkan Umno”.

This being the case, the next move plotted by Umno president Najib Razak to stave off the impending stiletto in the back is awaited with eager anticipation.

What does the Boss Man do? He launches a National Unity Consultative Council to talk shop for six months.

The J-Star today reported the Prime Minister as saying, “It is my fervent wish to see that we will not see each other through racial and religious lenses.”

It does not compute. 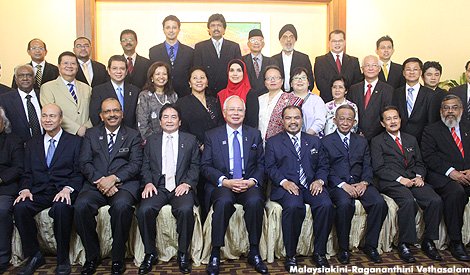 Guess who Najib has included in this newly established NUCC?

Saifuddin Abdullah — the Malaysian Firster beloved of the Jerusubang paper

Mujahid Yusof Rawa — the church frequenter beloved of the evangelistas

Err, again … why did Najib set up this NUCC comprising the three aforementioned individuals along with 26 other assorted title holders?

What does Isma think?

How is Isma reacting to the NUCC initiative and Marina’s role in it?

Please note, you heard it here first: Isma is shaping up to be a force to reckon with. They are Majlis Syura on steroids.

What is Najib thinking?

According to the J-Star:

“He [Najib] said the setting up of the council was a testimony of the Government’s commitment to ensure unity among races remained solid, stressing that nation building could not be achieved if there was no unity among the people.”

There’s a popular saying that goes, “Don’t argue with idiots because they will drag you down to their level and then beat you with experience”.

By venturing into Firster terrain, Umno are only lending themselves to being dragged down to the Dapster putar alam level and allowing the Lidah Bercabang to beat them with experience.

For Najib to adopt the Malaysian First dogma – “we will not see each other through racial and religious lenses” – is already to cede the ideological ground to his opponent. And mind you, this opponent is the Bintang Tiga. Very ganas loh. And they will exploit every opening provided them to the max.

Take my word for it: This NUCC will backfire on the BN.

In his (colour) blindness, Najib could well be the one to cede Allah to the Christians much like how Abdullah Badawi ceded Pulau Batu Putih to Singapore.

Najib does not look like he is able to rally the troops under his banner to go into pitched battle. He is instead leading Umno to a summer camp to sing Kumbaya.

If he is to be the war general, you can rest assured that BN will be sitting in the opposition benches following GE14.

Lose the federal government and you will never get it back.