There is one point from my previous post ‘Dangerous trend of evangelistas lecturing Malays on Islam‘ which deserves particular highlight because it serves to illustrate the dangerous presumption in their behaviour.

I hope Muslim readers will ponder on this because you know your religious practice and traditions better.

@YouTiup aka Stevie Chan tweets – see below – that he thinks Muslims should always ask themselves, in time of confusion: what would the prophet [Muhammad] do“.
. 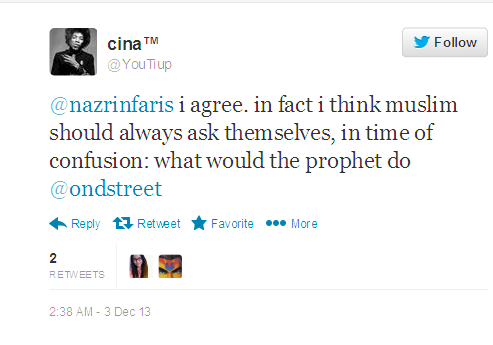 The popular WWJD – “What would Jesus do?” – phrase is the personal motto for adherents of evangelical Christianity and popularized in America in the 1990s, according to Wikipedia.

It is presumptuous for the evangelistas in Malaysia to be so cavalierly pushing this concept in parallel – What would the Prophet Muhammad do? – to their Malay friends.

How does anyone living today know what Jesus would have done specific to the 21st century situations we encounter in year 2013?

Islam has the Sunnah which examines what the Prophet did, according to the oral history recorded and attributed to his companions. But is projection from his time to ours permitted? What he did is no guarantee of ‘what he will do’, hypothetically, especially with regard to the yet-to-be invented things in past ages — e.g. in the field of jurisprudence (DNA evidence, CCTV recording, etc)

I’m not sure what Muslims themselves think about this ‘WWJD’ method of personalized religion en vogue among the evangelistas, and what are the boundaries in Islamic teachings pertaining to this matter.

However it is necessarily to bring up the fact that the self-righteous evangelistas in this country are transgressing unabashedly into the domain of the other faiths and trying to instruct Malays to be ‘better’ Muslims.

I can tell the Muslims, here and now, that the some evangelistas have trampled on the sensitivities of Hindus and Buddhists with an arrogance (plus sneakiness) you wouldn’t believe. Indian Hindus are highly suspicious of their sweet-talking activities.

They have also been actively proselytizing among the Indians and the Chinese to convert them to Christianity. However unlike Malays, we non-Malay families do not have the law to protect our people from the predatory evangelistas.

I do not believe that the Christians were at all innocent in the DUMC affair. In my opinion, the evangelistas did indeed attempt to convert Malays during that episode.

Chinese asked the Malays to pray on Sunday instead

21 thoughts on “The overweaning presumption of the evangelistas”