Heard the adage, ‘Hate the sin, not the sinner’?

That’s how it is with me and Umno.

ABU and I don’t hate Umno.

And ABU and I don’t hate you.

We hate what you have done to our people.

And we hate what you have done to our country.

Haris is claiming that he and his ABU movement do not hate Zahid and Umno.

It is eerie how Haris is channelling Kee Thuan Chye who made famous in Malaysia the phrase “no more bullshit”.

Haris also signed off his call ‘number’ as http://sayaanakbangsamalaysia.net, that is, the Internet source of the picture of the poor Indian boy photographed wearing the mineral bottle slippers.

Updated 5.26pm — Perhaps the Minister Of Urban Wellbeing, Housing and Local Government @mpkotabelud should send his officer to check out the story of the mineral-bottle-slippered boy being spread by Hannah Yeoh, whether true or not. 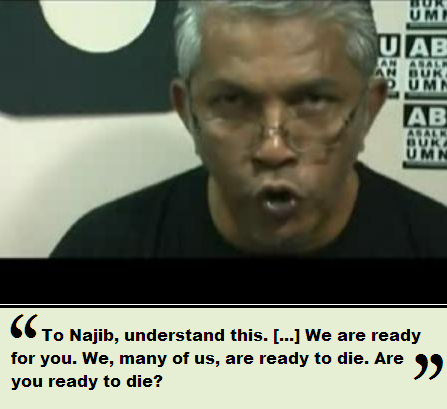 “Most hypocritical people on earth”

Raja Petra Kamarudin’s May 13 article two years ago – linked below – delves into the mindset of people like Haris who claim that they do not hate the sinner but merely abhor the sin.

Haris’ open letter to Zahid must be deja vu for Raja Petra.

Najib Razak, the sheltered aristocrat, appears ill-equipped to deal with double-faced people like Haris and Hannah and their like as illustrated in the cartoon below.

The Saya Anak Bangsa Malaysia movement preaches Lurrrve. They claim they do not hate Zahid, the BN leaders or Umno. But they are the seeds of Lim Kit Siang, also Hannah’s mentor.

Their leading lights can go to the extent of accusing even the weather as “racist” and “so extreme”. See Hannah Yeoh’s tweet.

Now the Ministers (e.g. of National Unity) in Najib’s own department want ‘Race’ removed from official forms. MCA and MIC want the same. This is the SABM ideology apparent within the BN’s own fold.

What do you think is the driving force behind ABU if not pure, unadulterated hate?

Can the patient, moderate, composed and ever-ready-to-compromise Najib begin to understand that ABU wants him ‘dead’?

30 thoughts on “@mpkotabelud, urm … you forgot about ABU lah”