The title of this post ‘Everybody was Sogo shopping’ is a take on the popular song Everybody was kung fu fighting.

Najib Razak has responded to Dr Mahathir Mohamad’s panning of the RM4.5 billion cash handout given by the government to 7 million recipients by saying, “It is better to decrease lump sum subsidy and turn to targeted subsidy. Through BR1M and BR1M 3.0, over 7 million households (received BR1M) totalling RM4.6 billion.”

Hmm, what can RM600 BR1M money buy in Sogo? Well, whatever it is, our government appears to stake its assurance as well as RM4.5 billion that the most essential things in life can be found in Sogo. Now ain’t Sogo lucky? 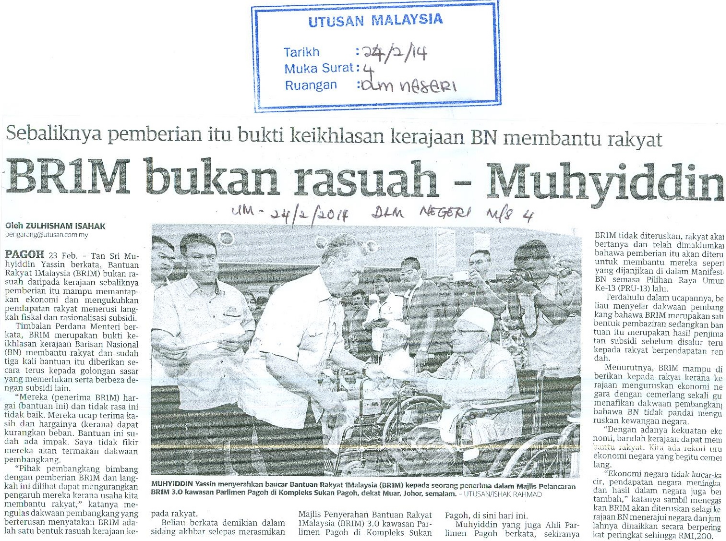 Is the BN government edified that 7 million households – more than a quarter of the country’s population – are considered poor enough to deserve BR1M?

Muhyiddin Yassin’s retort “BR1M bukan rasuah” suggests that his denial is in response to some people who have indeed alleged that it was an election sweetener.

Below is what Dr M said a couple of days ago:

Dunno what is crossing the Tun’s mind although many highly placed conspiracy theorists have shared their speculations.

But nonetheless, what is on Najib’s mind has been reported in the papers. He promises a better next BR1M payment and the sum could eventually double to RM1,200. 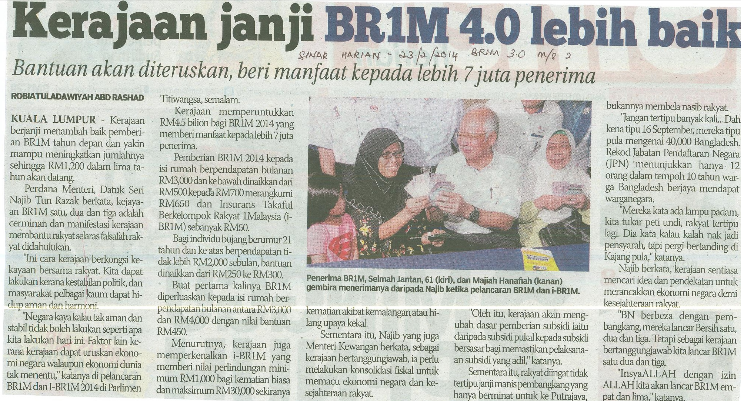 .
The 6th Prime Minister of Malaysia is very detached from the ground. He is clearly insulated from the people, particularly the less than well-to-do ones who qualify from BR1M.

Dr M is right. Too many people are “unhappy with something”.

Tun suggests that the administration should find out what they [people] are not happy with.

I, for one, am quite willing to volunteer to put on public record what it is that I’m unhappy with.

The Prime Minister is allowing the extremists to spit in our faces and pijak kepala dia sendiri.

And this clueless PM in his clueless National Reconciliation statement doesn’t even seem to have a clue as to what is going on among the grassroots.

The Tun in saying “Find out what they are not happy with and you will know what you should do” is certainly issuing a tall order.