In her very first paragraph, Jeswan already strikes the Pakatan standard note. She accuses: “Even in the face of a heartbreaking crisis, the Malaysian government could not let go of its insatiable hunger for politicking.”

Is Jeswan “just one” (Malaysian individual) who thinks and talks like that? Nope. The entire English media landscape of the country is dotted with Jeswans — legions of them.

Dr Mahathir blogged ‘The raw hatred for Proton‘ (a separate issue but we’re still taking about the same bunch of haters).

Is it only Proton for which ‘they’ have such a raw hatred or do they hate MAS as much too?

Who/what else is the object of their raw hatred?

The DCA? The PDRM? The TUDM?

Blogger Seademon believes that those who criticize incessantly are simply “bent on hitting out at any institution of His Majesty Yang DiPertuan Agong”.

Hannah Yeoh was asked about her contribution to the MH370 crisis, other than sitting in her Madame Speaker high chair and pontificating and posturing away — see tweet below. 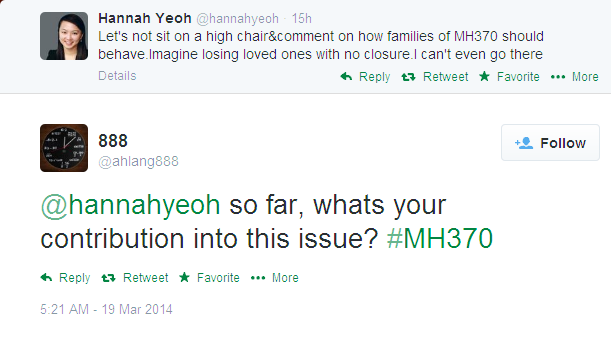 One worshipful Hannah fan named ‘Rajiv Jay Kumar’ quickly counters that the detractors, i.e. those who question the DAP Twitter star’s pontificating and posturing, are “dumbass cavemen” who spew “vitriol”.

It’s “unbelievable” to Rajiv that anyone would dare query Mama Dapster. If they do so, they must be “dumbass cavemen” and what they say can only be considered as “vitriol”.

Note: If you refuse to drink their Holy Water, your comments are “dumbass cavemen vitriol” which poor Saint Hannah of Jerusubang has to put up with.

Flashing a martyred smile emoticon, Hannah replies that she puts up with the “dumbass cavemen vitriol” in the name of “freedom of speech”.

Only sheeple will believe her. 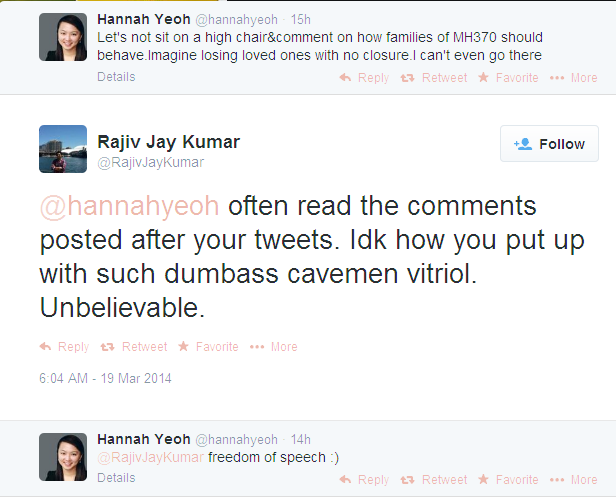