“Un peyar enna?“, I asked the elderly woman in wheelchair whom I met in the Jalan Duta court complex.

I’m not sure if my syntax was in the correct required courteous form for a younger person to address an older one but anyway the phrase is Tamil for “What is your name?”

“Kalaiyani,” she replied in a friendly manner and we chatted a bit.

The lady passed away a few weeks after that meeting.

At the funeral in Seremban, there were lots of flowers sent to her wake. I take it that she was well liked. Her youngest son was given the duty as chief mourner for the prayer ceremony. (I’m not sure; it could be an Indian thing – youngest son for mother’s rites, oldest son for father’s rites – or it could just be their personal family arrangement.)

Anyway, shortly after Madam Kalaiyani’s death, Waytha Moorthy resigned his position as a Deputy Minister in the Prime Minister’s Department.

In the twilight of her life, she and this son were for separated almost 5 years because he was living  in exile in the UK.

Her other son did not get the chance to visit her during her critical illness because the Kajang Prison reportedly refused to grant him leave. The last time Uthayakumar saw her was that day in court that I mentioned above.

She and this son were for separated 1-and-½ years because he was under ISA detention in Kamunting. And there was the perennial sword hanging over his head of being arrested at any time, and the ordeal of making countless appearances in court for his sedition hearings.

I asked Madam Kalaiyani’s other son – this fella is more low profile compared to his two famous brothers – what he thought of Waytha’s resignation. “You know what, I’m relieved,” he replied.

Chandra Sekaran explained that he was glad his family would no longer have to be indirectly associated with the BN.

I asked Madam Kalaiyani’s daughter what she thought of her brother quitting the PMO. Gowri said the decision had been expected for some time and she too was glad that he opted out.

As for Shanti (Mrs Waytha Moorthy), she had kept her distance from the Mak Datin social circuit of VIP wives. For the record, their daughter is in SRJK(T) and not in a posh private school (one of the many lies being spread to defame Hindraf). I know this for a fact because I’ve seen the girl in her dark blue pinafore with school badge.

Waytha’s detractors also told the story that he was whooping it up in Putrajaya, enjoying the perks of Ministerial office. That’s not true at all. This is a storyline really more applicable to the power- and publicity-crazy DAP evangelista YBs.

You can see that the greedy DAP carpetbaggers are glory- and gold seekers who abuse what little power they have managed to acquire like petty tyrants.

Case in point: Madam Speaker’s summary sacking of the food caterer who gave her a stomach ache. What a vindictive b…. ! In actual fact, all over the state, Selangorians are succumbing to food poisoning due to the severe water rationing.

“Higher threshold of pain and suffering”

Takemon blogger GR Kumar left a comment here in my blog, which to me, rather aptly describes the situation of the Tamil poor.

“The Indians may not be everybody’s cup of tea. A constituency of the bullied, the deprived, the marginalized if not by their own then by everyone from the BN to the opposition  they are the future to the balance of power in Malaysia unless one is blind.

“The Indians who are majority Tamils were brought to Malaysia from certain parts of Tamil Nadu (Madras then) by the British who realized that many of these were good workers who could be exploited because their socio religious conditioning imbued in them the belief they should suffer in this life to be reborn and escalated up the social ladder through suffering and pain.

“The Malays including Dr. Mahathir whom I adore in many respects, failed them. The fact remains though that in spite of their failures, they were never made to feel welcome in Malaysia. The Chinese who the Malays prefer because of their wealth and the fact that they assimilate more readily to advance their causes have now overridden the Malay position in Malaysia and that situation with the BN is rapidly deteriorating to a point only another May 13 will cure the Malay decline.

“But out of a position of ignorant arrogance they the BN continue like the DAP to believe the Tamils will sit by idly. It won’t happen. The Waythamurthis and MIC’s don’t control any group. The groups control them. They make them they break them. And if the Tamils are to be understood one merely has to look into their recent history. Regardless of how it ends, one merely has to look at the price Sri Lanka paid for that same careless attitude towards them.

“Malaysia has been caught up in that middle class trap where the vast majority now have the coveted lifestyle albeit at a cost they can ill afford. They want more. Very few analyse the position they are in and ask what are the consequences of this rapid transformation (socially and economically).

“Unless they court the middle ground the situation will turn ugly because whoever wins will win by a small margin which is really no win at all.

“The Tamils have a higher threshold of pain and suffering than any of the other groups who have been molly coddled by the economic prosperity of the country.” […]”

.
If you’ve ever heard the mournful Hindraf “theme song”, you might even say it sounds like a dirge.

They are – as GR Kumar aptly describes the lagging Tamils – the bullied, the deprived and the marginalized who have a higher threshold of pain and suffering than any of the other ethnic groups.

And on top of that, sudah jatuh ditimpa tangga. The Hindraf cause is a difficult, thankless and unrewarding (materially speaking) endeavour. Yet the leadership doggedly struggles on. The worst thing about their predicament is that there is a segment of the public which not only does not help but deliberately hinder. I’m talking about the Dapsters who keep slandering the Hindraf movement.

We’re aware of the gutter standard of DAP 3.0 politics and how they malign anybody who stands in the way of their march to Putrajaya. One of the worst victims of undeserved bad press is Waytha Moorthy, both from the Dapsters as well as Dapster Khairy.

Waytha got his law degree from Lincoln’s Inn and his wife hers from Gray’s Inn. With their prestigious legal qualifications, the couple could be running a lucrative commercial law practice instead of choosing to involve themselves in the Hindraf activism and be subjected to all kinds of unwarranted harassment.

The same could be said about Uthaya who is also a lawyer. At a press conference yesterday, Uthaya’s wife Indra Devi read out, to the reporters present, her husband’s latest letter written from jail.

Uthaya’s letter said: “I myself since April 16, (was) locked up for 14 days at the fully closed up (room) except (for) a small ventilation hole (in the) punishment cell – no reading and writing materials, towel and (having to) sleep on cement floor,” he said.

According to Indra, Uthaya attributed the punishment of solitary confinement to his constant complaints about the prison wardens whom he alleged would beat and torture the prisoners. It is public knowledge that alarming deaths are occurring in police custody. Likewise, prison is not a safe place and it is most unsafe for Uthaya.

Indra is pleading for Uthaya to be treated as a political prisoner rather than a common criminal. 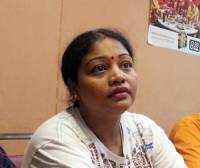 Uthaya is a political prisoner

“Kumar is a good man”. This is what his mother-in-law vouches. During one of our prison visits, I had sat beside her in the waiting room and we talked about her two dogs. She had volunteered the information to me and said that Uthaya doesn’t make any fussy demands on her but always accords her filial respect.

Uthaya has two step daughters. One is in college and the other one in her teens. The girls had unfortunately lost their biological father when they were very young. They see Uthaya as “Dad” and tell me that he treats them like they are his own flesh and blood.

This is a family that has been put through the wringer. You can imagine how difficult it is for Indra having to maintain her 9-to-5 job and at the same time raise her girls, look after her own elderly mother while constantly worrying about her husband’s health and safety.

Uthaya is in jail because he shone the harsh, glaring light of day on the abysmal plight of the abandoned Indians.

The Tamilians may possess a considerably higher threshold of pain and suffering but still the government should not allow him to continue to be treated this way. Uthaya’s imprisonment was one of the factors that made it difficult and conflicting for Waytha to remain in Najib’s cabinet.

Public pressure must be generated so that Uthaya is transferred out of the Death Row cell in which the prison authorities lock him up every now and again. Our system is surely better than this. If we want to call ourselves a Caring Society, we must do better.

It is a signal failure of government and an abandonment by society to leave P. Uthayakumar languishing in his present condition.

47 thoughts on “When bad things happen to good people”