The Hudud Bill being drafted by PAS for Parliament is splitting the country into two.

BELOW: “First Gerakan, now you too MCA?” 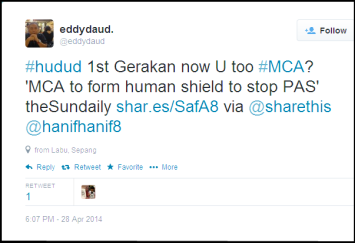 “So now we have it, the hudud opposition tripartite of DAP + Gerakan + MCA“, tweets blogger Eddy Daud (see below).

And there you have it, opposition to hudud from the Chinese parties collectively. Now showing in the cinema near you … after the DAP shit has hit the fan.

PAS is consistent, DAP the shit-stirrers

Ever since PAS was established in 1951, the Islamist party has been unwavering in its insistence on hudud.

Hence any hudud initiative – continually coming from PAS – is nothing new nor unexpected. It’s the same as what they’ve always been clamouring for over the past six decades.

BELOW: Nope, they’re not PAS politicians and not Umno politicians either. Drumroll … meet the DAP evangelista YBs

How did Umno reach this present pass?

For those delusional Dapsters who are buta sejarah, please read up on Gunung Semanggol and Madrasah Ehya Assharif.

The Umno president who is Bapa Kemerdekaan is famously known for enjoying a little flutter on the horses (i.e. betting at the races) and his drinks as well. Nobody’s talking about the Tunku’s afternoon Darjeeling tea, okay. Umno, for the past 60 years and more, has never pushed for hudud.

Even the Umno prez who was the fourth Prime Minister is still against the implementation of hudud. Isn’t it ironic that today Guan Eng and his hatchet men have to bank on their bete noir Dr Mahathir’s support to oppose hudud? See, the Iguana Eng’s press statement on 26 Apr 2014 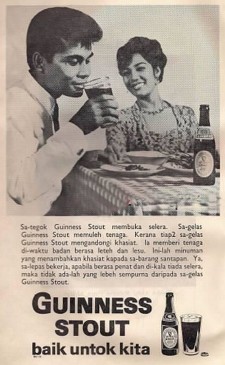 Under Umno’s watch and in the good ol’ days of black and white P. Ramlee movies, Malay girls with hourglass figures were featured in cabaret scenes.

All the wives of the Prime Ministers (concurrently the Umno presidents) did not wear tudung when their husbands were in office.

The Umno DNA is selambe aje.

DAP, on the other hand, inherited the most slick and conniving genes. Its parent party is the PAP, whose Lee Kuan Yew famously wore the songkok to fish Malay votes during his election campaign. Has anyone ever seen Lee in a songkok since then? 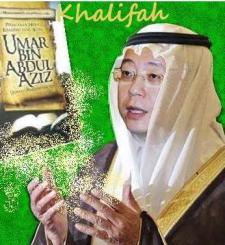 The bermuka-muka politics of the DAP

How did PAS eventually get to this step that the party is currently taking? Well, PAS is responding to overtures from Umno.

Why is Umno making overtures to PAS with greater urgency? Well, PAS’s 21 Muslim MPs are a more attractive proposition than MCA and Gerakan’s combined 8 Chinese MPs who, in any case, are occupying Malay-majority constituencies.

Why are PAS and Umno feeling so besieged? Well, how about the DAP 3.0’s gutter politics of tak habis-habis fitnah, hina, hasut, maki-hamun, putar-belit, tipu siang malam, asak tak henti-henti … how can any sane and decent people possibly cope with such perpetual hysteria?

PPTA-Umno simply has no answer to the Evangelista Bintang Lima. Do recall that the British needed to station 380,000 armed troops in Malaya in the early 1950s just to withstand the Bintang Tiga onslaught.

The lamentions below by MCA traces the hudud developments whereas the italicized comments within square brackets are inserted by this blogger.

The evangelista elements in the DAP have been too clever by half in playing political Islam. Their initial success bestowed upon them an overweaning hubris.

What you see happening is the operation of Newton’s Third Law of Motion: ‘For every action there is an equal and opposite reaction’. For the DAP action of deceitful, hate politics that overstepped all boundaries, we see the Umno reaction of fostering Malay-Muslim unity.

The DAP’s self-serving “Islamic” pretense and rank hypocrisy is blowing up in the face of the Chinese community. You lot are getting exactly what you voted for in GE13.

.
MCA trying to outdo the DAP

Please bear in mind that the majority of my blog readers are pro-establishment Malays. Therefore the results of the hudud poll (see above) would reflect the Umno-leaning sentiments.

Three-quarters of the poll respondents agree to Umno backing the hudud move. This figure of 75 percent is going to shoot up even further with the behaviour of the MCA and Gerakan that we’re witnessing.

The DAP’s evangelistas and their thuggish adjuncts everywhere (including in The J-Star) have decisively polarized Malaysia, and hudud is splitting combatants into Muslim vs Non-Muslim opposing camps.

MCA and Gerakan through their anti-hudud manoeuvres are sealing the deal.

73 thoughts on “Hudud: Muslims on one side, non-Muslims on the other”