Alifah Ting, just tell them “Salam 1Negara Islam back to all of you!”

The Yang Dipertua of Majlis Syura Isma, Ustaz Sharipudin Abdul Kadir, is on the warpath. You might be wondering What About? and Why?

Collected below are a cross-section of Malaysiakini reader comments hurled at the Isma youngster — a Chinese mualaf. The tone of the remarks reflects the trend of hostility directed at Muslim NGOs.

Alifah Ting Abdullah (above) is a member of Pembina which is the youth wing of Isma. Although she may not be exposed to the term “Evangelista Bintang Lima“, it is clear to us that she is the latest victim of their cyber lynch mob.

The Malaysian Firsters loudly proclaim that they are colour blind but their remarks betray a fanatical obsession with race.

Take these comments (screenshots below) from Malaysiakini readers

JomUbahUbah: “This racist and stupid Alifah Ting is barking shits without using her nut brain. Really disgrace all the Ting Families.”

All the comments on this page are sourced from the Malaysiakini article ‘I am Chinese, and I support Isma‘. Needless to say, the portal’s headline is like waving a red flag at an angry bull since Isma is their favourite punching bag.

Please note that the Malaysiakini subscriber “YF” (comments screenshot below) is a staunch Christian. His/her comments refer to Alifah.

YF: “These munafiks have a propensity to lie. The worst part is it is even allowed in their religion. That’s where all the problem starts.”

YF: “So she supports lying and racism? Are these the basic teachings of Islam? Go figure.”

If Ustaz Sharipudin thinks that “they” are “begitu biadab” when it comes to the Malays, then following this current Alifah episode, he’ll realise soon enough that they are even more vicious to those non-Malays who speak the national language fluently and have embraced/converted to the primary religion of the Nusantara.

The Firsters trumpet most vehemently that they transcend the divisions of religion as well as swear that they lovingly treat all who live in Malaysia as brothers and sisters.

The Firsters are mostly Christians of the evangelista strain. Malaysian First is the ideology that is being aggressively pushed by the Christian DAP.

BELOW: Madame Speaker is scolding the non-Firsters as “racists” 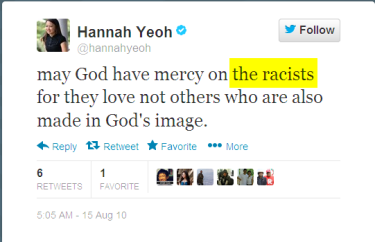 As you read the rest of this page, please remember that the DAP Christians have been publicly declaring their love for Islam and their warm, undying friendship for the Malay race.

KKCheong: “By the way, I think Alifah is not real person. I saw the Facebook page saying her job is tukang kutip sampah in ISMA. Normally this type of account is fake account.”

Speechless: “Alifah or whoever you really are, I suggest you study the Federal Constitution before you fire blanks. You not only look stupid and racist, you are also doing Islam a great injustice.”

Pemerhati: “This statement strongly indicates that Umno has prepared the statement for Alifa so as to help put its subsidiary organisation Isma in good light.”

Screenshots at bottom of page

Anonymous_1371490394: “cina muslim convert behaving like mamaks in penang. should be labeled CINAMAK”

CiViC: “Al*fah is neither Chinese of Malay, i only see some form resembling a four legged creature that barks at strangers but wags its tail when given leftover food.”

Apache “This bitch Alifah has sold her soul to ISMA for a few crumbs on the floor. Your parents have regretted giving birth to this bitch during child birth. Alifah, you are one of a few whores like Ridzuan T who would never hesitate to offer their daughters for a few cents in the bank.”

Anonymous #81405125 “bloody ting you might convert the so call best religeon for personal gain… or tangkap basah. your body blood is full of pork blood.. so he join a new organisation ,do sent mean you can change race,,, stupid,, don’t con-dame other race..you betrayed you own race.”

GrooTheWanderer: “Alifah you may be Chinese, but your children are not or would not be Chinese. So what race are you? If you support ISMA then you are a ‘han jian’ traitor. Chinese do not want you.”

Disgusted: “What else can you expect from a member of Isma’s youth wing Pembina, but to support her boss. Kachang lupakan kulit, like Ridhuan Tee Abdullah. Perhaps they are related.”

trublumalaysian: “ISMA – I’m (from a) Stupid Moronic Association. I pity you Alifah, for your brains has been deep-fried and Ridhuan Tee will be mighty pleased to have you as his pet chihuahua.”

wira: “Alifah. You chose to be a Malay (masuk Melayu). That is your democratic choice which no one can deny you. However, don’t slight other mainstream Chinese in this country who do not follow your choice because you are a “running bitch” if you do.”

champion of progresive: “Islam Social contract also means that minority rights are protected, my unlearened lost soul. ISMA the dickhead has undermined this very social contract!. We are Malayisans and we are a secular country! You think the non malaysa would have agreeed to independence if hudud is the law of land. My foot!!! Sheesh and mf ridhuan tee in making! half baked and raw as it comes. village fools!!!”

Continue-The-March: “This is the problem of Malaysia education system. It produces people of closed-mind with limited access to information (due to limited language skill) and ability to analysis and think. They become bigots and stupid.”
.

49 thoughts on “Natrah 2.0: Feel the LOVE showered on Isma girl”