.
The opinion survey above was uploaded on my blog a few days ago on Wednesday (May 21). The question asked is: “Do you feel under siege by the DAP?”

There have been more than 500 respondents. Some 80 percent answered ‘Yes’.

This translates into 4 out of every 5 (i.e. 408 out of 508) readers polled thus far who say that they are feeling under siege by the DAP.

Umno is the biggest party in Parliament – see pie chart below – but yet permits the DAP to terrorize us.

Why is Umno sleeping when we, the BN voters, are being besieged?

It is because the Umno top leadership is weak that the elements of anarchy are beginning to take the law into their own hands.

All this is happening only after too much provocation and too many insults heaped on the pro-establishment people for way too long, without the Najib administration showing any political will to rein in the opposition extremists. 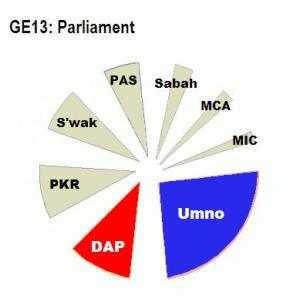 There is something wrong with Umno which allows the DAP to get away with its Orwellian black arts that succeeds in hoodwinking the “popular vote” into believing Pakatan is “peace-loving”, konon.

Rather than “meek and mild” as they like portray themselves, they’re really way too slippery and very aggressive. Their savagery is crystal clear to discerning eyes.

And there is something terribly wrong with Umno for allowing the DAP full impunity to successfully peddle the hogwash that the party is spreading LOVE all around when they’re in reality sowing hatred and poisoning roots.

Umno is simply giving the opposition a walkover.

If this were not so, the online poll below would not reveal so many people feeling besieged by the DAP.

.
No Action, Talk Only

Najib Razak said that he would sue Malaysiakini for libel but it’s been all quiet on the PMO front.

Why, pray tell, the deafening silence on the intended lawsuit after his 48-hour ultimatum issued Malaysiakini for an apology is long past?

[Nope, Malaysiakini did not apologize. Just like Rayer too refuses to apologize as well.]

If the PM is unable to assuage the disquiet of his BN core supporters, then suffice to say the BN vote bank will soon turn away from Umno and turn to other groups that are willing to show spine and leadership.

NOTE: Like our previous polls, this one will run its course over a week and is still open for you to register your vote

Najib to the right, Nazir to the left