Klang MP Charles Santiago said Selangor has not provided “a shred of evidence” to counter studies that showed disused mining pool water, soon to be pumped again into Sungai Selangor and Sungai Tinggi, contained a high level of heavy metals, according to a Malay Mail report today.

These traces of heavy metals cannot be removed from the water because our treatment plants are not equipped to do the job, added Santiago.

He further highlighted Universiti Malaya’s research by its Chemistry and Geology departments that involved 15 sampling stations which pointed to contamination in the Bestari Jaya pond in Kuala Selangor.

Contaminated water sourced from disused tin mining pools has the potential to cause cancer and other dangerous disorders if consumed.

Do not let the Gunting dalam Lipatan continue to cover this up just to protect Pakatan’s fat arse. From now on, The Scissors must be considered a weapon ready to stab the BN lethally in the back at any opportune moment.

The Scissorati, like the ABU-ers, want to see the Parti Paling Tidak Apa dead and buried. BN will not be able to hold on to Putrajaya unless it is able to take back Selangor – the richest and most powerful state. 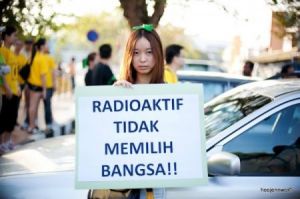 There is something very wrong with DAP supporters.

They went criminally insane over Lynas as well as the purported danger posed by ore mining operations in Raub. But they do not mind drinking water laced with dangerous heavy metals which can lead to life-threatening ailments.

These Dapsters are impossible to reason with.

No hope. No cure.

Wake up BN and “save Selangor” for the sane people!