The flag of jihad was flown yesterday in Putrajaya when the Federal Court was delivering its ‘Allah’-Herald judgment.

But first, a quick tour around the rest of the Muslim world. 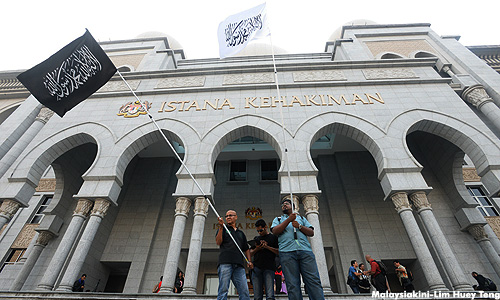 “The number of those in need of humanitarian aid in Yemen has reached 14.7 million Yemenis, according to the United Nations.” – Column by Farea al-Muslimi (Al-Monitor, today 24 June 2014)

Humanitarian organisations fear a looming food crisis will cause Somalis to again starve to death. The last Somalian famine in 2011 killed more than a quarter of a million people. (Reuters, 23 June 2014)

“Pre-failed state”, Christian south broke away from the Muslim north and became a new, independent country in July 2011. “With war, famine, disease, and death consuming the country, South Sudan is nearing its breaking point.”

“People are now so divided and so determined to destroy each other, the brutality of the violence has been so extreme.” (Business Insider, 23 June 2014)

‘Muslims will soon be given a bloodbath in Central African Republic’

Chinese complain that they are second class citizens and Christians whinge they are an oppressed and persecuted minority.

“Malaysia is a multi-faith country and it is important that we manage our differences peacefully, in accordance with the rule of law and through dialogue, mutual respect and compromise.” – source

Yeo Bee Yin has released a press statement on the Allah issue. She said, “Congrats to Allah’s soldiers“.

“This must be a happy time for those of you who think you have won a war for Allah.

“First of all, I would like to congratulate Perkasa and other NGOs who have screamed, shouted, and threatened Malaysians who disagreed that Allah should be exclusive to Muslims. Congratulations! You have won your holy war. Go celebrate.

“Second, I would like to congratulate the four judges who dismissed the Catholic church’s application for leave to appeal against a decision upholding the government ban against its use of ‘Allah’ as a reference to God. If you made this judgement to protect your own religion, congratulations for sacrificing your professionalism.

“Third, I would like to congratulate the Home Ministry, for it was you that filed an appeal against the High Court ruling that the Herald can call on Allah.

“Fourth, I would like to congratulate Umno, for you have been successful in engineering the war over Allah to distract Malaysian Muslims from the rising cost of living, your corrupt practices and your inability to govern and lead. Oh, Umno, you are such a political genius.

“Fifth, I would like to congratulate the Christians in Sabah and Sarawak, for you can now see the true colours of the organisation that you’ve so enthusiastically supported for the past 50 over years.

“As for me, call me whatever, catch me if you like, charge me if you can, I will continue to believe and stand on the principle that everyone in this country is given by the Federal Constitution the liberty to practise his or her own religion and to express himself or herself. By the principle of natural justice and liberty, Allah should never be exclusive to any particular group of people.

“To my fellow Malaysians who are Bahasa Malaysia speaking Christians, remember this: They may take ‘Allah’ away from the Herald, but they can never take God away from your heart. Be strong and courageous, continue to love and pray for them who persecute you for they know not what they are doing.

BELOW: DAP going all out in agitating the Sabah and Sarawak Christians

Blogger Din Turtle gives his take on the Malaysian Insider editorial on the ‘Allah’ verdict handed yesterday by the Federal Court as well as the 10-point solution.

TMI claims “The 10-point resolution is dead and buried by Jais, Mais, Perkasa, Isma and the protector of all these groups, Umno”.

But it is not the evangelistas who lack confidence in Najib Razak. The Muslims surely can’t be placing too much confidence in the PM either now, given how his overtures to the Christians have been met with nothing but belligerence.

Dr M also said gomen supporters feel betrayed and angry with the gomen (read: Najib) which they regard as weak for bowing again and again to the opposition’s outrageous demands … True.

Dr M predicts that gomen supporters will withdraw their support from the BN if the administration (read: Najib) fails to learn its lesson.

43 thoughts on “What will happen if Najib fails to heed the Tun’s advice?”