J-Star CEO Wong Chun Wai is pouring scorn on certain “groups” for their caution against a repeat of May 13. But he doesn’t name these groups.

Earlier Chun Wai was insolent enough to refer to Zainuddin Maidin, our Tokoh Wartawan Negara 2006, as “a blogger” without the courtesy of naming the Tan Sri.

When Chun Wai wrote about “a pro-Barisan blogger who has dedicated herself to bashing The Star on a daily basis”, he omitted to mention her name as well but you all know who he meant, right?

“It is ironic that while The Star has been accused of being pro-Barisan by DAP, there is a pro-Barisan blogger who has dedicated herself to bashing The Star on a daily basis as she counts the number of DAP news items and pictures that appear in this newspaper!”

In his column today, Chun Wai derides “some recent groups whose handful of members, if there are any” for what he claims is their overplay of the May 13 old and obsolete tune.

He abstains however from naming this group that he alleges to have merely a handful of members but likes to use May 13 as “a threat”.

But we know he is most likely alluding to Isma.

BELOW: You can hardly see Malay faces in the J-Star photo illustrating Chun Wai’s column today

ABOVE: Note that Chun Wai’s article highlighted the phrase “used as a THREAT”

Why Isma is the prime suspect

Even though Chun Wai is sly – or cowardly – enough to not finger a name to the “recent group” he’s unhappy with (that issued the “Beware May 13” warning), we can nonetheless put two and two together.

Previously, Chun Wai had dissed Isma as resorting to THREATS due to an inability to articulate.

“So we have the likes of people like the Muslim activist group Ikatan Muslimin Malaysia (Isma) chief Abdullah Zaik Abdul Rahman taking this line of argument further. In his inability to articulate his views convincingly and fairly, he has resorted to threats.” – ‘Our right to speak up‘ (The J-Star, 11 May 2014)

“Ignorant fools and bigots like him [Abdullah Zaik] should not be allowed to get away with their remarks. If the authorities choose to look the other way, it is as good as telling many of us that such people are tolerated or, worse, even endorsed by them.

“Wrong is wrong, and we are glad that former Prime Minister Tun Dr Mahathir Mohamad has the courage to tell Abdullah Zaik off.”

Tun told off Isma because he is one who’s ever willing to call a spade a spade. Perkasa, the movement patronized by him, is a straight-talking outfit, as is Isma.

It is the evangelical Christians such as Chun Wai who operate in a sly and sneaky manner.

In his column piece titled ‘Slipping into our racial cocoons‘, the object of Chun Wai’s ire was again Isma president Abdullah Zaik for the latter’s “Cina penceroboh” remark.

In the same 18 May 2014 article, Chun Wai took to task the “extremists” which to him are the NGOs dictating religious correctness. He wrote:

“These instant NGOs, with a membership of five persons, including the wives and children of the presidents, will claim that they represent a particular race or religion.”

In saying that the NGO membership of five persons includes the wives and children of the president, Chun Wai is mocking Abdullah Zaik who has nine children and whose wife Nor Saleha Mohd Salleh is chief of the Isma women’s wing.

Further down the page, Chun Wai adds, “And Abdullah Zaik’s Isma is supposed to represent Muslims”. The dots are connected after the interval of a few sentences.

This theme of instant NGOs – Muslim of course – with only a handful of family members is a leitmotif that runs through Chun Wai’s writings like how “ultra kiasu” permeates Ridhuan Tee’s.

The Sneaky Star way of sniding

Last week, Chun Wai had whinged that the Christians who number “among the smallest of the minority religious groups” are being victimized because they are “easy targets”.

He wrote: “Christian-bashing has become fashionable in Malaysia, especially among some politicians, retired politicians, writers and some one-man-show non-governmental organisations”.

Once more is Chun Wai sinking his teeth into the Muslim NGOs.

Although Chun Wai took a snide shot at the “one-man-show” NGOs, he cowardly refrained from naming the organisations.

A fortnight ago in his 29 June 2014 article on the Herald-‘Allah’ Federal Court judgment, Chun Wai similarly griped that “[s]ome groups seem to get away with just about anything while action is promptly taken against other groups or individuals”.

The following passage is excerpted from Chun Wai’s 25 May 2014 column.

“part of democracy … if we want different opinions to be heard, including outlandish ones by the most colourful of characters, we cannot shut them down. But moderate Malaysians must also stand up and speak their minds. Many of us cherish the moderate, liberal, secular and plural ways …”

The J-Star writers constantly make a variety of snide remarks against Muslim NGOs but they have nothing negative to say about the Bersih 4.0/Negaraku NGOs – some of which only have a “handful of members” too.

Chun Wai counts himself among those who “cherish the moderate, liberal, secular and plural ways”. His paper is demonizing those they see as not liberal and not secular.

MCA is complicit in all that its media is doing. Umno, as usual, is PPTA. 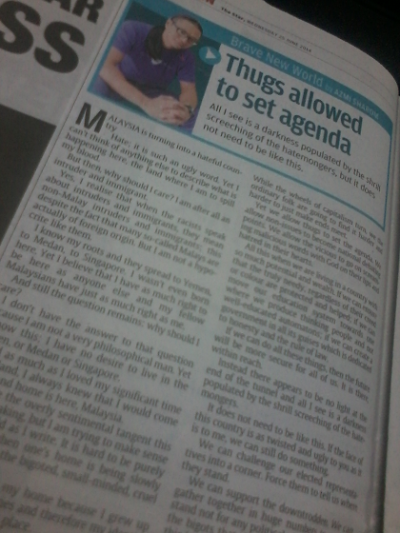