What if Kiki Steering Lock was a Chinese?

Former Utusan group editor Zainuddin Maidin asks what would then be the reaction of the Chinese newspapers, the Chinese social media, the Chinese communal parties and the Chinese NGOs? Would they consider the stiff penalty meted out to Kiki by the court as being too harsh and motivated by the race factor, and would they at the same time see her offence as a “small matter only”? 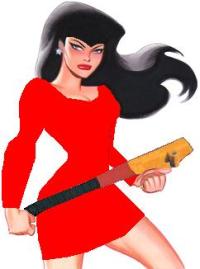 .
To forestall any possibility of Dapster trolls deliberately misrepresenting my views – something they’re hellbent on most adroitly doing under the guise of ‘Anons’ all over blogosphere – allow me to state for the record that I believe a strong, deterrent punishment is necessary for her.

Below are my views presently on how the Chinese would react if Kiki were the same skin colour.

Well, look at how they reacted to Yuki who said that Malaysia is a scary, rotten country in the wake of the MH17 downing.

They made all kinds of creative excuses for her. Yuki clearly wrote “rotten COUNTRY” ( 烂国家 ) in her Facebook but the Dapster defenders bluffed gullible Malays – who are willing to bersangka baik – by re-interpreting what Yuki wrote to refer to the rotten Umno administration.

Substituting Umno for “country”, the Dapsters went on to spin that what Yuki complained was correct after all as the misgovernance by Umno is something rotten.

Spinning is second nature to the Dapster-evangelistas. They could even stretch it that the Alvivi couple were inviting Muslims to buka puasa with halal “organic vegetarian” Bah Kut Teh.

What kind of sick people are they?

In the first photo, Alvin and Vivian are holding a poster that says they support the PM 100 percent while in the second photo, Vivian is displaying the BN logo on a flag.

Do you for a minute believe that Alvivi support the Najib administration and the ruling coalition? Yet that is why the photos overtly indicate. And there you have the bermuka-muka behaviour of the Chinese.

Their language of Christian Love-Love-Love pounds our ears. Honeyed words about “unity” and “harmony” drip from their sugar-coated tongue and gather in a pool of saliva (kalau cakap Melayu, menjual air liur). 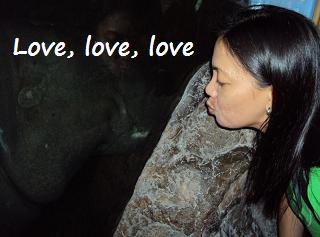 Two Malaysiakini ‘Yoursay’ articles yesterday featured close to 20 of the portal’s reader comments taking potshots at Zainuddin Maidin for posing the “what if Kiki was Chinese” question.

See, ‘Country in grip of the extreme right-wing‘ and ‘Look who’s stirring the racial pot‘.

They have omitted to mention that the opposition is in the grip of the Christian extremists.

One Malaysiakini commenter said, “Your question is really stupid, it just showed the person you [Tan Sri Zam] are – a racist, an idiot, and a person who has no common sense”.

Now that’s a very typical Dapster response — to label someone they don’t agree with “a racist” and “an idiot”.

The attacks on Zam in Malaysiakini ran along the, by now quite predictable and tiresome, lines of Firster posturing, e.g.

“a sad day for our nation that former national leaders can only think in racial terms”, “everything is about race and religion, that’s what Umno has been trying to instill”, “racist Umno sees everything in terms of race”, “Umno leaders love to play hypothetical games to instigate racial and religious hatred”.

Minorities ungrateful for “not being ethnically cleansed”

Lately the attacks on someone perceived to be an Umno establishment figure or the ‘Ketuanan Melayu’ proponents such as Perkasa and Isma have escalated into dangerous territory, e.g. the taunt by a Malaysiakini subscriber calling himself ‘Joker‘ who said that if the road bully was a Chinese, the person would have had to “pay a fine of RM50,000 and be whipped”.

Another Malaysiakini commenter Hplooi wrote that “the extreme right wing … cabal is essentially puzzled as to why the minorities (a significant minority in case you care to note) are not grateful for not being ethnically cleansed”.

The allusion to ethnic cleansing was not, I’d suppose, done in all seriousness but more of a jeer.

Nonetheless the jeering mindset behind such over-the-top mockery reveals just how much of a manipulative facade all the exploitative talk about “Love”, “Harmony” and “Unity” by the Firsters really is.