Can Malay power prevail in a multiracial state?

Yup. That’s how it has been in Perak over the last half decade.

An all-Malay ruling coalition in S’gor coming up

It’s entirely possible that an identical scenario will soon be replicated in Selangor.

I’d like the Chinese to realise that the DAP evangelistas bear a lot of responsibility for this situation unfolding. Please remember to thank the party that 90 percent of you people so ardently support.

Now let’s examine the scenario of PAS hooking up with Umno in Selangor.

Rocket to the moon has crashlanded

DAP has brought up the matter of PAS benefiting from the unprecedented support in GE13 given it by opposition supporters loyal to Pakatan (read: Chinese voters).

In his press statement taking PAS to task, DAP national organizing secretary Anthony Loke (pix, left) said the proposal by some quarters in PAS to team up with Umno to form a new Selangor state government is a betrayal not only of the DAP but also of the rakyat that gave PAS its mandate.

Referring to the leaked WhatsApp message between PAS central committee members, Loke reminded PAS research centre operations director Dr Zuhdi Marzuki that the seats gained by his Islamist party in Selangor were won by PAS under the Pakatan umbrella.

As such, Loke added, the party should adopt a more open and tolerant attitude in keeping with their rebranding slogan ‘PAS for all’.

PAS has 8 DUN seats in Selangor which were won with a majority of less than 5,000 votes – see table above.

In all these 8 seats, PAS had contested against Umno.

Umno had held all eight in 2004 (GE11). In the election before that (GE10 in 1999), Umno held all of the seats too – Sabak, Sijangkang, Morib, Dusun Tua, Selat Klang and Gombak Setia – with the exception of Hulu Kelang which was won by PKR’s Azmin Ali.

Note: In 1999, the seat of Tanjung Sepat was not as yet created. When GE10 was held, there were only 48 state seats in Selangor. The Selangor DUN was expanded to 56 seats for GE11. 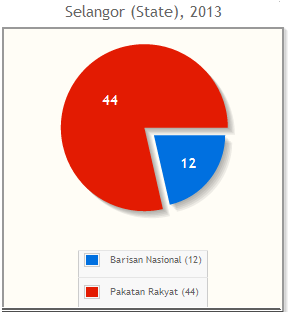 By GE12, Umno had conceded half of those 8 seats to PAS. The 4 seats lost by Umno in 2008 were Selat Klang, Sijangkang, Hulu Kelang and Gombak Setia, the last mentioned captured by the then PAS Selangor commissioner Hassan Ali.

In GE13, PAS made additional gains of Dusun Tua, Tanjung Sepat, Morib and Sabak. It is fair to say that PAS gained these seats on account of the strong ABU sentiment among the Chinese electorate.

BELOW: A piece of trivia, the Selat Klang Umno Adun in 1999 was Zakaria Md Deros who gained notoriety from the opulence of his ‘Istana Zakaria’ in Pandamaran that cost way above his visible means of income (i.e. salary earned as an Adun). The mahligai has 21 bathrooms, including with jacuzzi.

Anything but Umno (ABU) worked to PAS’s advantage

PAS benefited from the ABU sentiment because the seats that they contested were against Umno.

Dusun Tua, the Selangor DUN seat newly gained by PAS in 2013, has 37.4 percent Chinese voters and this tsunamic factor allowed PAS to sail to a fairly comfortable victory.

Other Selangor seats which went – for the first time ever – to PAS in the last general election have also a sizeable number of Chinese voters. Tanjung Sepat (28.1% Chinese voters) and Morib (21.8%) were both won with a slim majority of 682 votes and 766 votes respectively. It’s quite safe to say that had it not been for the ABU fanaticism, these two seats would not have gone PAS’s way. Morib was after all Umno’s in 2008, 2004 and 1999.

Another PAS seat which is of interest in reflecting the ABU onslaught is Selat Klang where a quarter of the electorate are Chinese. Halimah Ali wrested this seat, which has a little over 10 percent Indian voters, on the back of the Makkal Sakti wave in 2008 and successfully retained it in 2013.

Halimah had won Selat Klang with a majority of 1,459 votes in GE12 but doubled her majority to 2,754 votes in GE13. In 2008, the voter turnout was 75.4 percent but shot up to 86.4 percent in 2013. You may recall that the Chinese voters had eagerly made their way to the polling stations early in the morning and lined up in queues snaking two miles long just to “Ubah” – kick Umno out of Putrajaya – “ini kali lah”.

The facts of the PAS success last election do point to the DAP’s stupendous efforts in galvanizing the Chinese to “rise up” and take four-fifths of Selangor for Pakatan (and Jesus too). 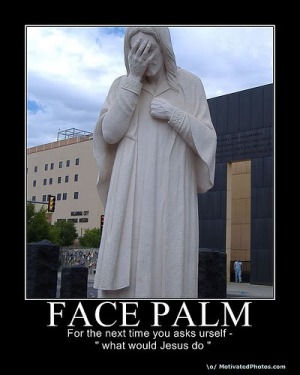 What if PAS and Umno are on the same side?

If PAS decide to combine their strength with Umno, the game will change needless to say.

The magic number to win the match is 29 for a simple majority in the House. At the moment, the two Malay/Muslim parties together have 27.

The rest of the BN satellites – MCA, MIC, Gerakan and PPP – are irrelevant. None of them managed to win a single seat in Selangor the last election.

How will an Umno-PAS combo take to the field?

Malay power can be formidable when united, as proven in Perak. And mind you, Umno pulled through in Perak all on their own steam.

Given the circumstances, it looks like PKR will step into the breach. We can expect PKR candidates to be fielded in the 12 Selangor DUNs currently held by Umno and the 15 DUNs held by PAS, unless the DAP decides to muscle in on some of the seats that are more racially mixed.

BELOW: Petaling — the epicentre of Greater Jerusubang 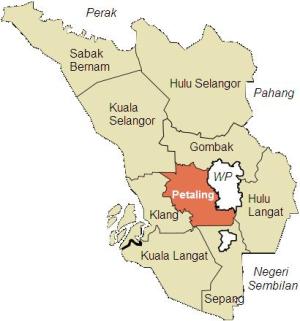 How will Umno and PAS fare with the realignment?

The most reasonable assumption is that PAS will re-balance through losing non-Malay support but conversely recovering Malay support.

With Umno on the other hand, there is no further non-Malay support left for them to lose. Umno cannot be any more unpopular among the Chinese and the Indians than they are now. At the same time however, Umno will increase its Malay support with the vote swing by the PAS supporters shifting in favour of their new ally (Umno).

DAP will maintain status quo while MCA will continue its losing streak.

PKR will be the party whose fortunes are most tested.

BELOW: Nik Nazmi and Khalid Ibrahim having the last laugh

Who will duke it out with who?

The following seats will pose the main challenges for Umno:

All four of the Aduns are PKR reps in Selangor who won in GE13 with a majority of less than 5,000 votes.

The concentration of Malay voters in their DUNs are:

One seat … just one more seat, and Umno is set

Batu Tiga has got only 12.4 percent Chinese voters and hence PKR cannot do any better among the non-Malay electorate than it already did in GE13. There is a good chance of Umno unseating Rodziah in Shah Alam’s Batu Tiga in a re-election based on the optimistic assumption that a portion of the Malay votes will shift to Umno.

According to the vote swing calculus, Umno might possibly win in Batu Tiga by a wafer thin margin. Like in Teluk Intan lah.

The majority of 3,805 votes obtained by Rodziah in Batu Tiga in GE13 can be overturned if 2,000 voters were to shift allegiance to Umno, which in any case had previously won the seat in 1999 and 2004.

It is not improbable for Umno to successfully pull off a ‘Malay Power’ coup in Selangor like they did before in Perak. Umno just has to snatch a couple more seats, that’s all.

Part I: Rise up and take back S’gor for the ummah

The above is Part III

Part IV: Malays can rule on their own without sharing power with Chinese

5 thoughts on “Going for broke in S’gor, comparison with Perak’s Malay power”