One year ago this month, Perkasa Youth chief Irwan Fahmi Ideris called on Najib Razak to resign for our PM’s abysmal failure to govern – see screenshot below.

Irwan recalls in his blog on Tuesday that he and the Perkasa central leadership numbering 10 persons provided their feedback to the PM in a closed door session immediately following GE13.

They pointed out that not only had Najib failed to persuade the Chinese to vote BN but the fact is that the voter turnout among the Chinese community was the highest at 87 percent, out of which only a mere 5 percent of Chinese support went to the ruling party (according to Perkasa’s analysis).
.

Najib making only the DAP happy

According to Irwan, the Najib administration has “already pawned a lot” (of the national security safeguards, for example ISA). And the PM still keeps on making decisions which do not profit the majority (race) whom voted for the BN.

Has Dato Seri Najib not learned from his mistake of abolishing the ISA, asked Irwan in relation to how the Sedition Act is at present similarly facing the axe. As a result of the ISA’s removal, many today have been emboldened to insult religion (of Islam) and the rulers, the Perkasa Youth chief added.

Irwan feels that by doing away with the Sedition Act, there is nothing left to stop the agitators from continually inciting the public. He believes that repealing the Sedition Act is an unwise decision which will be detrimental to the Malays and the Muslims.

Najib not cut out to confront streetfighters who use knuckle dusters

“His peers in politics say that Najib’s strength and weakness is that he is a ‘nice guy’. He comes from an upper crust background, he went to boarding school in England and those who work with him say that he is never rude even when angry. He is basically a well brought boy who became a polished gentleman.

“Najib’s misfortune is that the current political landscape is dominated by loud and confrontational street-fighters. As such, the gentlemen types are bound to come across as somewhat soft and laidback.”

Najib’s virtue of being a gentleman is at the same time the Achilles Heel for Umno. This is primarily because his opponents are, as Joceline Tan says, the “loud and confrontational street-fighters” who yet dare to point their finger at other people as “low class”, “racist” and “wicked”.

BELOW: The bajungu are Guan Eng’s purple shirts 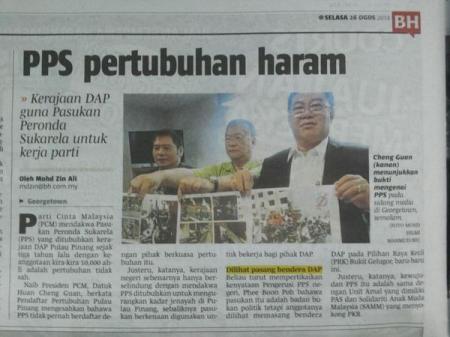 Tunku Abdul Rahman was unpopular among the Malays in 1969 because he was seen as overly pandering to the Chinese.

The mockery, scorn and insults hurled at the Malays today are reminiscent of the outpouring that preceded the month of May that year.

In 1969, Dr Mahathir Mohamad was the Young Turk who wrote the ‘scandalous’ letter against Tunku. Likewise Irwan’s present-day call for the resignation of the PM is equally scandalous.

Let’s examine how Dr M described that fateful year. According to The Malay Dilemma (Marshall Cavendish edition, reprinted 2009),  Tunku’s government “was apparently oblivious to what went on around it”.

Tun continues in The Malay Dilemma, “Secure in its absolute majority in Parliament, it was openly contemptuous of criticism. Policies were made which completely ignored public opinion”. 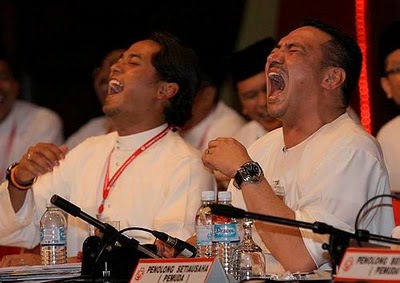 Tun also wrote in The Malay Dilemma that “independent Malaya chose to treat membership of the Cabinet as a reward for loyalty to party chiefs and acceptability to the Prime Minister. […] The result was that mediocre men were left to run the country”.

“The people became cynical and respect for the Ministers was minimal. This feeling did not merely pervade those who were opposed to the Government but also those who supported the Government,” Tun had written of the 1969 period.

Yup, look at Najib’s two most favourite Ministers above. 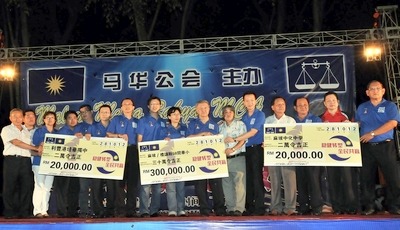 The Alliance’s “lackadaisical attitudes” mentioned by Tun sounds a lot like my complaint about the Parti Paling Tidak Apa.

Recounting the 10 May 1969 general election, Tun wrote in The Malay Dilemma: “Until just before and during election, the Ministers were kept busy handing out cheques. The recipients of this largesse made a great show of gratitude, but it was apparent to those who cared to observe that their sympathy was not automatically with the Government”.

According to Tun (The Malay Dilemma): “The Chinese demands [in 1969] increased as the Government concessions whetted their appetite. At first, the Chinese moderates thought that the demands of the chauvinists were useful to keep the Malays in check, but soon the moderates became victims of their own strategy.”

Summing up “what went wrong” in 1969, Tun wrote: “… the Government, glorying in its massive strength, became contemptuous of criticisms directed at it either by the opposition or by its own supporters. The gulf between the Government and the people widened so that the Government was no longer able to feel the pulse of the people or interpret it correctly”.

BELOW: Pity Najib if he is conned into believing the ‘I love PM’ banners

Half a lifetime and coming a full circle

Is it very smart of Najib Razak to keep around him a whole gravy train of con-sultants who feed him with sugar cubes?

The Doctor felt the pulse of the people and interpreted it correctly in 1969. And he wrote that open letter addressed to Tunku 45 years ago.

Today Dr Mahathir is touching 90. Once again, the always-a-physician is reading the mood of the people and interpreting it correctly. And hence his open criticism (‘Menegur’) in his blog posting directed at Najib.

Najib Razak is indeed being surrounded and insulated by a wall of self-serving sycophants, exactly like Dr M alludes to in his King Canute and Naked Emperor analogies.

Najib is also detached from the Malay ground and divorced from the Umno grassroots. These are the BN core supporters.

True, Najib is unassailable in Umno due to the strong patronage network and in government too due to his people filling the key positions. But while Najib can’t be shaken from his perch in the Umno hierarchy and likewise his premiership is similarly secure from internal challenge, the position of the BN on the electoral landscape is however not so.

The Perkasa people had a meeting with Najib but it was like talking to a brick wall.

The Isma people had a meeting with Najib but it was like talking to a brick wall.

Even though Tun is some 30 years older than Najib, he has much better hearing than the PM. Najib does not have ears to listen and so he is going to remain in his world of disconnect. And Malaysia shall pay the consequences.

26 thoughts on “What Perkasa thinks about Najib”