The Penang chief minister has rallied to the defence of his bajungu by declaring that thanks to the Purple Shirts patrol, his state is the safest in Malaysia.

In a press statement today, Lim Guan Eng confers on Penang the unofficial status of “safest”.

His claim is highly suspect. In fact and to the contrary, Penang is the ethnic hotspot where conflict is most likely to erupt into sectarian violence.

BELOW: This bajungu unit looks all Chinese

The Chinese in Penang have veered too far from the national mainstream. It is due to this very reason, i.e. Penang Chinese choosing to run along their own separate side stream, that the

bajungu took on a life of its own and bourgeoned to almost 10,000 members.

Believing their own propaganda is a big problem. Pakatan had been crowing how they won 52 percent of the popular vote against the BN’s 47 percent. It took Najib Razak 214 days to finally come up with a counter argument.

On 5 Dec 2013 – which was seven months (!) after the conclusion of GE13 – Najib told the Umno general assembly at PWTC that Pakatan was really only more popular among KL-ites, Selangorians, Kelantanese and Penangites. 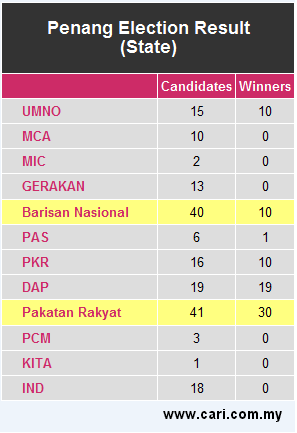 If you’ll look at the Penang DUN results table above, you can see that MCA, Gerakan and MIC scored three eggs (big, fat zeroes) in GE13. Collectively the three BN satellite parties contested altogether 25 seats and lost every single one of them.

Their total wipeout reflects the anti-establishment sentiment prevalent among the non-Malays in Penang.

Head-to-head in Penang the last general election, Pakatan received 621,706 votes against 498,656 votes collected by the BN for the 40 state seats. Needless to say, support for Pakatan is overwhelming in Penang at 55.5 percent compared with the rest of the country (52%).

There is a major difference between the Pakatan-BN schism in Penang compared to the electoral split in fellow opposition state Kelantan.

In Kelantan, the election was fought between PAS and Umno, and the electorate was PAS Malays vs Umno Malays. In Penang, the battle was between DAP and Umno, and between Chinese and Indians vs Malays.

You must remember that the BN’s Penang seats were delivered solely by Umno, meaning Malay voters. PAS won only one seat in the 40-seat Penang state assembly. You can interpret this to mean that support for Pakatan among Penang Malays is weak.

The PAS-Malay vs Umno-Malay situation in Kelantan poses no danger whereas the ethnic divide is clear-cut and deep in Penang, and made worse by the Christian evangelism that has taken hold there.

BELOW: Who is Najib try to kid? 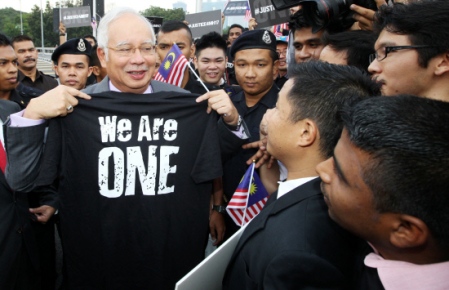 In his recent Merdeka Day speech, the PM was still chasing his 1Malaysia rainbow.

The irony did not escape the opposition either that the police swoop on the bajungu had commenced on National Day. .

Please note the yellow highlight in the Malaysiakini article above:

A subscriber going by the Indian name “Vijay” revealed that he attended church on Merdeka morning (which so happens fell on a Sunday this year). From their name alone, it does not cross your mind that they are Christian and thus you tend to under-estimate the evangelista presence and influence.

There are really a lot of Christians whose numbers were yet to be accurately reflected in the last decennial census of the Malaysian population in 2010 but will surely show up in the next census in 2020.

Twitter account Star Editor’s Choice had tweeted “1Msia for Utusan to print outrageous lies” (see archival screenshot above) which was later mirrored by Hannah Yeoh who tweeted “What kind of 1Malaysia Prime Minister we have in @NajibRazak when he allows Utusan Malaysia to sell lies daily?”

We’re aware with how much hostility the DAP and their supporters treat Utusan – see @hannahyeoh tweets collection below.

Yet Umno and its supporters are willing to allow Najib Razak to ignore the 800lb gorilla in the room which is the Christian paper J-Star. 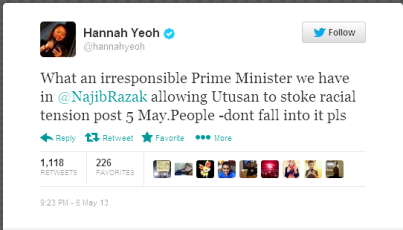 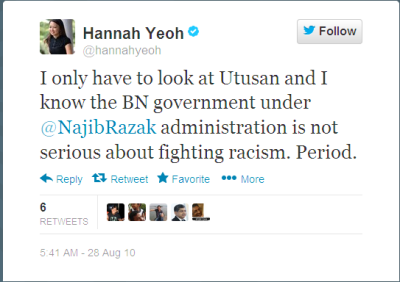 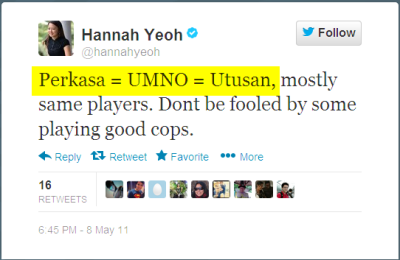 The J-Star was born in Penang.

The paper grew up in Penang.

BELOW: The Christening ceremony for Penang island in 1786

Penangites think their state was founded by an orang putih – Sir Francis Light.

Penang is the only state in the peninsula that is not a Malay state.

Penang is the only state in the whole country to have a non-Malay chief executive. All the other 12 Menteri Besar and Ketua Menteri are Malay.

BELOW: Historical painting of the Union Jack flying at the Penang jetty 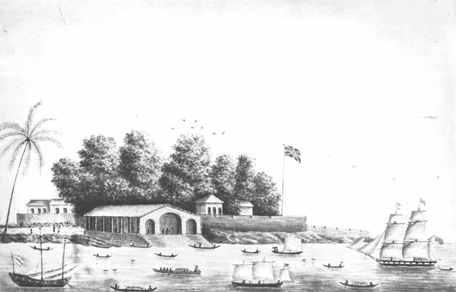 J-Star newsroom is Nest of Evangelistas

The Chinese tsunami could not have happened without the collusion of the MCA.

DAP could not have won the propaganda war without the tacit cooperation of the MCA media.

When Hannah Yeoh was appointed Selangor Speaker, The J-Star‘s ecstatic editors tweeted the ‘glad tidings’ 10 times within the short span of 24 hours.

Everybody knows that MCA has already transferred lock, stock and barrel its Chinese vote share to the DAP.

Meanwhile the MCA media can now be seen trying subtly to move the non-Chinese sympathy to the DAP camp.

Come GE14, the MCA will be dead so there is nothing left for MCA to lose now. This is why The J-Star can be so brazen.

The Penang Chief Minister is spoiling for a fight with the Inspector General of Police. And he might just get his wish. The downside is that stray bullets from the shootout at OK Corral will cause innocent people to be hurt.

Guan Eng being the Dapster-gangster that he is, and Penang Chinese being the ‘exceptional’ (unlike everybody else in Malaysia) people that they are, both make for a very unfortunate match. The marriage between a DAP evangelista leadership and a contrarian Penang population is a recipe for disaster.

39 thoughts on “Guan Eng wants a fight with the police”